It's about love! In the year 2048, my main characters Ed and Tilda experience unexpected adventures in nine mysterious chambers of a museum that is the last refuge of humanity. Through their love - and thanks to the design classics of our ordinary modern life - the world might get a new chance indeed...

Humourous, seductive and direct, this is about love today, tomorrow and in all eternity. In flashback and flash-forward, this graphic novel goes back to the future and sets the present in intangible spaces: a Museum of Lost Things, neurological hemispheres and a nonexistent beach on an artificial island.

How will this be carried through?
The 'darkness' of this future world begins as a layer of black on paper, out of which I erase the figures, locations and narrative piece by piece. Through this technique of 'bringing to light', an image of floating timelessness and incorporeality is formed that questions our analogue assumptions and plays with the present, past and future.

J. Peter Schwalm, an internationally renowned composer of e-music, will complement selected episodes of the story with a digitally accessible audiovisual dimension. This is something new.

I'm creating a graphic novel - and doing it differently: together with you. Visitors to the museum bistro in the Frankfurt Museum of Applied Art will be the readers, listeners and collaborators on an exciting story about love, hope and the rescue of humankind! The museum collection plays a part and the hardcover edition concludes the project in 2015: a witty, artistic examination of our contemporary museum culture and of our expectations for the future.
My target group includes everyone who loves art, going to the museum and reading comics - as well as those who have their own ideas, are interested in the future and are curious about what we'll carry with us when we get there. You shouldn't be afraid of the dark or of playing a role in the story!

To be there at the birth of a truly outstanding venture. Particularly in the German-speaking part of the world, such a mixture of story-telling and museum work is unusual - and this particular project is unique.

In addition to the starting edition, financing ensures the conceptual and compositional work, material and the artistic execution of the graphic novel, including the actual studio work. And don't forget: your support secures the future of humanity!

What is special about this project?
The various participants and spaces (artists, curators, the city museum, the public, the present and the shared future) come together in a fully innovative way.
In an act of direct cooperation, artists and an exhibiting institution integrate museum work into the public realisation of a graphic novel that addresses museum culture as it impacts our daily life.
This premise not only points towards the future of such projects in the age of digital networking - it is itself applied art. Its crowdfunding shows new, accessible ways to fill gaps in the financing of smaller cultural projects without depending on public funds.

Drawings, exhibitions and film: images have steered almost my entire life. Born in 1967, I come from a family of artists - in which Felix Hartlaub, the Expressionist draughtsman and writer, already created graphic novels in the 1920s without referring to them as such. After studying at the HfG (Polytechnic of Design) in Offenbach, Germany and at St Martins College of Art in London, I have spent the past 20 years as a filmmaker in Frankfurt, New York and Barcelona.

At my side is the Frankfurt exhibition organiser and publicist, Florian Koch (born in 1967), who brought my work to a larger public in 2014 in a show that included images from the graphic novel. Florian Koch is a freelance manager in the field of arts and culture (www.kultur-am-main.de) and operates the non-book publishing company MeterMorphosen. He is a spin doctor, a consultant for dramaturgy and dialogue and is responsible for the project texts including press, marketing and e-communication.

The Frankfurt composer and music producer J. Peter Schwalm (born in 1970) creates Neue Musik for film, theatre and ballet in collaboration with international artists such as Brian Eno. His evocative sounds and rhythms brilliantly complement and suit the images in the world of '2048'.

The Museum of Applied Art, Frankfurt is an icon of contemporary architecture. Its main building was erected 30 years ago by Richard Meier as an anchor of the Frankfurt Museum Riverbank. In the novel, it plays a recurring and threefold important role: in 1986, in 2014 and in 2048 it stands - or, indeed, will stand - at the centre of our examination of basic questions about the cultivation of memory. Institutional collaboration on the project is provided by Matthias Wagner K, Director, by Martin Hegel, Director of Communication Design and Grit Weber, Manager of Press and Public Relations.

Further consultants and contributors include Heidi Hahn, human geneticist at the Frankfurt University Hospital; Benjamin List, chemist and director at the Max Planck Institutre for Carbon Research in Muehlheim an der Ruhr and Roland Wengenmayr, physicist, science journalist and draughtsman.

Publication: In the next eight months, sequences of the graphic novel will be published fortnightly in a groovy, rounded 70s format of 24 x 24cm. In addition, a digital sound file will accompany selected episodes and can be listened to on a smartphone or tablet. With a window view of the Frankfurt flea market on the Museum Riverbank outside, the graphic novel also becomes a utilitarian object in the Museum of Applied Art: each sequence will be offered as a tray lining - and spilled coffee will get you a new one! Each guest can collect and read them, listen to them and assemble them to a new and individual version of the story:

The future has already begun. 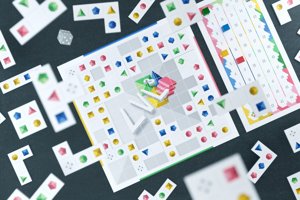 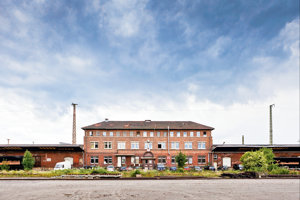 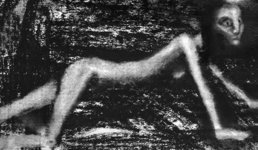 2048 - When It All Began. A graphic novel
www.startnext.com