To get on the summit of the „Blocky Mountains“ you'll have to take an adventurous trail – of blocks! Alongside a trapper and his animal companion, the grizzly bear, you will climb, slide, balance, rope down and swing to reach the summit. Who gets there first can not only enjoy an amazing view but also wins. A game by Gerhard Junker, with illustrations by Klemens Franz. The main infos to the game at a glance: www.juhu-spiele.de/downloads/blocky-mountains-info_en.pdf

„Blocky Mountains“ is a dexterity game for 1 to 4 adventurers from the age of 8. The game can be played alone (vs the mountain), against each other or together as a team. The team version offers up to 7 small and big adventurers on the trail to the summit. This version is suitable for adventurous kids from the age of 6. In a playful way the fine motor skills will be trained, with tricky tasks for either one hand or two hands at the same time. Grown ups can enjoy their new discovered instinctive feeling (or watch in awe as they realise how much better their little ones are doing with their skills).

The game play in a short version
1. The player picks up a route card and rebuilds the route pictured with the blocks.
2. He tries to master the route by moving the playing piece from start to finish.
3. Afterwards he turns around an owl token and moves on the named numbers with his route marker.
4. The next player decides whether he sticks with the already build up route or chooses a different one.
5. The game is played in rounds until one player reaches the summit with his route marker.

The owl watches over the game from the top of the „Blocky Mountains“ and decides how far you have to move on or backwards on the route plan. And adds, next to a good portion of skills, some taste of luck to the game. The squirrels are helping you, when it gets a bit tricky …

The goal of the game is, of course, reaching the summit of the „Blocky Mountains“ – what else?! And the project is meant for everybody who wants to be playing with toy blocks in a different way once again.

Because of the different levels of difficulty the game can be played from the age of 6, 7 or 8 and offers the kids to grow along the game. The routes are challenging for older kids as well as grown ups (even Grandpa and Grandma) and are turning „Blocky Mountains“ into an adventure game for the whole family. Even typical games grouches can easily get involved by the easy rules, the high quality material and the new range of playing opportunities.

Aside of skill the players will also need a bit of courage to make their way up to the summit. On a side effect the young player will need a bit of self-evaluation. The game itself is thrilling and varied – there are no borders for creativity as the players can create different ways and tasks themselves. You can find many tips in the route planner – the accompanying book – with many ideas for planning and building your own routes (check the rewards).

Some of the bigger games publisher did check the prototype of the game and it took them many months to test it. The main argument why they could not take it into their publishing programm was the amount of material. Lots of wood and difficult to (mass)produce gaming components. Both game characters, the trapper and the grizzly bear, can't be mass produced with the needed eyelet. It has to be done by hand on every single wooden pawn. Same goes for the poles and the rope, they can't be done „ready-made“, they were invented for this special game. And this is for everyone, who wants to enjoy a special gaming experience. To be able to produce this game for you guys, we need your support! A big thank you to everyone who already supported us and all of your friends, who will in the future!

From the idea to publishing
Creating this game was a huge joy: it started with simple building blocks in the childrens room; another inspiration was the famous fishing game. The original idea of the game „Blocky Mountains“ was combining building and fishing. The fishing line turned into the climbing rope … the building blocks got bigger and got different shapes … thats how the ways to the mountain top developed. A bridge made of ice, a rock crevice and a door made of rock; the bear cave, the ridge walk, the eagle's nest, the waterfall and many more. Many opportunities for action filled with game fun, a wooden disc … and the trapper, who is able to flip things.

If you want to share the enthusiasm of the author and all those people who had the chance to play the game during the process of developing on different game fairs (i.e. the Suisse Toy 2011 in Bern) and other events, then please support this project. Only with your help we can publish this game! Thanks to all the people who already helped us getting this far for their support, critic and enthusiasm during the many nights of gaming. More information about the game and also photos of some test matches: www.boardgamegeek.com/boardgame/144223/blocky-mountains

You have the chance to pursuit the game „Blocky Mountains“ to reasonable conditions. If it will be published on the market it will be more expensive, as the additional game materials won't be included in the price (see Stretch Goals).

The presented game materials of the prototype are already developed on a high level. The graphics of the routes (isometrical illustration) are completed. For an even more atmospheric gaming experience, Klemens Franz (a well-known illustrator of games) will be doing new illustrations of the game box, the double-sided route plan and the backside of the route cards. His fee is included in the funding.

The money will also be used in the producing of the games. The first edition is planned with 500 games: Made in Germany. Of course, only high quality materials are used, such as beechwood for the blocks and the poles as well as nontoxic paint and varnish (eco-certified water-borne coating). The finished product of the first edition will be send to spiel gut® (Arbeitsausschuß Kinderspiel + Spielzeug e.V.) for checking.

The basic game offers lots of fun for the little ones as well as for grown ups. If the goal of the project will be overfinanced on Startnext, there will be added more route cards and a big yellow block – the rock slide – to add even more variety to the game, as well as an alternative route plan. These materials can be added by your own choice and the rising level of difficulty will be challenging even for the skill pros. (If the crowdfunding will be sucessfull we can all become pros by playing this game over and over again!) And last but not least the route planner will be added with bonus routes once the project will be overfinanced (check the rewards).

Expected delivery of the finished games (as the case may be: including additional game material): november 2013

Gerhard Junker (game developing and graphics)
Since 1998 he works as a freelance graphic-designer and illustrator; married and father of a daughter (in whose childrens room this game was born). Long before the idea of „Blocky Mountains“ came along, he designed board games in an advertising agency and also many books. Being a member of the Game Designer Association (SAZ) he helps organizing fairy stands on the Spielemesse in Stuttgart and helped creating the graphical realisation of the national wide gaming day „Stadt-Land-Spielt!“.

Klemens Franz (illustration)
Since 2010 he works as a freelancer, married and surrounded by many children and four-legged friends. Before, during and after that he has illustrated numerous games (such as Agricola, At the Gates of Loyang, Luna, Milestones and Flinke Fliegen). The direct link to his work: www.atelier198.com

Susanne Junker (support and advice)
Married to the author of the game and having a massive impact on the development of the game. Being the biggest critic there is no way around her. If she likes something, you know you're on the right way. She also stands for every single person who had the chance to try out the game (especially the kids). 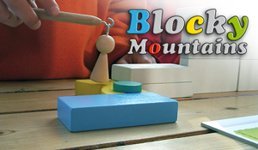