<% user.display_name %>
Log in
Music
Julius Windischs Fenster is a piano trio based in Berlin. We are crowdfunding money for our first album that is going to be released in September 2021.

Thank you all so much for supporting my new Trio record!
I'm amazed by how much money has come together through all of you! Before doing this Crowdfunding I wouldn't have imagined it was actually going to work. But it did!

Right now we are in the process of designing the artwork (with the great https://leaverholen.com/) for the CD, which will hopefully be printed by May or June. The official release is in September 2021 at the time the September issue of the magazine Jazzthing comes out. For some Jazzthing subscribers the CD will also be in this issue. This album is a cooperation between Jazzthing Next Generation, DoubleMoon Records & me. There will also be a longer feature about myself and my album in the september issue of Jazzthing.

All the supporters who ordered CDs or other things that can be sent by mail or e-mail will receive them around July (or earlier).

If nothing goes terribly wrong I'll be starting a new concert series with the great bass player Robert Lucaciu from the end of April. It will always feature great musicians from the Berlin or german scene and the two of us. In April Cansu Tanrikulu and Evi Filippou will join us. We'll be either streaming concerts or doing them with a live-audience (as soon as this is allowed again) once a month. It will take place in Rotbart in Neukölln. Follow me on social media or check my website for any updates on this.

In 3 weeks I'm recording a new record with my Quartet. You can listen to the previous one here: https://juliuswindisch.bandcamp.com/album/chaos

In July I'll be recording the music of Wolfgang Rihm with the singer Friederike Merz. Among other things we will record the Lavant Lieder Zyklus. Rihm composed this in 2001 and it features beautiful poems by Christine Lavant from "Die Bettlerschale". This Liederzyklus has never been recorded before. It is also the first recording I'm doing with classical music.

Looking forward to seeing you all again soon either online or in real life.

All the very best,
Julius 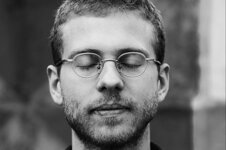