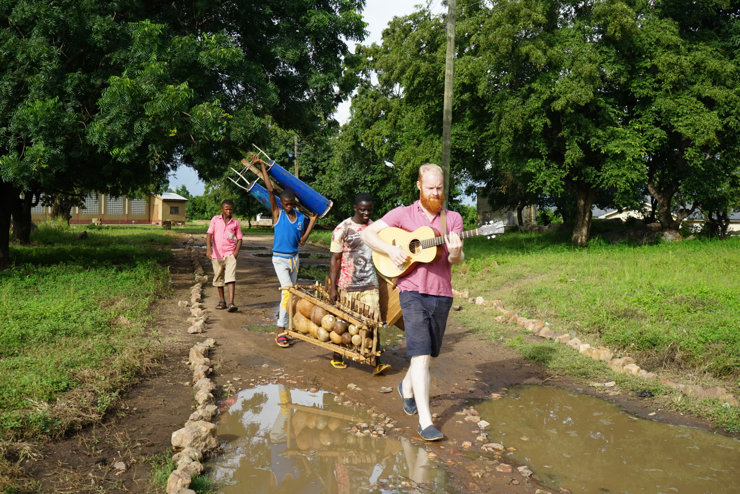 Up early from my messed up body clock and if I’m honest, excitement, I grabbed breakfast and ask for the keys. Father Eugene had offered the church as it wasn’t in use and was the only building with reliable electricity. The night before, to my dislike, he’d asked one of the young boys who drummed in church to join us (I’d just found a decent musician, I didn’t want some kid spoiling it.)

I took my equipment and coffee over and set up. Rather punctually, Bernard turned up and set up. Making sure he didn’t bother me with relentless bashing, I put him to work gathering the bedroom fans to use as mic stands. And by just after ten, with my silent assistant’s help, we were ready. Ready that is, if we had a xylophonist… or xylophone, even.

Redressing Bernard’s punctuality, and it just being Africa, Isaac was ‘late’. The day before we’d agreed to meet at ten. Between ten and twelve actually, which seemed an unduly large window, but what I realised meant “Get here at ten if you want. We’ll be here at 12.”

So to pass the time and to give Bernard a chance I ask him to play. The kit was too loud and tired, so I ask him to have a go on a pair of metal congas parcel taped to within an inch of existence. He was good. Really good. Not only did he groove he made a nice sound from these glorified tins. As we played his friend joined in with some even more rattley drums making one of the best bubbling, intertwining rhythms I’ve heard.

For the next three days, we played, sometimes four, sometimes three, sometimes two of us when the boys were at school, and recorded the album. As I locked up after the first day I didn’t quite believe it. This was something special.