Crowdfunding finished
We are creating a 2in1 Covid and Flu LAMP test – important for rapid, correct treatment especially for at-risk groups like the elderly, pre-sick and young children. It is faster, cheaper and simpler than the gold standard PCR and more reliable than antigen tests. Thus, we relieve the burden on medical staff and diagnostics worldwide. The Corona test is already complete. With your donations and our knowledge, it will become a combination test. Will you join us? Together we can create the 2in1!

With your donation we expand our Corona test with the extra line on the test strip to 2in1 Covid and Flu.

Fever, cough or cold – what's the cause, Flu or Covid? In fall and winter, when both waves meet, it is difficult to make a diagnosis for the right treatment based on symptoms. However, this is especially important for high-risk groups, such as the elderly, with pre-existing condition and children under the age of 5.
To be safe, PCRs are used in such cases, but this method is laborious, expensive and time-consuming. A precise and fast result is important for the proper treatment. Because high infection rates quickly lead to overload of medical staff, test centers and laboratories. As a consequence, valuable time is lost.
For this reason, we are developing a 2in1 test that can distinguish between covid and influenza simultaneously, reliably and quickly.

The test we are counting on is called LAMP (loop-mediated isothermal amplification). It is more sensitive and reliable than the antigen rapid test as we know it from test centers, but easier and faster than the gold standard PCR – for us it is the golden mean!
We have already developed the test for the different SARS-CoV-2 variants. We now want to combine it 2in1 with the detection of Influenza – our test can distinguish between the two pathogens and we will quickly know: Its Covid or Flu!

How does it work?

We use simple anterior nasal swabs in which we detect the viral genome by doubling it many times. In contrast to PCR, however, we do not need any complex preparation of the samples, simple heating up is sufficient. Our LAMP amplifies only genetic material of the SARS-CoV-2 and Influenza A/B viruses and has a high accuracy. By selecting so-called primers, our scientists ensure that false positive results are very rare, so the test has a very high specificity.
For the amplification, with which we detect even a few pathogens in the sample, a simple heating block and pipettes are sufficient – high-tech equipment is not necessary.

To easily show the result, we combine the LAMP with a test strip (lateral flow dipstick LFD). If viruses are present in the sample, a clear red line appears, similar to the antigen rapid test. In addition to the internal control line on the strip, as known from antigen tests, we have added an extra safety level – a third line indicates whether the swab from the nose was successful. This makes our test particularly reliable. The test is also fast; we know the exact result in less than an hour. And because it's so simple and doesn't require a sophisticated laboratory, it not only saves money, but can also be performed directly on site, for example in doctors' offices or nursing homes.

To bring 2detect to life, we need your support. Are you with us?

So far, the LAMP test has not yet arrived in routine diagnostics – we aim to change that. The quick and easy procedure enables use directly on site, for example in doctors' offices or nursing homes. Long waiting times and high costs are avoided and targeted, proper treatment can start sooner. With our 2in1 Covid and Flu Test, we make a valuable contribution to ensure that this important differential diagnosis reaches many people.

You are a science enthusiast and super excited about research and development, our project is just right for you.

If good medical care and the relief of staff is as important to you, then help us with your donation.

Good and affordable diagnostics are a valuable building block of a healthy, fair and sustainable society. Current, reliable methods are associated with high effort and costs and are thus not available to everybody.
Our simple, cost-effective and robust test is ideally suited for use in developing and emerging countries, where good diagnostics is often a luxury for the rich – we want to change that together with you!
Our LAMP has great potential. It is flexible and can be quickly adapted to other pathogens. This will strengthen diagnostics, not only locally, but worldwide.
With your support, you make an important contribution that makes the world a bit fairer, ensuring that good diagnostics and thus the right treatments are accessible to all.

We have already established the LAMP for the Corona variants – with its help we can show whether the sample is positive, regardless if there is alpha, beta, delta or omicron in the sample. The successful crowdfunding campaign helps us to combine our 2in1 test with simultaneous detection of Influenza. There are different variants of Influenza as well, two of them, Influenza A and B cause most severe infections. Therefore, we choose A+B for our 2in1.
For the combination test, we need a test strip that not only shows Covid and the controls, but also shows the Influenza viruses on a separate line. We are planning about three months to develop the test strip together with a cooperation partner. Once the strip is ready, it must of course be extensively tested in the lab.

Some important questions we are addressing:

a) Does the new, additional line appear reliably when Influenza viruses are in the sample and does the strip remain blank at the site when the sample is negative?

b) How sensitive is the new Flu test? Sensitivity indicates the percentage of infected individuals in which a test actually detects the infection.

c) Can our combination test reliably distinguish between Covid and Influenza in any given sample? If both viruses – Influenza and SARS-CoV-2 – are present, do both lines appear on the test strip?

The numerous tests will show whether the 2in1 does what we want it to do. If not, we will have to adapt and modify it – for these tests and adaptations we plan another 3 months. At the end of the project, the prototype will be ready – this will enable us to find a manufacturer for official approval. This makes the test accessible to everyone.

Your support for this project? Every donation counts and helps to make good 2in1 diagnostics for Covid and Flu a reality!

Lena, Jost and Dirk have been studying plant viruses in Aachen and Münster for many years. One focus of this research is the development of simple and fast LAMP tests that show whether plants are infected with viruses. With the onset of the Corona pandemic in March 2020, we modified our LAMP for the Corona virus, the field test with patient samples was successful – quickly and reliably the line turned red! Dewi is our young researcher, in her bachelor thesis she worked on the development of our LAMP test, additionally she is our expert for social media. Birgit in her former life also a scientist, supports the team in many things, especially in communication. With camera and pen she follows our exciting research, that we make big together.

We all work at the Fraunhofer Institute for Molecular Biology and Applied Ecology IME, which conducts applied life sciences from molecule to ecosystem in the fields of agriculture, bioeconomy, chemistry, and environmental and consumer protection.

Prof. Dr. Dirk Prüfer
What are the sustainable development goals of this project?

Why does this project contribute to this goal?

The pandemic has drastically shown us how much our health is linked to all areas of life and how crucial a functioning healthcare system is. Our 2detect project opens up the opportunity for everyone to benefit from good, affordable diagnostics. Quick, easy, and accurate, it enables doctors everywhere to start the right treatment – in our case Covid or Flu – immediately. This is how WE can improve global health. 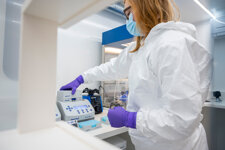