Crowdfunding finished
In “Ace Up My Sleeve” Grace faces the everyday challenges of a sex-oriented society as an asexual person and pushes her limits to adapt. We are looking for financial support to realize one of the first short films about asexuality in the best possible way. The goal is to gain attention and understanding for the underrepresented sexuality and to break with clichés.

Asexuality is a sexual orientation in which there is little or no sexual attraction. Since this orientation is underrepresented and stigmatized, many people find it difficult to identify with the spectrum and not be misled by social pressure. The film brings the viewer closer to the topic of asexuality and emphasizes how unintentional pressure is exerted in a sexually oriented society.
Whether in music, in the media, on social media or while playing “spin the bottle” with friends: “Sex sells!”. If this is not your case, it will not be understood by others and will be associated with prejudice. So it happens that many people of all ages feel pressure to become sexually active in order to belong. We often find ourselves transferring our norms to other people and judging by our own standards. The most important rule to avoid a conflict is to put yourself in the shoes of your counterpart and not to infer others from yourself. Why can't we approach people who feel different in the same way?
Based on the protagonist Grace, the aim is to show how difficult it is to find one's own place in a norm-setting society as a person who thinks or feels differently. The viewer accompanies her in her everyday life and shows the challenges she has to face as an asexual person in a sexually oriented society.
It is made clear that the film doesn’t criticize the sexualized society. Instead it shows how difficult it is to find your own way in a society with a lack of understanding of asexuality. The 24-year-old protagonist Grace wants to take the burden off her shoulders as a virgin and goes to her limits. The step to self-acceptance is a challenge of its own here. Asexuality is felt to be not an option, as it has no representation in our society today and sexual experience is an important social status symbol. Asexuality has also received little attention in the LGBTQ + community.
In the course of the film it was consciously decided not to drop the term “asexuality” so that Grace's journey of self-discovery does not end with another label. Thus, the film can be transferred to many subject areas.

It was not easy to define a specific target group. Of course, this consists on the one hand of people who feel they belong to the asexual spectrum. On the other hand, we are consciously aiming to use this short film to increase awareness of an unknown sexuality and to show that you shouldn't allow yourself to be influenced by pressure of any kind in self-discovery. Since teenagers already deal with sexual issues and are sexually active at an early age, we have come to the decision to define the age of the target group from 13 years upwards. We deliberately do not want to make any gender or gender-specific provisions in the target group. This is due to the fact that we want to stand up for all genders and therefore want to address every person regardless of gender.

When we, the two team leaders Sophie Gusenko and Maria Groß, talked in November 2018 about how often you feel pressure when it comes to sexuality, we also came to the topic asexuality. Even in Berlin and in a generation where many are fighting for equality, this sexual orientation is unknown and / or linked to prejudice. After we had a lot of feedback on this unknown and unexplored topic, we decided to exploit the full potential of the project, to take our money and implement the project in the best possible way together with our team. Many people should be reached with the topic in order to increase the awareness for asexuality. In this way, people (whether allo- or asexual) who feel the pressure of the sexually oriented society are met with understanding and acceptance. The films shows, that you shouldn't let yourself be misled by pressure, because it doesn't "heal" you in order to motivate people to act consciously out of their own will. It should also encourage people who actively or passively exert pressure to reflect on their actions and comments in order to avoid such in the future. This creates a space, whether in partnerships or groups of friends, in which all people feel free to communicate their needs and openly talk about their sexuality without having the feeling of being judged.
The budget of the project, which we have so far taken on from our own hands, is intended to cover the expenses for technology, set design, catering, corona measures, etc.

Of course we want to give the film the attention it deserves. A film premiere is planned in Berlin at which the film will be presented to the public. We would also like to invite representatives of local LGBTQ + initiatives.
It should also be submitted to various national and international film festivals. Furthermore we are looking at festivals with a special section for short films and LGBTQ + content. Based on the feedback, we will decide whether the film will be passed on to other festivals or whether we should also consider direct submission.
When all the festivals are over, we will also publish the film online.
We are also concerned with exploitation in the sense of non-profit, because one of our greatest motivations for the production of this short film is to counteract the still prevailing, great lack of understanding and the unfamiliarity of this sexuality. That is why we want to give as many people as possible access to this film in order to further increase awareness and understanding of this sexuality.
To this end, we will contact LGTBQ + associations and talk to them about possible further dissemination.

Behind the project are the project managers Sophie Gusenko as a director, screenwriter and actress and Maria Groß as a producer, as well as a highly motivated, young team consisting of 28 people in the crew, 14 actors and approx. 30 extras. These include students from various universities in and around Berlin, as well as professional filmmakers from various departments. It started in October 2019 as a small student project from the hands of two ambitious young women and is now developing into a strong debut film with a rising momentum thanks to the team and our supporters. 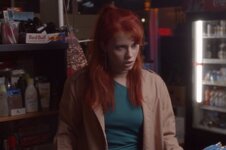