AIRLORDS OF AIRIA is a fast-paced mix of science fiction, fantasy and steampunk elements. The film shows an alternate reality in which people, their technology and their world have developed a different direction. The world of Airlords is similar to the ideas HG Wells and Jules Verne had in the19th century about utopias and how the future could be.

Airlord Karak, admiral of a fleet of airships, discovered a powerful ancient weapon on an expedition. After he conquered the Wodnik 7 naval base, he plots to seize power of the Airia Republic and drag the entire continent into war. Lura the chief of police joins forces with a gang of smugglers in order to thwart the power-hungry admiral’s plans.
The concept for Airlords has been in Dirk's mind for some time. During his design studies in 1996, he drew a steampunk comic called, “Wodnik 7” where even then the characters of police chief Lura and Admiral Karak were involved in fierce combat in a retro-futuristic world.

AIRLORDS OF AIRIA is planned as a full-length feature film and is currently still being developed. We have created an elaborate short film as a "mood tape" to illustrate the idea that will eventually become a 90-minute feature film. Because the film takes place almost entirely in exotic fantasy locations and the costs for complex scenes and outside shooting would break the budget, all the scenes for the short film were filmed with amateur actors against greenscreen, while the backgrounds were created digitally on a computer. When possible, the final full length movie is planned to be shot on real locations with real scenery and with a well-known cast. To create the perfect illusion of a fantasy world, elaborate digital effects will be used. This crowdfunding campaign is also intended to find out if we can attract a large enough audience that would be interested in a possible feature film AIRLORDS OF AIRIA. When we are successful with this campaign and the realization of our movie is closer, we will likely do more Crowdfunding actions. Supporters will have the opportunity to participate in the development of the feature film project. During the first crowdfunding campaign we will open a closed A.O.A.-facebook group.

The ambitious film project AIRLORDS OF ARIA is directly at all fans of the great science fiction, fantasy and adventure cinema. The exciting story, exotic locations, flashy characters, whimsical retro-looking technology and an independent style make AIRLORDS OF AIRIA an unforgettable film experience. With your financial and moral support, the short film will be completed this year and we can soon celebrate its premiere.
During the development of the feature film project we want to incorporate our supporters. Ideas and proposals we like, could be integrated in the feature film. Supporter with special skills, which could be useful for the project, are welcome to us.

60% of the short film was already completed and paid for by private funds. To complete the 10-minute short film, some scenes still have to be filmed, many VFX images must be time-consumingly animated, rendered, composited and color-corrected, as well as FX sound, music and voiceover recordings still must to be produced. Because the movie is supposed to speak to an international audience, experienced English "native speaker" will be synchronized over the German actors’ voices. In addition, a promotional tour (travel costs, equipment, fan merchandise, web site) is planned to find co-producers and financiers to implement the costly film. Every residual cent of the suggested 10,000€ goal will be re-invested into the further development of the feature film project.

Dirk Mueller has been active as a visual effects artist and -supervisor in the film industry since 1999. He has been involved in the effects of more than 60 cinema and TV films, including SCHUH DES MANITU, LUTHER, PERIODE 1 and NANGA PARBAT. 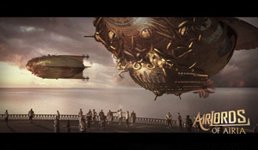