Crowdfunding finished
For 20 years, the station stood empty, was constantly plagued by vandals and fell more and more into disrepair. We are now putting an end to this. The station should be filled with life again and be a place where people can share their skills, their music and art, and their stories. We want to create a space for what connects us as humans.

For the past year we have been working hard to make a cultural centre blossom in the train station: a cultural station where people get to know and inspire each other through art and culture. We have already opened a beer garden and organised several festivals and concerts - with great success! Soon we also want to offer concerts, art exhibitions and much more in the reception hall.

20 years ago there was a fire at Leisnig station. After that, the trains continued to stop, but the building lost its use as a station and was inaccessible to the public. The restaurant and pub closed, the operating facilities were relocated and automated, and the families who had lived upstairs until then moved out. What was left was an empty building, which was plagued by vandalism and fell more and more into disrepair.

When we, a group of four musicians, first laid eyes on the station in February 2020, we all immediately fell in love with this beautiful building and made it our mission to put an end to the decay. The station should be preserved and accessible for everyone. People should be able to meet and exchange ideas here, people should feel welcome here.

Our project is about saving this unique place from decay. But it is also about social cohesion, about meeting and exchanging with people we know and don't know, about contact between young and old, about the unifying power of music and art, about preventing rural flight.

We want to open up the reception hall to everyone so that travellers can get to the tracks the fastest way possible and so that we can use the hall as an event space. But before this can happen, we need to renovate the hall. For this we need your help!

The old passages and skylights, which are either boarded or bricked up, will be opened and new doors and windows will be installed so that the room becomes light again and regains its original character. The walls will be re-plastered. Solar panels may also be installed on the roof. The main entrance will be barrier-free so that people in wheelchairs can reach the platform or take part in the cultural events.

Whenever we open the doors to the hall, everyone enjoys this unique space: old and young Leisnig residents, cyclists and tourists, culture and train enthusiasts. The hall, with its historic wooden ceiling, its original cement tiles and its magical atmosphere, should be made tangible for everyone.

The city of Leisnig and the revitalisation of the rural area are very close to our hearts. We care about people, art and culture. With our project, we want to bring the best of everything together in one place.

This project is about the restoration of the historic station reception hall - culture needs public and shared spaces where it can flourish. People need places where they can engage in conversation, where they feel welcome and where they can spontaneously make music together. By supporting our project, you are helping us to create just such a place. The restoration of the reception hall is the first step towards realising our ambitious plan.

The contribution that art and culture make to the community is becoming increasingly important in times of increasing digitalisation, division and isolation. An environment characterised by appreciation, openness and trust is the fertile ground on which art, creativity and inspiration can flourish. This is exactly what we want to make possible at the Kulturbahnhof Leisnig.

Both from an architectural and historical point of view, the preservation of this unique cultural monument is of great importance. The station tells the story of the town of Leisnig and can be a symbol of the region.

Our project is a positive example of how people can preserve their home and place of residence through cooperation and cohesion and preserve it for future generations.

The money we receive through this Startnext campaign is only part of what we need for the complete renovation of the heritage protected reception hall. At the same time, we are still applying for various funding programmes, such as LEADER, KfW and monument funding.

In addition to the funds we have applied for, we have to contribute about € 100,000 of our own. For the restoration of the reception hall, the most important thing is, of course, to renovate and cover the roof as quickly as possible. For this, we need to reach the first target sum of this crowdfunding campaign. Everything we raise beyond that will be used for the other trades.
The money raised will enable us to cover planning, material and labour costs for the following trades:

In July 2020, together with a few other committed individuals, we founded the non-profit Kulturbahnhof Leisnig e.V.. Its mission is to promote the renovation and restoration of the station and to create cultural projects. The association offers high-quality cultural events, concerts, music and dance workshops with well-known artists and lecturers from all over Europe.
In addition, the cultural centre creates a space for local cultural initiatives, youth clubs and cultural workers in the region. The station allows local traders a framework to offer products and services and creates jobs. It is important to us that the project is sustainably integrated into the local community and beyond, bringing added value to the region!

In addition, we are involved in the global folk community. Organisations we work with are: 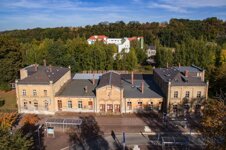