A shorten version of Memoirs of the Baroness d'Oberkirch is to be published for the first time in German. The memoirs are known as a source for information on life at the French court before the revolution of 1789 and on the youth of Grand Duchess Maria Feodorovna. The translation will be released to the Public Domain 70 months after initial publishing.

Henriette Louise de Waldner de Waldenstein, later Baronne d'Oberkirch, was born 1754 close to Thann in Alsace in a nobel Lutherian family. She was a friend of Sophie Dorothea of Württemberg, the future Empress of Russia Maria Feodorowna, corresponded with Goethe, and acted as a connector between the French and Russian Courts, met Lady Carven in Montbéliard and Paris.

Although the Baroness spoke fluently German, her memoirs - first published 1852 in English and 1853 in French - never got translated to German. Goal of the project is to finance a public domain version of her memoirs in German.
All translation works and notes will be released to the public domain 70 months after frist publication (Creative Commons Attribution 4.0 International License, see http://creativecommons.org/licenses/by/4.0/). The 70-month-periode is thought to enable a broader commercial and non-commercial use of her memoirs in German while giving supporters a time-limited exclusive access to thank their support. If project goals get over-funded additional text parts will be translated.

More information on the Baroness and her work: http://en.wikipedia.org/wiki/Henriette_Louise_de_Waldner_de_Freundstein

The project goal is to publish a first German edition of the memoirs by 31. December 2014. This edition will be limited to around 70 pages. Text will be translated to German from French by a professional literature translator. Translation will be proof-read. Notes will be re-worked for a German-speaking audience. Further information are provided in the German section of the project (German flag on the top left corner of this page).

There are many good reasons to support this project.

100% Funding
Money will be used for translation, administration and print.

In the event of over-funding, extra funds will be used to add pages to the translation scope. Up to 55 additional pages will be made available to all backers without additional cost. Backers with paperback books will also be upgraded cost-free to the extended version:

I (François Vigneron) start the project and stand behind it with a small team that is still being built. Part of it is my wife and a couple of friends who are to support proof reading. New team members are welcome.

Go, spread the word and get involved! 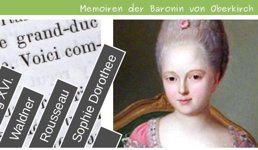