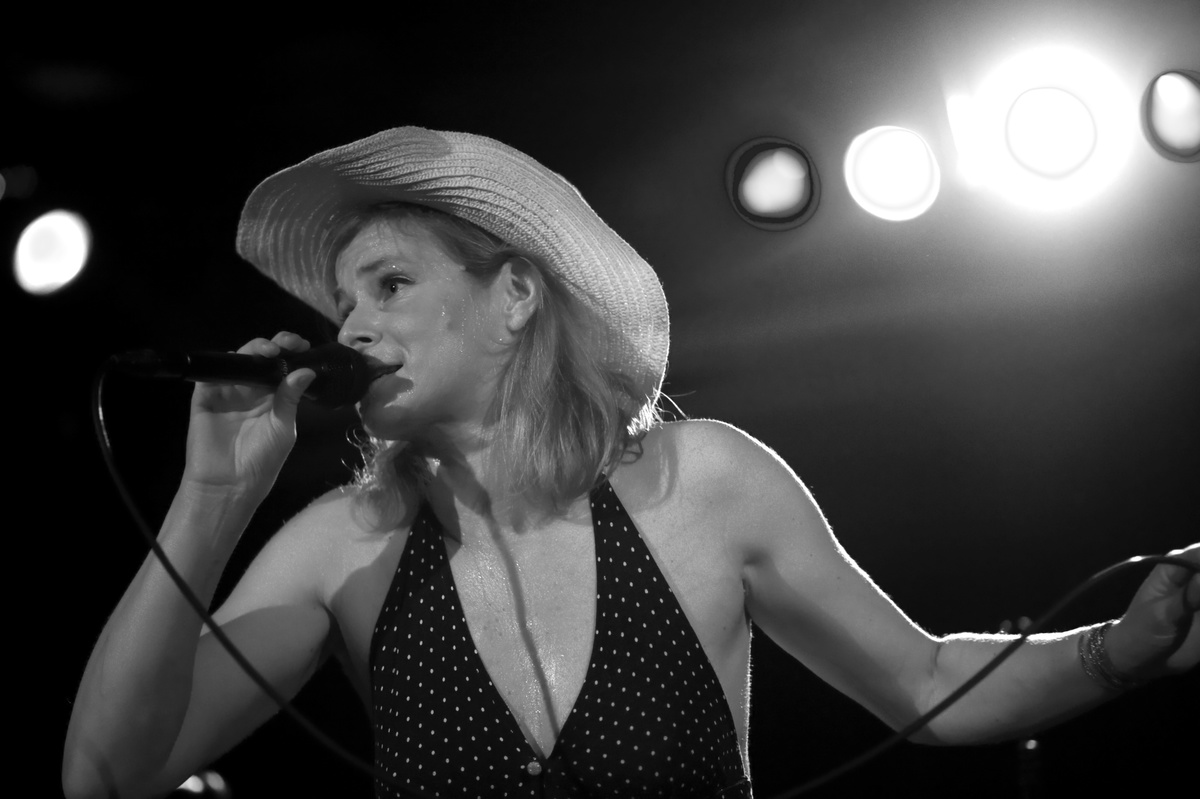 With your support I want to finalize the studio production of my new Bernadette La Hengst album, planned for release in autumn 2015. As long as our focus is money and not time and as long as we don’t get a basic income granted, I need you as my backers, my producers, my crowdfunders!

Since my last album „Integrate me Baby“ of 2012 I have collected many songs—so the time has come to release a new Bernadette La Hengst album. I’m not finished yet, but I can reveal to you some of the details: There will be some hits out of my theatre project „Basic Singing Income Granted“, as well as a lovesong from the view of an african refugee called „We Gonna Stay Here“, one other lovesong to the umbrella revolution in Hongkong called „Streets of Hongkong“ and an anthem for global action on climate change „Save the World with this Melody". The music already sounds wide and big, without loosing textual precision and a strong dance tradition; violins and synthesizers, chanson and electronic beats.
(Ex) Pressing my life in an album format, every three years, is like the pop music itself becoming more and more a luxury good. But I refuse to give up! I still have the passion and believe in the power of the album format, the musical playground for all my different ‚agitation chansons‘ as well as an perfect vehicle for the theatre productions that give voice to so many peoples hopes and dreams for their world.
Your support will play a key role in financing the costs of the time and the people needed in the recording studio to realize my new album. Together with my co-producer Peta Devlin (ex-Die Braut haut ins Auge) and a few extraordinary guest musicians I will be recording my album between Berlin and Hamburg with the aim of releasing it in autumn this year.

My new album will be like the my previous albums: a mixture of songs composed or inspired by different theatre projects and other stand alone songs without a theatre connection. It would be great to reach all people who already love my music or will love my music in future: people inspired by the idea that you must dance to realize the revolution we need.
Here are a few sentences about who I am for those who are just getting to know me:
„... Straight, angry, sentimental, broken, crazy, humorous and subversiv – and along with it: a beer.“
Arte
„... Easily her songs are a balancing act between personal and political. And: They give us hope.“ Spex
...From sunny to cloudy she just sounds at the surface. Truly Bernadette La Hengst is the queen of discours-chansons.“ Die Zeit

I have always believed and supported the aims, values and aspirations of small independant record labels. But there finances are limited and increasingly stretched in today’s society. That is why I decided to fund the recording and mixing of my new album with your help in order to stay independant and stay true to the Bernadette La Hengst soundI don’t know yet which label will release the new album, but I hope through the crowdfunding site Startnext I will (re)activate new and old fans to help further spread my songs through the world.

The money will pay the rent for my own studio in Berlin, where I will record the lion’s share of my album. It will also cover the costs of the additional recordings and mixing in the Hamburg studio of my co-producer Peta Devlin. I will also be paying additional recordings in P4 studio Nalepastraße in Berlin and above all I want to properly pay my guest musicians like the violonist Ruth May, the cellist Claudia Wiedemer, the drummer Wanja Saatkamp or the Ladettes backing singers Bettina Grahs and Godehard Giese.
If I achieve over and above my campaign goal of 7.500 Euros, I will finance an additional music video production by Wanja Saatkamp.

Bernadette La Hengst
I have been a musician for over 25 years and have lived in Berlin since 2004: during the 1990s I was the singer and guitarist of the Hamburg-based girl-pop-punk-band „Die Braut haut ins Auge“ (the bride strikes in the eye). Since 2000 I have released 4 solo albums brining my own brand of disco-agitation-chansons into the world as Bernadette La Hengst.
Today digitalisation makes it more and more difficult to live from writing and performing music—one reason why my second stage and home has been the theatre for the past 10 years..
Some of the songs that I compose for theatre projects, end up on my new albums where I bring through music and lyrics the myriad of sociaI and political problems facing today’s world to a wider audience. Many of these musical and theatrical projects involve the voices and reflections of non professionals (laypeople) and professional actors/actresses. They include the Beggars Opera“ (2008, theatre Freiburg), „Planet of Women“ (2012, theatre Freiburg), „Integrate me Baby“ (2011, Thalia theatre Hamburg) and „Basic Singing Income Granted“ (2013, Sophiensaele Berlin) 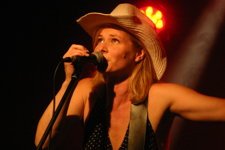