Crowdfunding finished
We‘re ready! Our spontaneous Corona Idea to record a CD with our Chamber Orchester played out in co-production with Hr-2-Kultur in 3 months. With 26 outstanding musicians, 3 conductors, and a multi-talented organizational team. We received additional support from the Hessen Culture foundation and the Frankfurt office for Multicultural affairs. Now we‘re only missing you, and the whole event will be rounded off.

It’s about nothing less than the first CD release of our Bridges Chamber Orchestra: an expert of diversity. Through their instruments from the Orient and Occident, Latin America and Asia, as well as their musical educations in various musical genres; our musicians have expertise in European, Arabic, Persian, classical, as well as jazz, folk, and contemporary music. Among the members are 12 composers and arrangers from seven different countries, whose works, tailor-made for our ensemble, were recorded in the summer and are now being released on CD. Many supporters and sponsers have accompanied us along the way, and for the last step, CD printing and promotion, we’ll mobilize the crowd!

This CD Publication during the Corona restrictions - in a time with many concert cancellations, reduced concert engagements and audience numbers - is aimed at providing our Orchestra and our voice with a platform to be heard. It is also our goal to reach new listeners, who bring curiousity and openness for music that is characterized by an unconventional fusion of instruments. Apart from that, we have been asked so often about CDs, that now finally we can say: “Tadaaa! Here it is!”

In Corona-times, interaction within a pluralistic society is complicated with distance and disconnect. Especially four our members with migration and flight history, the current situation means a severe setback in their progress in social and artistic integration and participation and poses the danger that the contributions of immigrated artists are pushed aside due to corona-related cuts. The recognition of the service of immigrant artists to our German cultural landscape is an important aspect in the fight against xenophobic tendencies. At the same time, our artists are a significant role model character for other migrants and refugees- especially when, as with bridges, the musicians don’t disappear into European system of mainstream music, but are able to develop the signatures of their individual music cultures as a resource. For this gives confidence – confidence, to arrive in Germany, to be heard, and to feel at home and it gives self-confidence to be able to preserve and incorporate your own (cultural) roots.

The disc needs a box! We need your contribution for the manufacturing of the CD. Additionally for the design of a corresponding CD cover and booklet as well as the GEMA (The Society for Music Performance) Fees. Should we also reach our second funding goal, we would also be able to cover the remaining personnel costs that left us with a hole in our budget - but whoever hears the CD will know: it was worth it!

The Bridges Chamber Orchestra is part of the Frankfurt music initiative Bridges - Musik verbindet. Since the beginning of 2016, this initiative has been bringing together musicians with and without a history of flight or migration to make music together and has since played around 300 concerts in Germany and abroad. From refugee housing, to the Frankfurt Alte Oper, to the German National Government; from concert series in Frankfurt venues and museums, to international festivals in Italy and Uzbekistan.
We are committed to a musical dialogue that makes the potential of our diverse community accessible and illustrates the success of an inclusive society. The distinguishing feature of our music is the Bridges sound, which is created by blending both European and non-European instruments. 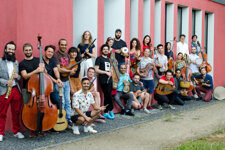