Crowdfunding finished
"Bridges – music connects" is an intercultural music initiative based in Frankfurt am Main. We connect refugee and local musicians – so strangers become friends. Bridges engages in a musical dialogue based on cultural diversities and backgrounds. As a result a new special sound has been created which can now be appreciated in concert. 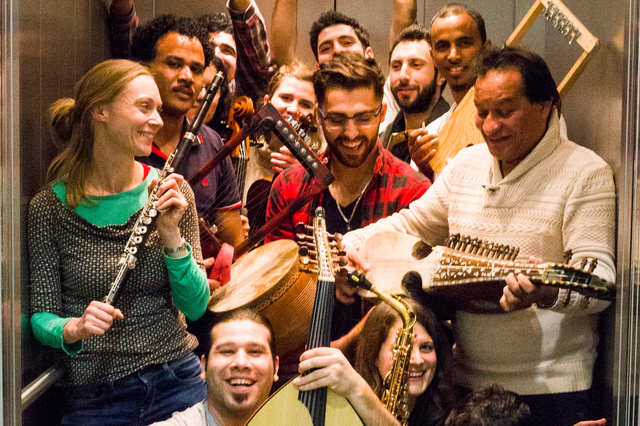 At Bridges more than 80 professional musicians from nine countries all over the world play together - about half of them had to flee from their homes. By means of this project they can integrate their talents and potentials into society and perhaps secure their professional future. Besides, local musicians also profit from these, so far unknown, musical influences: a new musical sound has been created which will be a special experience to all listeners. This project brings enrichment to both sides, musicians and audience as a result.

Bridges shows that such cultural diversity has great creative potential while connecting people through music at the same time. Not only does it enable us to learn more about ourselves and our cultural heritage as well as that of other ethnic groups, it also means understanding without speaking the same language.

Bridges sets an example of how to materialize and live out integration. It has been a successful initiative, which proves that if you are prepared to meet each other with an open heart and an open mind and the will to understand and help, you can contribute to society in a positive way.

There are now eight permanent intercultural ensembles within this project. Ranging from classical music with persian or arabic roots, from folksongs to world-music, E#european classics, or jazz and film-music, Bridges offers these ensembles the opportunity of creating their specific sounds.

The Bridges team also provides the financial framework and organizes locations for the musicians to meet, compose and rehearse. After the première of Bridges in April 2016 in the concert hall of Hessischer Rundfunk there have been about a hundred requests for performances throughout the Hessen region of Germany. We play on renowned stages as well as in refugee and other social locations. Apart from fixed concerts by individual ensembles we plan several performances for the big Bridges orchestra, which counts over 70 musicians by now.

We would like to establish a solid and permanent financial basis so that our musicians will be put in a position to develop their talents and potentials without having to worry about the costs. Due to the special situation of many of our collegues are in – regarding their refugee status - we have to support them on a more individual and larger scale than is usually the case for professionals in the music business. So we are concentrating on these individual musicians, whereever and whenever they participate, i.e. in the Bridges-Orchestra or the Bridges-Ensembles. This support, we are sure, will be to the benefit of all of us, whether musician or audience.
They key-idea of our project has grown into something very special, with high musical and social value. Therefore this message and the belief in refugees as enriching and contributing to our society, must be conveyed to as many people as possible.

At a time when many people who have come to seek refugee in our country, still experience prejudice and agressive or even violent actions against them, It is necessary to increase the number of people who are willing to speak up for them, even as many are still silent. Our concerts will reach a great number of listeners who in turn will readily support the acceptance of refugees in our society.

Equal sharing and participation in society and daily life is only possible if you give people the opportunity to lead their lives as responsible citizens who can earn their own living. Instead of pushing refugees into passivity, pitying them, or excluding them, Bridges supports them in these efforts and helps to offer positive perspectives for the future: become a permanent member in an orchestra, or give music lessons or establish further music-related activities which will enable you to finance your living as a musician.

Unlike many different projects under the heading of "refugee aid" Bridges has developped naturally step by step, encouraged by the engagement and will of those involved.
The result: 80 musicians, 100 performances, decoration of honour of the City of Frankfurt (presented in the town hall by its first mayor, Peter Feldmann), as well as a great resonance by audiences and media.

Thanks to your contribution to this Crowdfunding-Campagne we could set an example to many open-minded individuals of how to work together for a positive future for our society. And of how to actively participate instead of refusing to do so or even taking to malicious agitation..

Your contribution will be the solid base for our work:

Our project connects not only 80 Bridges musicians, but also 40 volunteers, some right from the start, others are newcomers to the family.

The main permanent team consists of the project-leader, Johanna-Leonore Dahlhoff, a Bridges musician from day one, the two initiators of the project Julia Kitzinger (Huk) and Isabella Kohls, who are still heavily involved as volunteers orchestra and two (refugee) musicians equaly involved as interpreters and organizers.

Bridges – music connects is an ideologically independent project run by Kirche in Aktion e.V. ,whose employees help with the book-keeping, maintain our website and assist with managing of the project. The project itself is under the patronage of the senior mayor of the City of Frankfurt, Mr. Peter Feldmann and Mr. Omid Nouripour, member of the German Parliament, representing the political party Alliance 90/ the Greens (Bündnis 90/Die Grünen). 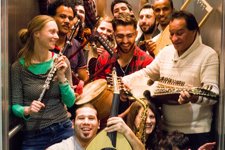