"BRITANNIA in Bamberg - Tage der britischen Musik" (A Celebration of British Music) is the title of a festival with classical music by British composers in the UNESCO world heritage city of Bamberg in spring 2015. Our concerts will offer an impressive selection of the rich melodic range and the fascination of British music. We have already got support for some concerts; however, we need more financial support to realize more projects.

Belcanto fans have their festival in Bad Wildbad, lovers of Mozart’s music in Würzburg, Wagnerians in Bayreuth. But where in Germany can anglophile music lovers enjoy the works of Dowland, Purcell, Sullivan, Elgar or Vaughan Williams? Our offer: In the UNESCO world heritage city of Bamberg. Among others there is already the Centre for British Studies and with the Maria Ward schools an institution which is committed to the educational ideal of the English reformer Mary Ward. Last but not least, leading English composers loved visiting Franconia.
This is the place where the German Sullivan Society plans to host ”A Celebration of British Music“ in spring 2015.

What is so special about the music of British composers?
Britain’s musical culture is one of the most substantial and diversified in Europe. Already in the 16th and 17th century musicians of international standards such as William Byrd (1543-1623) and John Dowland (1563-1626) showed a wide emotional range. Henry Purcell (1659-1695) was praised as the “Orpheus Britannicus“. However, after his death Britain relied too much on attracting famous composers from other countries to the island instead of fostering their own composers. This did not change until in the 1860s when Arthur Sullivan (1842-1900) started his career. He became a composer of international fame. Edward Elgar (1857-1934) is greatly indebted to his musical influences and his support. Sullivan developed the up to then neglected English opera which Ralph Vaughan Williams (1872-1958), Benjamin Britten (1913-1976) and Michael Tippett (1905-1998) built on. Like many of their predecessors, composers such as Peter Maxwell Davies (born in 1934) or James MacMillan (born in 1959) show a political commitment. Our concerts will offer an impressive selection of the rich melodic range and the fascination of British music.

Our aim is to offer ”A Celebration of British Music“ in spring 2015 in the city of Bamberg, where we can show the full range of this music from the 15th to the 21st Century in concerts with soloists, choirs, instrumental ensembles and orchestras.

The German Sullivan Society (Deutsche Sullivan-Gesellschaft e. V.) is a busy but small society that needs your support. If you enjoy the lute songs of John Dowland, the music of Henry Purcell and Arthur Sullivan, the orchestral works of Edward Elgar or Vaughan Williams and the songs of Benjamin Britten, then you should support this project!
Depending on our budget and the artists’ schedules, the events will take place over three weekends in spring 2015. The beginning has already been arranged: On 12 March 2015 there will be a panel discussion on British music with Sir Roger Norrington – the honorary president of the German Sullivan Society – and on 14 March, Sir Roger is conducting a symphony concert with the Bamberg Symphony Orchestra (Bamberger Symphoniker) with works by Tippett, Britten and Vaughan Williams. We are planning to supplement this with additional attractive activites on the programme such as public talks and concerts.

In addition, there are some great Thank You-presents
when you support us, the Germany Sullivan Society, as a charity organisation, can give you a receipt for donations over 200 Euros.

You decide what is ”successful“!

The quality will be better when you work together with professional artists. Here the fee can be between 500 and several thousand Euros.
The more generous you support “A Celebration of British Music“ in Bamberg, the better the programme will become!
Here is a selection of possible concert projects:

The German Sullivan Society with its Chairman

Idealistic and practical support from Sir Roger Norrington, the honorary president of the German Sullivan Society, who has agreed to join the panel discussion and who is conducting a concert. 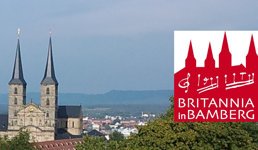