Crowdfunding finished
Premiere recordings of music from the A.E. Fischer, Bremen collection for horn (1896). The printing plates were lost in WWII. This music should not disappear once again! The recordings have been made, but now with the Corona crisis, the funds for the mastering, booklet design and pressing of the CDs is missing. This music is food for the soul.

A resurrection of historical music from A.I. Fischer Editions, Bremen, that was lost in World War II and is now again in danger of disappearing due to the Corona crisis. This music allows the listener to hear music of unknown composers and to be transported into Bremen's musical salons at the turn of the century. Played on original instruments, including a Viennese Uhlmann horn with a second engraving of A.I. Fischer, Bremen, that was lovingly restored.

The recording is a synthesis of a lifetime of work; historical performance practice and style, research, use of the body and breath according to the F.M. Alexander-technique to be available for generations to come. For musicians, music lovers, horn afinados, and those who have a heart for Bremen and its history.

As free-lance musician, I have lost all my work because of the Corona crisis. After 10 years preparation and financial investment, I don't want this project to die. The music contains historically significant works for valve as well as natural horn, played on original instruments of the time creating a historical document of unknown romantic German repertoire for horn.

Mastering, editing of recorded material, CD pressing, text and graphic for the booklet. Post for the rewards. 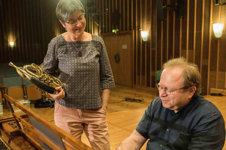