DECKNAME JENNY ("ALIAS JENNY") is a film project initiated by the self-organized film school filmArche. Together with committed and authentic actors, activists and many other, we want to tell a story about radical social resistance – with elements of a political thriller, but close to reality. To be able to make this important film we need quite an amount of money. There's technical equipment, catering, gas and other stuff we have to buy. This is why we need YOUR support!

Large corporations, that are putting people’s health and lives at risk, the economical exploitation of countries with an unstable economy, the acceptance of wars just to conquer new sources of fossil raw materials – In the light of an unfair balance of power in the world our protagonist Jenny and her militant comrades are forming a group of militants. Enough is enough – it’s time to take action!

But not always will there be a clear distinction between friend and foe and also big brother is watching you. Every single character has it’s own personal history that drives his or her motivation so in the end events are overturning, when there is pressure from within and outside the group. In the end even Jennys father has to take action again and face past chapters of his life.

Confronting their fears, hopes and dreams are leading the involved characters to decisions that could drastically change their own future and that of many others...

Our goal is to make a political movie, which raises questions and brings people into a state of consideration. Consideration about the social and political status quo. About independent action and the possibility to offer resistance against the current prevailing conditions and their perpetrators.

What happens to people who decide to take Action in a militant way to achieve changes which seemingly can't be altered conventionally? How do they react to inner and outer pressure? What is the result of a clash between idealism and reality?

Issues like racism, homophobia and social exclusion truly move us and we want to get a closer look at those who are standing against all this, bravely fighting to solve these issues. We want to invite the audience to get an insight into this kind of resistance or at least to consider which possibilities there are to change things actively to the better.

„Class war is reigning, it's true. But it is my class, the class of the rich, who is leading the war – and we are winning."."
Billionaire Warren Buffet (estimated personal assets:
53,5 Billion US-Dollars, fourth richest man on earth)

"Spit into the arrogant leader's soup. Let's do it together in a group."
Cashier Charlotte Meyer

Thirty people from three generations are looking for supporters to spit the rich and powerful in their soup.

Everybody who's interested in the mix of genres between political thriller and drama and wants to see left-wing activism discussed from a perspective within the scene, is totally right here!

Since film fundings are mostly looking for well-established filmmakers and are only interested in producing commercial material that will garanty a hit at the box office we need your support as an alternative authority!
Together with your help we'll be able to add something to German cinema to make it diverse and we could finally shoot a story that we believe has to be told!

The money will be used completly for the shoot of the movie. Because each of us is working on this movie out of idealism and passion for this film, nevertheless, more than thirty people, need transport, good food and a roof over their heads when filming is taking place outside Berlin.
Thankfully, the FilmArche is providing us with technical devices which are already saving us a lot of money.
Nevertheless we have to cover for the following costs in order to present you an appropiate outcome that we can proudly present in the end:

With the total sum of 16500 EUR we will be able to do the movie. Should we overshoot the aim with your help, we'll do the following things to make the whole experience bigger:
- Acquisition on Music rights from Bertold Brecht for the german and english-speaking cinema:
2350 EUR!
- Additional props for the Apartment of Jenny and her father:
1000 EUR
-Acquisition of rights from documentaries about the fights of refugees

Our team grows day by day and everybody participates actively in his very own way with ideas and commitment. Active and former students of the filmArche are part of the team as well as actors, actresses and musicians who variously found the way to our project, as well as other helpers who just like the topic and the idea behind it.
A short selection of those who burn for this adventure:

Jane Georget-Leonhardt
First assistant director
Studied editing and film sciences in Cannes und Paris before she moved to Berlin. She works as dditor and 1. AD on film and tv productions. She directs Shorts films and music videos. In 2013 she joined the self-organised films chool filmArche where she met Samira and Chris.

Chris Taschka
director of photography
After various journeys through different jobs he moved to Berlin seeking a new focus in life. Always being a film enthusiast he started his studies at the filmArche, where he still attends class tries to enhance his skills living his passion for film and moving pictures.

Sarah Graf
actress. Playing Jenny
Classic ballett with the age of four, qualification as a sailing teacher during school and doing actor's Training as a twen. Since then you can see her on stage or in front of a camera, lastly seen in the winning film at the Boddinale "Murmel", which has been written by Samira .

Holger Doellmann
actor, dubber, Yoga teacher. Playing the father
Born in Berlin he travelled into different parts of the country to train and work as an actor. Can be seen in various TV- and film productions and finds his spiritual focus in practising Yoga passionately.

Ulf Schmitt
actor, dubber. Playing Felix
Studied acting at the HFF Potsdam, before this he also studied journalism, law and other things in other places to be able to say one day: "Now, I quite studied...with sustained effort." He bestirs himself in front of the mic to find the right german tone for lots of international collegues. He also puts himself in front of a camera and shows his face - when he's not in his Borussia Dortmund-Pub. There he doesn't like cameras.

Susanna Csik
editor and Social Media Marketing expert
After her studies in Biology she turned her Career to the media and moving Images in particular. These days she's a freelancer in Social Media Marketing with a focus on video Content. Studies at the filmArche editing and at Deutsches Journalistenkolleg, her interest mainly circles around green issues like sustainability, environment protection as well as health and nutrition.

Guts Pie Earshot
DancePunk vs. DubTech - Hardcore vs. Punk'n'Bass - since 1993
1000 concerts and about 800.000 km through Europe. Political dedication with hundreds of solidarity concerts to support antifascist work, preservation of alternative living and life schemes, refugee work...Guts Pie Earshot, impress with a unique mixture of techno, breakbeat, punk, jazz and world music. They are responsible for the Soundtrack of "Deckname Jenny" and perform actively in parts of our movie.

No.Me & Aino
Emolektra-Band
The Young duo from Berlin also contributes to a song featuring Guts Pie Earshot and can be seen in a scene of the movie! 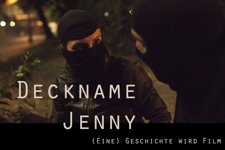