DOMUS DOMINI by designer Heinz-Georg Thiemann aimed at experienced players. It is suitable for 2-6 players, ages 14 +. The game length depends on the number of players. The time you need for each player is about 25 minutes. For Franjos it is an unusual game because the target group of experienced players has not been served in the past.

When Petrus Venerabilis in 1122 starts his job as Abbott of Cluny he finds a difficult economic situation. This is why he asks the monasteries belonging to Cluny to deliver food.
Each player is an abbot who leads such a monastery.
Each year (i.e., every round], players produce a yield and then deliver it to Cluny. Petrus Venerabilis uses the revenue from the yields to make live easier for the monks.. The player who delivers the highest yield in a round gains the most Glory points (victory points). However, he will get the least support (thalers) for further investments.
Whoever delivers the lowest yield in a round receives the fewest Glory points but the most thalers for further investments.
Consequently, players need to decide in each round whether they want to earn more thalers in order to invest in the development of their monastery, or to obtain more Glory points in order to be the winner in the end.
But each player pursues his own plans, and so, every round brings a scramble for the best ranking on the street to Cluny, which might bring unpleasant surprises to some players.

Domus Domini is a game for 2 to 6 players, 14 years and up. The playing time depends on the number of players; on average, about 25 minutes per player.

Course of the Game
Play proceeds in rounds (years), and each round consists of individual phases.
In the first round, the player with the highest abbot begins each individual phase. The other players follow clockwise. After one round has been completed, the next player in clockwise order becomes the starting player.
Each round consists of 8 phases.
In phase 1, one card from the Production card pile is turned over and ste starting player may change;
the cards "Alcoholic", "Heardsman" and "Vegetable cart" are allocated;
interest are paid.
In phase 2, you employ a cellerar nad buy vegetables.
In phase 3 you invest in your monastery, buy dogs, build a chapel and the player calculates how much yield at present he is going to deliver to the street to Cluny
In phase 4, the Alcoholic card and the Worker tokens can be used and thus change the previous ranking on the street.
In phase 5, you can use Vegetable tokens in order to get another chance to influence the ranking on the street.
In phase 6, the beggars are fed.
In phase 7, the scoring for the round takes place. Now, players get Glory points and thalers.

The target group for DOMUS DOMINI are experienced players. Although the rules are simple, for franjos games there are relatively many rules. The result is a more complex game. Also, the running time of 2 hours with 6 players is unusually long for franjos games.
Since I have no experience with the market for gamers games I want to keep the financial risk low. The crowdfunding with startnext.de is therefore a good opportunity to find out whether the players are interested in Domus Domini, so that a production is possible.

DOMUS DOMINI is a game with a lot of interaction. Unlike many other euro-games where each player optimizes more or less to himself, in some phases much interaction is possible in DOMUS DOMINI.

The first attempt to crowdfund DOMUS DOMINI is two years ago.
In the past half-year we have worked a lot on the game again. We changed the rules several times during this time. Finally, we have played / let play two prototypes in different groups. In the last weeks only minor changes have been made. The game is now mature and ready to go into production.

For the release I need your support.

The many times I played DOMUS DOMINI have shown that the game is very good. But the barrier to entry is to high for inexperienced players so that DOMUS DOMINI does not fit to the other franjos games.

The money of this crowd-funding is needed to cover the fix costs for the artwork, stamping tool and the tool to produce the players figures. The production of all game components and the finishing will be done in Germany. This ensures that the finished game will have the high franjos quality buyers are used to by franjos.

Franz-Josef Herbst, Publisher
Since 1987 I am the owner of franjos games company. Since that time, several family games have been released. These include for example CAN´T STOP, BILLABONG, BLACK BOX or the last one KIPP X.
Here is the complete list of previously published games by franjos:
http://www.franjos.de/spieled.htm

Heinz-Georg Thiemann, Designer
In 2008 PLANET STEAM was his first published game. It got a lot of attention by the generous production. Gamers rated it quite high (BGG average rating = 7.47). A new edition is coming this year.
DOMUS DOMINI is simpler. But Heinz-Georg´s slope to more complex games still can not be hidden.
Full-time, Heinz-Georg is the owner of a great game store at Essen town.

Franz Vohwinkel, Artist
Franz is certainly one of the most famous artists in the games area with over 300 designed games. He has a broad range of skills. This is reflected in different configurations so as to PUERTO RICO, GLASTONBURY, FINCA, HELVETIA, TARGI or CIRCUS FLOHCATI.
His experience will ensure that DOMUS DOMINI will have a great artwork and that this artwork will support players having a lot of fun with the game.

Gameplay: Domus Domini is a strategy and resource management game and therefore has enough depth concerning its strategic and tactical choices, while at the same time it manages to convey its special theme in a great way.

The player´s Monastery board will be expanded. This allows to include the "6 repository cards: Work in the Fields / Moneylender". 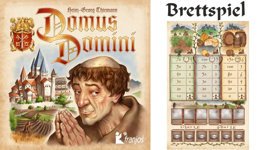