ATreeHouse is not just a house - it is a concept. This concept allows every human being to build an inexpensive natural retreat by themselves. Natural raw materials and regenerating resources are built into a valuable work of art. Things that you love, find and collect will live on in this environment. We dream that by 2030, 10,000 homes will emerge for future generations. We hope to give you all of this, the only thing that will be lost is: “the norm”.

Building houses has recently become a fight versus nature. When building a house you’d usually saw trees and glue them back together to make them subject to “a norm”. You would do this to gain a virtual rigidity that a raw tree would have had all by its own. With the combination of ancient knowledge and modern technology, ATreeHouse wants to create something totally new. AtreeHouse that is attractive, inspirational, exciting and fascinating. We can give you all this, the price to pay is one this that will be lost: “the norm”.

ATreeHouse is on the one hand targeted at many representatives of the low-impact - movement who often face technical difficulties when building such lovely houses. We have rediscovered and developed the necessary solutions, to make this form of building available to the public. We will show in workshops and publications, how you can build your personal retreat at a cost of less than 500 Euros per square meter. We will never be your landlords or principals, but merely researchers and advisors in these matters. We will also train other consultants to spread the idea beyond our continent. We will give our patents freely for personal use and only professional and commercial use will be charged. On the other hand, the project is aimed at holidaymakers who dare a little adventure, want to get to know new people or simply want to escape the daily grind. The ATreeHouse is also suitable to hold workshops and offers trainers the opportunity to hold seminars in a unique atmosphere.

To reach our goal we need prove the feasibility, we will create with your help the first ATreeHouse. We could also imagine to make a crowdfunding for families in need each year. We´ll appreciate your support and your Feedback at www.facebook.com/EinBaumHaus

Our team has been working for two years without pay for this global dream. Now we invite you to contribute your part. Finally, yes you get something for your participation: in addition to the goodies you can acquire the techniques of building your own ATreeHouse through workshops that will start to take place on weekends during the construction phase of the project - beginning 9th of Mai 2015.
And the best thing is that you can be one of the first to move into the house yourself- at least for a few days. You can come and visit as part of a motley fan-group or with your best friends, with Family and kids. You will be allowed to perpetuate yourself in the living guestbook. At reward level random night the allocation of nights will be strictly at random as well as the dates. Of course we will slightly favor full week bookers, as we are aware of your children’s holidays. Additionally all weekly-bookers will take part in a lottery to win the weeks for Christmas and the New Year.

All e-mail addresses will be published in an online calendar to give an opportunity to meet your fellow adventurer beforehand and if possible for changing dates between yourselves. (20% Austrian VAT and tourism tax are included in all rewards)

First, we just have to pay some bills, so that the lights in our planning office don’t get shut down. But then, we will cut loose and get fully motivated started on the construction of the first prototype: Lumbering, woodworking, submission and construction planning according to Austrian federal law, material sourcing, taxes, fees, all this is very similar to building a conventional house. We then try to maintain a tight schedule to finish the prototype by end of June 2015. If we are surpass our founding goal, we will be able to keep the house for you, us and everyone (and as one of the first supporters we will never forget you), otherwise we have to cover our fees on the sale to a hotel owner.

The interior will strongly depend on the feedback we’ll receive from our supporters. It is possible that you would like to tell fantastic stories besides a bonfire in a house without electricity. However you would probably not abstain from your social media and would need an emergency plug to charge your phone. Probably you’ll come with friends, you will be telling crazy stories sitting in a wood-fired Hot-Tub with a cold beer coming directly from a highly efficient sponsored fridge. The next day you will be crossing the dirt roads trying out an electric bike.

The driving force of this project is the restlessness of the visionary architect Wolfgang Lackner.

First convinced by his enthusiasm were designer Diana Willenig and lumberjack and carpenter Franz Seebacher. The economist David Dietrich began voluntarily to organize the virtual finances and submitted grant applications, but only after he had learned that the builder Norbert Huber and the straw bale building specialist Virko Kade are also part of the team.

Prof. DI Eilbracht and DI Steiner of the FH Spittal are very interested in the remarkable statics of the double lever bar work, which will be drawn and measured by future Bachelor Sebastian Gigli.

A tourist approach to whole ATreeHouse holiday villages was created by Hotel Director Mario Sonnleitner in Kitzbühel, the national award winner Hannes Treichl make use of his contacts and his blog 'Anders Denken' for one or another headline. The man to whom we owe the current media reports, together with the corporate grassroots expert Maximilian Eberl, is Peter Suwandschieff. Also, Dr. Beer has to wait with his expenses, until the patent applications, can be refunded.

ATreeHouse thanks all these people and
last but not least:
--- Enter Your Name Here --- for the interest and for the enthusiasm to tell all your friends and for the courage to be one of he first to believe in an idea, namely:
To create new standards of our world as we dream it. 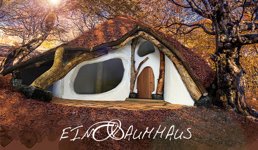