Crowdfunding finished
We are all aware of the ongoing ecological desaster, but little is said about solutions.Very soon, we will need to feed nine billion people on this planet. Monocultures and conventional agriculture are destroying ecosystems, defertilising the Earth and increasing climate change. We need to find alternatives for food production and change the system! Now. This documentary will show one positive possibility.

This is the money I would need, if I want to continue with this project at all. It is invested in my payment and travel expenses.

For almost 2 years I have been accompanying a PhD student from the Leuphana University Lueneburg in Germany during a big-scale experiment. She shows how food forests could be an alternative in the current food system. And lots of things are happening in the last year.

In January 2018 the idea and plan was born that I would accompany Stefanie during the whole three years of her PhD. In spring/summer 2018 we visited food forests all over Europe on an astonishing roadtrip. That was very inspiring. For me as a solo filmmaker and for both of us, as we learned more and more about food forests, the different concepts and the people behind them.

Since autumn 2018 the whole thing has developed into a real story: Together with a local group of people, Stefanie is initiating a food forest in two locations (Lueneburg, Germany and Phoenix, Arizona in the USA). Let me put it this way: it’s everything but boring! I don't want to reveal much more, since you should have a reason to watch the final film. ;) Since then I have been following Stefanie around the world. And with your generosity I will be able to continue for the final year of the project.

The goal is a full length documentary for everybody who thinks that we need changes and solutions in our current food system.

I think the movie should go out into the world. You too?

The money is completely invested in the production of the documentary. This includes the payment of my work, the payment of an editor, travel expenses to the US and in Europe, editing suite rent and post production. This documentary will in total cost about 60.000 Euro (~US$ 66,000), which is still low budget for a project of this kind. Up to now I have been working on this project with private means, part-time and from my own strength. But it is exhausted now. Without your support I cannot continue. In the meantime the project goes on: the second trip to the US is on the agenda right now.

I am an independent filmmaker and this is my first solo project of this kind. Mainly I work as a video journalist and reporter for German public tv stations. So far I have been working alone on this documentary. But that is going to change soon. An editor will support me from now on and I am currently looking for a producer. 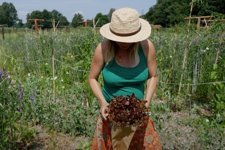