'Freizeit dan sejenis' is an intercultural art project with artistic interventions in Kampung Baru Kubur Koja, a slum in Jakarta.

In December 2016 we intend working together with residents of the district on the concept of leisure activities and to jointly develop projects during a three-week work process. For us it is important to understand that the slum should not be perceived as simply exotic, picturesque scenery or as the recipient of foreign development aid, but rather as a living space for everyday life that has grown in the context of economic and social developments and as a place with specific challenges and opportunities. It calls for life skills, creativity and respect.
We find it important that the art project takes place within the district and will either result in a material inventory or leave immaterial new ideas with an accompanying form of tradition.
We will work together with the residents, who will be involved in the preliminary research towards concept development and at all stages of realisation. Their complex life circumstances are the starting point for the project. The resulting work will have a sustainable character. The key to a successful dialogue with the local people is the cooperation with the artist Jhoni Karlah from TrotoArt, who grew up in Kampung Baru Kubur Koja and still lives and works there.

There is a lack of infrastructure for leisure activities in the district. We would like to tackle this urban problem and to deal with it through artistic processes. It is about sharing time, getting to know each other, finding needs and becoming the impetus for artistic interventions. This must be done openly and in partnership. Just as the inhabitants, we are experts and learners at the same time. Culturally and in consequence of our different environments, these different approaches clash. However, this is productive: fun and humour become a positive and creative motor.

Why should European artists and a European cultural manager travel to a developing country and realise art projects there? And why Indonesia?

It is important to see cooperation and development as more than just a one-way street. We Europeans are used to an (infra-) structure that always works: disturbances such as power failures or the non-availability of certain products leave us helpless. On the other hand, the absence of such structures in developing and newly industrialised countries produces a vacuum in which imagination and creativity are required: necessity is so often the mother of invention. Cultural differences are also important: while Europeans are generally accustomed to long preparatory and planning phases, Indonesians are often reluctant to set long-term, fixed goals and prefer to improvise. In other words – for us Europeans it will be a challenge to find a spontaneous way to deal with the local conditions. The inhabitants of the slum will surely be amused by our awkwardness in dealing with these uncertainties, but will show us their unconventional solutions. In this way we will learn from them.
And if a minimum qualitative appreciation of the district through both the tangible and intangible legacy of art works, artistic projects and new recreational facilities may be the positive effect: so much better!

The overall project will be documented via an Internet blog (languages: German, Indonesian, English):

Over 20 per cent of people in Jakarta live in slums - usually with several generations in a confined space, sometimes without electricity or running water. Entire quarters are regularly destroyed by rapidly spreading fires and inhabitants struggle with flooding due to the proximity to the sea. Despite all these difficulties, however, it is important not to forget what the slums mean for the inhabitants: the cohesion of the people is tight and the social character is particularly significant. The joy of life and the optimism of the people is particularly impressive. We will not be able to change the fundamental problems of the slums, nor would we presume to set ourselves this goal. What we do hope is to make a small contribution by creating artistic possibilities for recreational activities together with the residents.

The total revenues will be used exclusively for the production of the projects, such as material or other costs. Travel expenses and accommodation are already financed and organised. Since this art project is a personal concern for all participants, we will not take any fees for ourselves.

We have set a goal of €500 for this Crowdfunding campaign. Still, each additional Euro will be invested in additional materials! We are looking forward to it!

Chris Dörken (cultural manager, Germany)
For 13 years I have worked as a cultural manager and have planned and executed art projects and events for numerous projects, festivals and companies. I first visited Kampung Baru Kubur Koja and met Jhoni Karlah, his wife and family and many neighbours and friends in December 2014. The hospitality and openness towards me as well as their commitment inspired me greatly, and led to the idea for this art project.

Markus Lohmann (artist, Germany)
I deal with and in the usage of craftsmanship, I deconstruct the homogenously appearing image of everyday life and expose its meaningful patterns. I am interested in the social, economic and political structures of public space. As a co-founder of KUNSTRPUBLIK I have worked as a curator, artist, researcher and activist since 2006. Between 2003 and 2015 we created numerous works in public space in Hamburg. Since 2009 I have worked as a stage and costume designer for the transnational art project HAJUSOM e.V.

Chris Meighan (artist, Netherlands)
I work with performance, text, video and 'technical research as an artistic medium'. My work examines the relationship between the constructed environment (physical, technological, social) and the individual human being, and in particular the way that we in the developed world have become detached from the reality of making and of thinking through physical activity. My extensive travels in the former Soviet Union and other areas of the developing world have fuelled a fascination with the solutions that often emerge in the absence of an effective and omnipresent government and market, and how these highlight the aforementioned 'poverty of plenty' in the West, i.e. detachment from our environment and from the need to be inventive.

David Rauer (artist, Germany)
My name is David Rauer (*1986). I mainly work as a sculptor and professional ceramist. I am based in the German town of Osnabrück, where have I set up a small studio. Besides working with clay my interest lies in space in general. My works often turn out to become a kind of an installation and they are sometimes developed in site-specific ways.

Irwan Ahmett & Tita Salina (artist duo, Indonesia)
We established the Ahmett Salina design studio in 1994. Since 2010 we have initiated art projects focused on urban issues, especially public space, and have examined social and political issues as creative resources. At present we are focusing on more complex issues dealing with injustice, political turmoil, environment, energy and marginalised people. Universal human values are often generated in our performances.

TrotoArt
The artists and initiators of TrotoArt, who live in this slum and who have already realised many social projects to improve living conditions, have invited the artists to stay and work in the area. This art group, which is a respected player in the area, will provide a link with the locality. They have a great interest in exchanging experiences related to artistic approaches and social processes with foreign artists and in talking and acting together.

This art project is sponsored by
Institut für Auslandsbeziehungen (ifa) 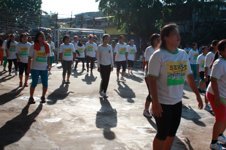