Crowdfunding finished
Inofficial Fridays For Future merch is all over the web! But who actually makes money with it and what about the conditions under which it is produced? Infos on this? Nothing at all! With our campaign we want to show that things can be done differently. Our shirts are sewed in a worker-owned factory and are thus a perfect match with the likewise self-organised Fridays For Future movement. And what’s more, 3€ per shirt are donated to the movement. That’s how protest merch is done!

The first funding goal means a support for the campaign in form of approximately 300 shirt orders and 900€ for Fridays For Future.

The intransparent business with protest merchandise
Whatever topic you are looking for on the web, there is always some catchy slogan available, put on t-shirts, bags, pullovers, caps, you name it. But who actually makes money with these items and what about the conditions under which they are produced? Infos on this? Nothing at all! Sadly, in most cases one has to assume that the message on the shirt is in stark contradiction to the production conditions and used materials.

Online capitalism ≠ Fridays For Future: No match at all!
Big online platforms whose business model are based solely on profit maximization are now even grabbing after the eco-social Fridays For Future movement to cash in?! WTF! This has left us so outraged that we decided to start a solidarity campaign.*

Protest merch yes but please in fair and organic
Together with you and our production partners we want to prove that protest merch can be done in a way that is just and works for everyone.** Firstly, we think that shirts sewed in a worker-owned factory are a way better match with the likewise self-organised Fridays For Future movement. And secondly, if you create and sell merch with a reference to a concrete protest movement, that movement should be getting something out of it, too, right? That’s why 3€ (i.e. 60 percent of the net surplus of each t-shirt) are donated to Fridays For Future Germany.

LAST BUT NOT LEAST: For the shirts ordered during the campaign we will only use organic fabrics that we already have in stock in order to avoid usage of any additional resources. We use screen-printing technology with water-based and eco-friendly colours. Delivery will be climate neutral.

*The campaign idea was triggered by the bento article "Wie Amazon an Fridays for Future verdient".
**Detailed info on the production chain can be found here.

By supporting our campaign you can show your solidarity in an uncomplicated manner, despite the stressful life you may have, and what’s best: you can do it in a twofold way! On the one hand, with yourself and the many other humans who are in the movement and who won’t stop until truly responsible action is finally taken at the political and economical levels; on the other hand, with humans who in the middle of the capitalist system chose to establish a co-operatively owned and managed sewing factory in Croatia where our campaign shirts are made with dignity. If there’s more of both, dedicated and determined people on the streets and in the workplaces, then the world and our climate will be better!

What exactly is the cost structure of each t-shirt?

Numbers include 19 % VAT as by the law in Germany.

What exactly happens with the surplus per t-shirt?
The net surplus per t-shirt after taxes is 5€ and 3€ (i.e. 60 percent) go directly to the donation account of Fridays For Future Germany so that the movement can continue to grow and work independently and self-organised. If the campaign is particularly successful, a part of the money might be even used for activities in other countries. But it’s up to the activists to decide so.

Transparency
After the campaign we will publish all records of the donation so that everything is transparent and traceable.

**Costs include climate neutral delivery of 1-2 t-shirts with DHL GoGreen in Germany.

**Platform fees include a voluntary fee for using the startnext platform and the obligatory transaction costs for the external providers of financial services.

SOLI-SHIRTS FOR FRIDAYS FOR FUTURE! is an initiative by dna merch, the Berlin based provider of fair and co-operatively sewed t-shirts, who uses parts of its incomings in support of grassroots workers’ struggles in the global garment industry.

The idea for the campaign was triggered by the bento article "Wie Amazon an Fridays for Future verdient". However, we have been working on the issue of fair protest merch since the establishment of dna merch. With solidarity t-shirts that dedicated people use to raise funds for good causes, it’s often hard to find info on how and where it’s produced. As a consequence, the good cause that is pursued with the sales of the t-shirts often stands in stark contradiction to production conditions and used materials. 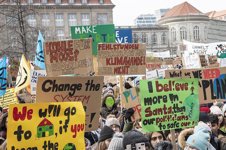