Crowdfunding since 2010
Crowdfunding finished
Clara lives underground with her mother, who is wanted by the police. When they are blackmailed into committing robberies, Clara's rebellion is the only way out. As a film collective, we shoot a coming-of-age action thriller with feminist and aestetic aspirations. Our goal is to participate in several film festivals in 2022. Thanks to our crowdfunding supporters, we were able to shoot two thirds of the film already. With your help we will finally finish the film!

CLARA (17) has been living in hiding for years. Her mother DAGMAR is a wanted former member of the left-wing terror group RAF, who earns a living by robbing stores and security vans. After one of Dagmars robberies goes wrong, they have to leave their home. SAMIRA, a longtime family friend and foster mother to Clara, provides them with a place to stay.

Not long after their arrival, the three women are faced with danger, as Dagmar's past catches up with her. A corrupt cop, who has known Dagmar for ages, has evidence he uses to blackmail them. He forces her to commit further robberies, which become more and more difficult for Dagmar due to her age. Soon she needs the help of Clara and Samira. As time passes, Clara takes on more and more responsibility for the family and starts to take advantage of the freedom that goes along with it. She starts exploring the city and her own identity. While visiting a nightclub, she meets ALEYNA for the first time. Soon Clara realizes that one of the stores she robbed with her mother was owned by Aleyna’s parents, who are now on the brink of financial ruin. To overcome the seemingly hopeless circumstances Clara and Aleyna band together.
A coming-of-age story of love and emancipation unfolds, told as an action thriller.

Who is our audience?
Our coming-of-age thriller is about an isolated child’s development into being a strong, independent woman.
The film addresses…
…teenagers, dealing with the difficulties of becoming adults.
…young adults, gaining their independence.
…youthful people of all ages,
......women* who do not want to or can no longer identify with the role models seen in most commercial productions,
…anyone interested in controversial societal issues: from the almost forgotten RAF, over the turbulent Berlin club scene to problems migrants face living in Germany.
Our innovative approach in producing this film also creates new perspectives for (aspiring) filmmakers.

Our motivation
Our goal is to make a feature film with a unique story and production style. We want to show that equality and representation of women in filmmaking must not be seen as obstacles, but as opportunities for the film industry.
The project gives us the opportunity to gain experience in filmmaking, to gain connections for the future and to try new ideas in collaborative working. We want to enable young people, and especially women*, to take root in the film industry. We want to address issues that usually don’t get much attention, but are important to our generation.
As a free collective, we produce independently of those institutions that maintain and promote unjust structures in the German film industry. We want to be a role model and inspiration for other young creatives and filmmakers who do not have access to funding for young talent due to the existing conditions.

What are our plans for this movie?
As soon as it’s finished – hopefully by the end of 2021 – we will be submitting our film to national and international film festivals. There will also be a number of small, informal screenings for friends and family in cinemas and at universities. Everyone involved in the films’ making will receive their own copy for private viewing. Our ultimate dream would be to be able to watch the movie in the cinema one day.

GENERATION TOCHTER is an ambitious project. More than 80 young people are working collectively to make a feature-length film, most of us while studying or working. We want to create a space where everyone who is interested can participate in the making of a feature film. Everyone works unpaid and on a voluntary basis. We have neither big financial backers nor the infrastructure of a film studio. However, we hope to make a film that breaks established and old-fashioned ideas about how a film should be.
In order to counterbalance current structures in the film industry, we have a noticeable female presence in leadership positions within the collective. 75 percent of the members of GENERATION TOCHTER are female. Of the five lead roles, only one is cast as a male. We show a love story between two young women without making a big deal about the same-sex nature of the relationship in the film. Therefore, we hope to contribute to normalizing alternatives to the dominant heteronormative relationship types in German movies.
In doing so, it is also important for us to listen to you. You are the audience, for you and those who want it, we want to create a film that tries out new things and doesn't stick to old structures. If you can identify with our ideals and are interested in the realization of the project, you can actively participate by making a donation. Thank you very much!

What will happen with the money, if crowdfunding is successful?
Filmmaking is expensive. Unfortunately, as young, independent filmmakers we don’t have the financial resources to realize this project on our own. We try to save money wherever possible, without diminishing the quality of the film. All members of the collective – even the actors and actresses – work without compensation. Unfortunately, materials, transportation, equipment and catering are not for free. Now it's time for the final phase of filming. Only few scenes are left to be shooted, such as the club scene where Clara and Aleyna meet for the first time and the scenes with Aleyna's family. In addition, the final stage of production involves post-production costs and fees for submitting the film to festivals.
This is a rough estimate of the split of costs from your Crowdfunding contribution:

The remaining funds will be used for marketing and hygiene measures.

the collective
Since having the idea for this project a collective of talented and ambitious young people, who want to contribute to making this movie, has formed. We are students from several universities, but also freelance filmmakers, or simply people interested in the project. Most of us are based in Berlin, others are from different cities in Germany and other countries. We have been working together on the realization of the film since January 2020 and have now grown to more than 80 people. We work in groups with clearly defined responsibilities within the production process. Each of us can step in and out of responsibilities, therefore, we are ensuring a collegial, creative and free working environment. This enables us to quickly find the right solutions that lead to effective problem solving. Diversity is key when building the teams, as we look to fill leadership positions, that are usually male dominated, with women*. With about 75% women*, the collective is majorly female.

Current state of production
Since our first production meeting in January 2020, GENERATION TOCHTER has accomplished quite a lot: The successful script development, two crowdfunding campaigns as well as the realization of two extensive shooting blocks including stunts, car scenes and shootings. All this is made possible by our countless supporters, first and foremost you, but also NochMall, Kamera Ludwig, the city of Demmin, Bloc-Inc and many more. For the last and third shooting block of the film we will go to a club in Berlin and visit Aleyna's family in their home. Until the end of the year we will finish the film.

The reason we were able to get this far is you, and for that we say thank you!
One last time we need your help to finish the film and share the great result with the world.

If you have any questions, you can reach us via: 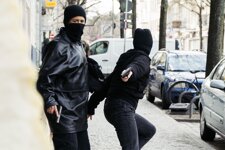