Crowdfunding funding phase
Football shapes our society. Now it's our turn, as a society, to shape football and change it in a sustainable way. We as the people should be able to decide what we consume. Are you against FIFA, against the commercialisation of sport and for a fairer and more respectful world of sport? Then you've come to the right place! In winter 2022, the ASAP Global Cup will be held in Leipzig and on the internet - the first real alternative to the FIFA World Cup.

The goal is to raise 1 million euros. We use 50% of the money for the planning and realisation of the tournament. The other 50% will be donated.

We want to organize an alternative to the FIFA World Cup 2022 that positions itself against the commercialisation and pressure to perform of top-class sport. Parallel to the World Cup in Qatar, 16 teams with at least 15 players will have the opportunity to play for four weeks in Leipzig for the ASAP Global Cup 2022. The games will be played at the same time as the FIFA World Cup to create a real alternative for football fans and consumers.

On the pitch, on the sidelines, in the audience and on the internet, we want to generate a safer space in football that does not (yet) exist in today's stadiums. In addition, the ASAP Global Cup is a tournament without the binary gender division, so it is not a men's or women's tournament. Neither origin, gender, sexual orientation nor religious affiliation are decisive for who participates as a player in the tournament. Our explicit concern is to offer a platform to people beyond the cis-male ideal suggested by professional football.

Via free livestream or on site, the audience is offered an equal tournament atmosphere, which is guaranteed by exciting pre-reports, critical half-time analyses and authentic live commentary , among other things.

Political education is a crucial part of the project. The expressed aim is to expose and discuss the structural problems of FIFA and professional football. In order to implement this, there will be workshops, panel discussions and the like in addition to the matches, where speakers and fans can exchange ideas.

We want to offer an alternative to the FIFA World Cup in Qatar so that consumers can choose which games they support.

In doing so, togetherness is important. You can support:

Exciting pre-match reports, classic half-time analyses and critical interviews after the match are intended to bring the atmosphere of the tournament to the viewers' screens.

You can find more information at www.globalcup.de

We love playing football and all the wonderful things that come with this passion. But we are shocked by the current state of paid men's football. The World Cup in Qatar is the culmination of a questionable development over the last 20 years.
FIFA has lost its moral compass. Despite important commitments in countries of the Global South as well as investments in infrastructures and the hosting of tournaments that unite the whole world, the association has manoeuvred itself into the sidelines through corruption reports of high-ranking officials and the toleration of human rights violations. In addition, the impression has arisen in recent years that the idea of profit is paramount in the federation.

We want to free ourselves from the shock and individual powerlessness and go beyond the boycott to oppose the model of professional football.

You're a football fan and you're fed up too?

You have nothing to do with football, but want to improve the world a little bit?
No matter what the case may be, you are cordially invited to join in!

The realisation of this tournament would not only be an active protest against the latest developments in modern football, but also a positive signal to grassroots and amateur football. And through the donations collected, we can directly create a small impetus together.

Social sustainability, pitch rental or technical costs - in our capitalised society, almost everything can only be provided through monetary means. We want to run the Global Cup without external sponsors or advertising, so we rely on donations.

Our tournament idea is based on a non-profit basis. Depending on how well the crowdfunding goes, we will be able to implement our ideas. Any money that is available beyond that will be donated to NGOs and clubs that work to improve the humanitarian situation in Qatar and grassroots sport in Germany.

The goal is to get € 500,000 for tournament funding and € 500,000 for donations.
The €500,000 is made up as follows:
- 250.000 € are planned for personnel costs; in order to be able to guarantee a fair payment for all participants, so that nobody is exploited
- b]120.000 € are calculated for the technical equipment of the livestream, in order to be able to carry out the livestream in a professional and high-quality way.
- the remaining 130,000 € are earmarked for the realisation of the event, e.g. for pitch rental, jerseys or other equipment.

We are a group of young students and good friends from Leipzig. Together we have joined forces as ASAP (Amateur Sports Against Profit) to combine sports entertainment and political education in the ASAP Global Cup. You want a detailed description of us? You can find out more in our profiles and on our website. You have questions, comments or criticism? Please leave us a message, we are grateful for all hints and comments. 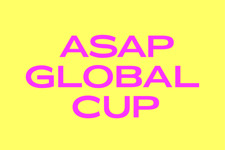 The alternative to the World Cup: The Global Cup
www.startnext.com