We want to make a film about a garden settlement where not only daisies, but also borders grow as if they were weeds. Right through the middle ran the Berlin Wall for over 40 years. The idyllic garden love living together with the death strip. Today, 25 years after the fall of the wall, the barely overcome borders sum up new resentment of what is not defined as private.

Flower beds, garden gnomes and community. Clear structures, strict rules and an inspection view over the fence. It is a rural idyll in the middle of the town and at the same time, an unimaginable place; one without the bylaw, a management board and inspection. The Kleingarten. There are a great number of movies, newspaper articles and books about this german small garden plot culture in all its splendor.

Our hearts beat for a Kleingarten too. A green oasis like many others in the city, but this one with a certain peculiarity. It is located where the middle-class Treptow district meets the lively, trendy Neukölln district. Between 1961 and 1989 the Berlin Wall ran straight through the middle of the area. The once united settlement of small garden plots was divided. A place where they previously interchanged tips for the proper tomato breeding became territory for patrols of border guards.

The roles played in the garden remain unclear to this day. Did only people who could prove a certain loyalty to the system become a garden in the border area of the old Eastern part? Was the neighbor listening when someone talked about desires and dreams none-conforming to the system? Did the western border gardeners really try to get in touch with their East German garden friends? Or did they look the other way, attempting to avoid what was happening beyond the death strip? 25 years after the fall of the wall one might think that these issues have long been resolved. But prejudice, wild rumors and painful experiences still play a role. There are memories, many of them contradictory, about stories happening in the allotments before the reunification.

Now, a new tangible incision has entered the story. A significant part of the settlement was destroyed, victim to the lengthening of the A100 city motorway. There is already a big debate in Berlin about the purpose of this motorway. Regardless of political direction, many owners were forced to leave their gardens. For some months, in the period between the clearing and the demolition of the houses, refugees, the homeless and artists occupied some of the abandoned gardens. A barbed wire fence was ripped. It marks the border between the remaining gardens and the construction area, but also reveals a lot about new social limits and xenophobic stereotypes.

The plan is to develop a 50-minute documentary film as centerpiece supported by a website with text, audio and video content. We also started a Facebook page where we will speak about the production process and discuss with people interested in the project about it.

We search for old and new borders. We understand the allotments as a symbol of dealing with the past, an important topic in Germany. 25 years after the fall of the wall, many people still divide the country in both the East and West. The East German “aversion to work or under-development” and West German “selfish and less social way” are stereotypical prejudices that still exist. Germany’s unity is sometimes felt only when talking about "how full the boat is", "criminal Turks" or "Romanian social parasites". Therefore, we also want to determine how the allotment gardeners deal with strangeness and define their own. What do people really know about the "strangers? How do people form their opinion here? Doesn’t the strangeness already start behind the garden fence?

The film revolves around two main characters: for 19 years Evi Wolter ran a bar in the small garden settlement called "Stadtbär”. It stands in the middle of the path for the construction of the city highway. In 2010 Evi had to leave. She was 71 by then, but her partner convinced her to keep on working. One year later she took over a different bar in the remaining part of the small garden settlement.

She still never crossed to the eastern part of the garden area. She simply does not feel the need to do so. She considers her new pub in the middle of the settlement a retreat. Neukölln, the neighborhood in which she actually lives , became too multicultural for her a long time ago.

Our second main character is Wolfgang . He grew up in the settlement Kreuztal in the former eastern part, and remembers stories happening in the „GardenState in the state“ - as he likes to say . He has much to tell about people injured while trying to cross the border , his brothers on the West side or the view of the death strip from the top of his pear tree .

There are others: a Turkish family, for example, who had to face an isolation which makes the troubles of the wall fade far into the background. Andy, who fled from the old Eastern area just before the fall of the wall and brings with his leather pants and long, gray ponytail some extra fuss in the Western part of the allotment. And Ingo, who, during an interrogation realized that his garden neighbor had been listening to many of his private conversations.

Because we have found people who have spent half of their lives in the allotments and who are able to tell incredible stories about their life between the old and new boundaries. These people are old and getting older, meaning that if we do not shoot the film now, those stories will be lost forever.

To see a movie which is financially independent from production companies and television channels. One which does not need to be adapted to emitter profiles or cut back because of marketing logics. A film where the authors can keep their rights entirely.

We can rely on a dedicated team with professional technology, who will give up a large part of their free time and resources for the project. Peter Mittwoch is a freelance cameraman and will be filming for us in his own style. Maite Bueno, author beside Julia Mittwoch, is editing the film.

However, we need a professional editor and post producer to take the fine touch responsibility over the film, therefore we have estimated a 1000 Euros fee. Another big financial expend is the purchase of video and photo rights, which could also sum about another 1000 Euros. We have calculated around 500 euros for the purchase of hard drives, cables, batteries, adapters etc. and the lending of a second camera for a two days of filming. Another 500 Euros will be purchased as an expense allowance for our characters.

Some of us grew up in Berlin, others might grow old here. We come from Spain and Germany, are journalists, anthropologists, artists and web designers. We look at undiscovered parts of the city to analyze them from the inside and out.
Maite Bueno is a journalist and comes originally from the Basque country. As a foreigner she is able to probe in a more direct and naive way about topics that are often a no-go for Germans.
Julia Mittwoch is an ethnologist who works in the Documentary & Reports Department of the Deutsche Welle. She was raised in the district of Treptow in Berlin and spent, during her childhood, a lot of time in the garden plot of her grandfather. This is an important fact for being able to relate to the film characters. 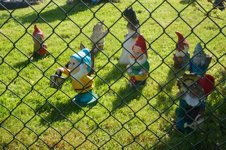