Crowdfunding finished
If you like to go to concerts or be on stage yourself, then 2020 was not a good year. We used our forced break from live performances to work on new songs. Four of them we recorded in August and will release them on an EP called Somewhere Between. As we are confident of the quality of the songs and the sound is a big step forward for us, we want to present the EP in an appropriate format: on good old vinyl.

That's what it costs to press the vinyls. The actual production of the music is paid by us.

After releasing our debut album Empathy last year, we were looking forward to playing more shows this year, which wasn't possible due to Corona. But with that also came a surge of creativity. The new songs fit together stylistically and they show the core sound of Grizzly Bird. That's why we decided to quickly record and release them as an EP called Somewhere Between.

We spent two days in August at the studio The Famous Gold Watch, where Cameron James Laing recorded the three of us live. We left the studio happily and feeling that we have never sounded better.

The costs for this project were comparably small, as we worked quickly. But if we released the music only digitally, we would be stuck with the costs. Unfortunately, CDs are not very popular anymore, but vinyl records have had a revival. Our albums have so far been too long to fit on an LP, but with the Somewhere Between EP we finally have the opportunity to press it for vinyl lovers.

We are confident of the new songs' quality and want to release them as a neat vinyl EP. The songs will also be released digitally, so it's possible to support us without having a record player. The Somewhere Between EP is for fans of handmade music, analogue acoustic sounds and good storytelling.

Why not take a look at the video for the first song of the EP, The Drummer's Trauma?

In times where music is listened to mostly on streaming sites, it's very difficult for musicians to finance a studio recording. On one hand, what Spotify & co pay musicians is an absolute joke. On the other hand, people have gotten used to not paying for music. With Corona, playing concerts as a source of income also isn't possible. We are thankful for the possibility of supporting us through Crowdfunding so we can continue to create music.

If you support this crowdfunding, you will be able to hear the EP and see the forthcoming videos before anyone else. 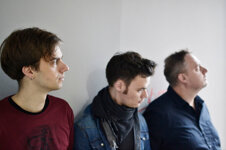