Crowdfunding finished
"Hellebore"- a film about an alien, who is trying to become an earthling. In the perfect new world, where aliens and humans live together with the help of social credit devices, named hellebore, a new alien arrives from a less known planet to become a human. But the perfect systems also have flaws.

Hellebore - A teaser for a science fiction movie about a future, where people have developed a credit based social system, integrated in the device "Hellebore". The device is considered a central part of the integration rules on Earth. Our two main characters, Rick and Tay, are two aliens who couldn't be more different.
They dream of a future as inhabitants of Earth.
The film is meant to be a satirical, metaphorical portrayal of our society, our identity as humans and as foreigners.

The shooting is now finished and we need a support in post-production: sound, VFX, music and grading. Our target audience is young people and people who went to the other countries and went through the integration process.
The point system already exists in our world; in China since 2014 and in the UK since the Brexit. It should appeal to the people who are interested in the topic and also know the system.

The goal of the teaser trailer is to generate and pitch interest in the feature-length version, as well as to develop the script dramaturgically. My idea was to create the visual world first to give the feeling of a possible future world.
Finalizing the trailer would allow me to achieve these goals.
The project should give a new look on identity and "being human" and I also want to encourage other people to stay brave and strong to reach your dreams, especially if they are in a foreign country.

We have assembled a strong post-production team that will finalize the film to a high standard. To achieve the best possible qualitative result, especially with VFX, it always needs a budget. With a successful financing we will continue the post production process and finalize the trailer.

There is a lot of energy, love and a lot of personal experience behind it.
I came to Germany alone when I was only 19 and grew up and integrated here. It was always my dream to become a European. Especially when you come from Belarus, you want to be free, you want to be protected.
I have learned how to become a free person, so to speak. This film means a lot to me.
My goal is to show both sides of integration, both the satirical side and the positive, gentle experience of integration. 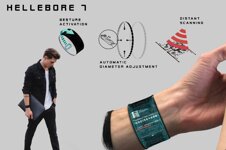