Hi KPFamily, hi supporter, friend, stranger, nice guy, companion, or turn-upper. it's us again: wow, time's running! Two years ago we wrote crowdfunding history together and now we're moving straight forward to our 15th year as a band called KILLERPILZE. ANNIVERSARY TIME! "And now they're doing a film?" you might be asking. We gotta say: "YES!" We need to. There is a story to tell. A view into our inner circle, into the music industry. Unseen footage. Be part & support us! All infos below.

2017 will be a big year for us and our band KILLERPILZE:
15 (!) - year existence. This is something, we cannot really conceive and the reason why we want and need to share something special with you. A story, that is unique in German music industry and music history. We want to make a documentary about it. About us. Yes, exactly: a film. About Killerpilze.
"KILLERPILZE 15 years - IMMER NOCH JUNG" - The Documentary is a contemporary document, that we started - to be honest - back in 2002 when we began to film our life as a touring and recording band. After sighting thousands and thousands of filmed material we want to share this unseen and highly personal material with you. As our gift for you to our 15h "birthday". The complete band history from starting as the youngest rocking school band in Germany back in the days to celebrated teen stars, the story of the end with the major label, fall, foundation of our own record label to the way back to the world's main stages. Unique, honest, unprettified. Narrated by companions, ex-band members, TV presenters, musicians, business people, VIPs, label employees, family members, friends and many more. And of course: Jo, Fabi & Mäx themselves.
A view behind the entitiy of a band "that accomplished something, no band ever in Germany accomplished before" (direct quote of an interview partner in the film. As you can see then.)
A film, that is unique and delivers a story no other band can tell.

What does this mean?
David Schlichter, Mäx' brother and we as a band started working on this documentary during the last months. We produced, wrote, sighted material, fished old footage out of our archive, organized and did interview and travelled all over Germany to make this documentary as comprehensive as possible. BUT some further steps are missing, to finish this film. As you might know we are working independent and without a big film company, and that is why we need YOU to finish this big project (probably the biggest KP-project ever). We need you to finish and release this KILLERPILZE-film. This documentary is for you and we believe, we are creating a special contemporary document. Interesting for every fan, everyone interested in mucis, every musician and everyone who wants to get a real and entertaining view into the music industry and the mechanisms behind it.
But we can only release this film if we accomplish to reach the financial aim we set here on Startnext.

What do we need?
To put it straight: Firstly we need the mentioned money, to produce and manufacture the film. (What for we'll spend the money, we listed below.)
Two and a half years ago we proved together that KPFAMILY is a strong community, that is characterized by team spirit, passion, and the will to support independent music. We broke the record and we'll grateful until eternity for your support. But we think KPFAMILY can move something big again together. This time it's not about an album but about something not less valuable: A film. A documentary.

Of course we want to give you something special for your support again.
We started thinking about, what we could give away besides the supporter-goodies and we created NEW EXCLUSIVE goodies, more exclusive than ever. Similar to the last time these goodies are only available right here, right now, right here on Startnext.
100 % Killerpilze straight from us to you. And you know, that we will do it in style.

Ey, we rocked crowdfunding the last time and we hope that this unique community is back on track right now in 2016! We know we can make something special again. Every single purchase of these exclusive THANK YOUs supports the realization of the "IMMER NOCH JUNG" documentary immediately, we can go on tour and celebrate the 15 year existence of KILLERPILZE. We need these 100 % here on startnext.

If we don’t crack the said 100% , contrary to expectations, there certainly will be no costs for you and the money will be refunded , but you also won’t get any of the items offered and the film can not be released.

Come on, let's do it! Let's go crazy, KPFAMILY!

to cut, manufacture, produce and release this documentary.
For us it is ONLY POSSIBLE with YOU.

Who will be part of this journey?
Primarily we hope that KPFAMILY, who's been supporting us througout the last 15 years and sticks to us all the time, will be part of this campaign. But we also know, that out there are many people, who bought our CDs, were part of the journey back in the days or came to this family during the recent year. This film is for YOU. AND: If you started following Killerpilze not long ago, check out this movie to see how all this craziness started 15 years ago.
Briefly - everybody, who feels attracted to the idea to support a musician/band directly to make it possible to release a big film/documentary, should be part of this campaign.

We wanna ask vice versa: Where else can you make our dream come true to drive a GoKart race against you? Where else can you buy one of Jo's ultra fascinating highly precious and artistically mind blowing paintings? And how else do you think can your dream of a personalized KP song get real? Just here on startnext.
We created very cool and exclusive things (all goodies are listed here on the right side), and we want to share these things only with the cool kids and the spine of our community: YOU.
You want a concert in your living room? No problem!
You want to have life-long guestlist to every KP-Show? No problem!
You wanna purchase our FIRST limited single ever? Here you can have it!
Or do you just want an extraordinary film, an unique story about Killerpilze? Here you can have it!

We proved once, that KPFAMILY and every supporter place importance on good quality and paying for music and good products. In these times, it's more difficult than ever to just start such big projects, to be brave enough to take the risk of doing a project like this and to write history a second time with you guys and supporters! But we want to make it possible AGAIN, because we're sure it IS POSSIBLE again!
We, the KPFamily are bigger than numbers and obstacles! We've been proving this throughout all these years.
With your contribution you will help to get the thing that unites us - the story about the music, about the band - on the direct way , without detours , personally and right away from US to YOU.

Rights clearing: 4.000€
A documentary happens to be a good documentary when it tells the story in all possible ways. This includes extracts from existing TV performances, interviews etc. We have to pay for that extracts to the right holders (so the guys who originally produced it). Same applies to the background music even if we use our own songs. Why? Because the rights of „Invasion der Killerpilze“ and „Mit Pauken und Raketen“ are still under the ownership of Universal. We first need their approval before we can use them for the documentary - unfortunately this will cost us money too. Crazy world huh?

Fees (director, camera, editing): 12.500€
Producing a film needs time. Much time. Starting with research, pre-production, writing concepts, planning the shooting days, leading numerous interviews, get it all together and than maybe reject everything again - it is a sisyphus work until the perfect movie is ready for you. There are people who dedicate themselves to KILLERPILZE - IMMER NOCH JUNG - THE DOCUMENTARY in a way that prevents them from accepting other jobs. But those people need to make a living, too. Your money will float directly to the most important position in here: the director, cinematographer and editor.

Equipment & technics (e.g. location permissions): 2.000€
Although we want to shoot as much as we can with our own cameras there will always be a little amount of costs which we are going to need for some special equipment such as lenses or lights as well as for location permissions. Those „hard costs“ approach in every film production.

Traveling costs cast / team: 1.000€
As you can see in the trailer we are visiting many protagonists all across Germany. Long distances we have to pay fuel and train tickets for.

Postproduction (color grading, sound design, sound mixing, subtitles, title animations): 7.000€
A good film happens to look like a good film because there are many people working on the postproduction behind the scenes after the movie has its final cut. Color grading let us look better (and only THAT you wanna see!), a sound mixer improves the speech discrimination of the talking heads (and only THAT you wanna hear!), for the KPFAMILY WORLDWIDE we do need subtitles (don’t we?!) and there shall be an ordinary DVD menu so we all have that special movie-night-feeling, huh?

General costs (collecting societys, legal advice, pressing costs): 3.000€
Like every film producer we are obliged to pay to collecting societies - in Germany you might have heard of „GEMA“, for example. For further distribution we also will have to find out if the film is R-rated or not. And in the end the final film will have to be printed on a DVD so you can hold it in your hands next year… when we’ve arrived at this point, when you open up the cover of the DVD and insert IMMER NOCH JUNG - THE DOCUMENTARY into your DVD-player… then we’ve done it!!!!!

Taxes (5.000€)
—> Taxes? Yes, exactly: Taxes. We are selling the goodies including (7% or 19%) VAT, so we do have to pay tax on each and every goodie afterwards.
Last time we handled this like: We absolutely didn’t have any idea of taxes and honestly weren’t too concerned about it. We collected startnext-money with you. We collected more than we’d have imagined. We though: Yeah! And then… Tax office came around and we had to pass muuuuuuuch of the money further to them so - in the end - there remained less than we put in as our „goal amount of money“ in the first place.
This time: We don’t do the same mistake twice and handle the „tax issue“ a bit better ;-) Of course taxes will have to be paid only when we reach our goal… which is…

It's us, the band everybody's talking about in this documentary: it's us, KILLERPILZE! (yes, we still exist and we still have this great band name) We're Jo Halbig (27), Fabian Halbig (23) and Maximilian Schlichter (28). We stand here with every single person, who's purchasing an exclusive goodie to realize this great, big and crazy project. We know that we have an incredible fan base, the KPFamily . Also we welcome everyone who appreciates our work, who is enthusiastic about the project and wants to be part of it. Together with you we will manage it!
Aaaaand, we're happy about every single person, who's interested in our story during the last 15 years, the hype, the fall, the craziness, the own record label, the tensions and the highlights: MAJOR LOVE! 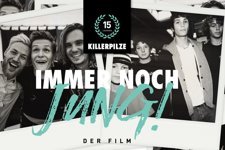