Crowdfunding finished
Kleiderei is the perfect addition to your own wardrobe - in our library for sustainable fashion, members can borrow clothes from a curated selection, swap them as often as they like, borrow them for as long as they like and always get the right outfit. This way, sustainability can move into every wardrobe immediately and easily.

We want to open the Klederei store in Berlin and need start-up funding for it.

We are currently stuck in a fast-fashion madness that harms our environment and many people along the supply chain.
But there are hardly any alternatives.
In the long run, the clothing industry has to change!

At the moment, however, we simply have a huge surplus of textiles that have to be recycled somehow.
On average, an item of clothing is worn four times before it is discarded as old clothing. 40 per cent are even worn less often or never.
➜ Your infinite wardrobe:
With Kleiderei, we want to extend the life of existing clothing to the maximum and offer a simple alternative to fast fashion.

In our stores, members can borrow four items of clothing for a monthly fee of €29 and exchange them as often as they like. The flexible offer makes Kleiderei the perfect addition to your own wardrobe.
You buy less new clothes, there are fewer bad purchases and you always have a new outfit without a guilty conscience.
In this way, everyone can save CO2 and resources without sacrificing variety!
In this way, sustainability can be integrated into every wardrobe easily and inexpensively IMMEDIATELY.
We consciously focus on an offline service and want to grow sustainably with local stores (and communities).
We already have stores in Cologne and Freiburg - NOW it's BERLIN'S turn!

We want the Kleiderei community to grow so that more and more people can borrow clothes and we can change the clothing industry for good.. We want to democratise fashion, contribute to a change in consciousness and anchor the value of clothing in the minds of consumers again.

We keep our membership fee as low as possible and provide our community with information about the fashion industry, educate, give tips and organise events such as clothing swaps, workshops and discussions.
Kleiderei is an offer for all those who wants to consume consciously and sustainably and are looking for alternatives. Our offer includes women's and unisex clothing mostly from size 34-44, different styles for every occasion.

To use what already exists is the best for our planet!
With the concept of the Kleiderei, we want to encourage the industry and consumers to rethink and, through easy access, make renting clothes a natural alternative to buying them.

Our vision: A nationwide Kleiderei community that rents clothes across cities and thus helps to shape fashion in a sustainable way.
TOGETHER WE ARE STRONGER!
Without Corona, we would have been there long ago...several times we had to postpone our plans. After 12 months of pandemic, our start-up capital is gone - but we want to get started now: Berlin needs a clothing store like Kleiderei!
Support us and be part of the movement and make fashion sharing in Berlin possible!
By the way: We will soon also multiply our concept as a franchise. This way we can also support young motivated founders to successfully set up their own stores.

We want to create a real place where everyone feels comfortable and a local community develops that not only exchanges clothes but also knowledge. But of course we need money for the location, renovation, furnishings and goods.
Because here, too, we remain true to ourselves: it should be sustainable-good!

No cheap off-the-peg furnishings! Together with designer Hannah Kuhlmann, we have developed a furnishing concept that can be built from high-quality materials and is durable. In addition, furniture from manufacturers in Germany.

The goods also have to be ordered. In addition to vintage and second-hand fashion, the Kleiderei will also offer fair fashion; plus sustainable accessories and gift items, such as upcycled products.
...and of course we hope to celebrate a smashing opening party with you!

Lena Schröder implemented Kleiderei - founded in Hamburg - offline in Cologne in 2016 and has been working steadily to develop and spread the concept ever since.

Hannah Frahsek studied clothing technology in Berlin and Ghent and did her semester internship at the Kleiderei. In the process, she became so enthusiastic about the project that she stayed with us as a fellow campaigner and eventually wrote her bachelor's thesis on the topic of fashion sharing.
Now she wants to return to the capital and thinks: Berlin urgently needs a Kleiderei store!

Julia Hermesmeyer trained as a seamstress in Hamburg and then studied integrated design in
Bremen. In Berlin, she founded the upcycling label Dzaino together with a friend. This is how the first contact with the Kleiderei came about, as the Dzaino bags were included in the Kleiderei's range.
Now a new chapter has begun and Julia, together with the Kleiderei Team Cologne, finally wants to open a store in Berlin, because she also is convinced: What Berlin is missing is the Kleiderei!

➜ You think so too? Join us!
We would be happy if you start to take responsibility as a consumer in your wardrobe.
Already 1000 thanks for your support and your willingness to make a difference (yourself)!
Sharing and spreading the word is cool! 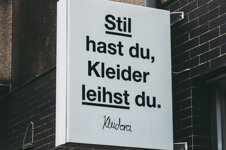