A game by Peter Höfer, edited and designed by Gerhard Junker. With tactics, fast pace and team spirit – for 2 dice-handball game players, 10 years and up. "Let the great tournament begin – and GOOOAL!"

The sport of handball is characterized by quick moves and a lot of goals. KONTER ("Counter") has been inspired by this; with its specific game course, it creates a similar feel of play. With this project, we want to bring the excitement of the original sport to your game table at home.

An overview of the course of the game

You can find the quick game rules for one player (incl. all action possibilities and kinds of throws) here:
www.juhu-spiele.de/downloads/konter-quick_rules_EN.pdf

Simple rules for beginners make it easier to become familiar with the dice-handball game; and rules for advanced players spark off "storms of enthusiasm" and provide long-lasting replayability appeal. The short playing time of around 30 minutes stimulates players to engage in follow-up matches or a big tournament.

There are only very few really good sport simulations. One of the best and most successful is Tischkicker – however, this is more of a game device. KONTER is a board game where handball fans, like their "great idols," can conjure up perfect throws off the cuff. We would achieve our best goal if, after a gripping game, players said: "Let's do it again!"

This is for all those who love games for 2, are tournament enthusiasts, and want to become dice-handball champions. As in the sport, this dice-handball game comes not only with varied and quite challenging playing options, but also contains a certain amount of luck.

In KONTER, both players are constantly involved in the game. This generates the special dynamics of the board game. Each game turn is followed by a direct reaction from the opponent. This is what the active player has to take into account when choosing his die and his action, since this prepares the ground for the opponent's next game turn, when he will be the active player.

The die is the handball

You'll find the complete game instructions and a print-and-play version in the blog. If you like what you can see and try out so far, please call the attention of other handball fans and board game enthusiasts to this project, too. We would appreciate any kind of support very much. And we would also like to thank all those who have already supported this project in its test phase with their valuable feedback and thus were instrumental in making this possible!

First, the final graphics and the illustrations for the cover, the gameboard and the accompanying booklet will be completed. After that, 1,000 boxes (20 x 20 x 3 cm) will go into production – handy and jam-packed with high-quality game components and plenty of playing fun. KONTER – made in Germany.

The components of the basic game

If the financial goal is exceeded, even more game materials are possible (which would be included for all supporters). After reaching the funding goal, the first stretch goal (beyond 9,000 €) would be a writable tournament pad (25 sheets for 2 to 4 players). The second stretch goal (beyond 10,000 €) would be exclusively for supporters: the "Turner" expansion for more goals (3 cards per player). Further "stretch goooals" will follow as an update.

Peter Höfer (from Northern Germany) is the author of KONTER; some years ago, he had already tried to self-publish an early version of the game. Only recently did he come across an interview with Gerhard Junker on zuspieler.de on the subject of crowdfunding. Consequently, he asked Gerhard whether he would like to co-operate with him regarding the further development of his Tischhandball – and aroused his interest. He is a passionate table tennis player and, of course, a big handball fan.

Gerhard Junker (from Southern Germany) is responsible for the editing, designing and production of KONTER. The development process of this game is a very interesting challenge for him, since up to then he had exclusively focused on his own game ideas and projects. One of these projects was successful on Startnext in 2013: www.startnext.com/en/blocky-mountains 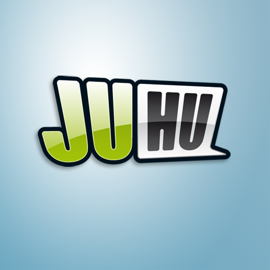 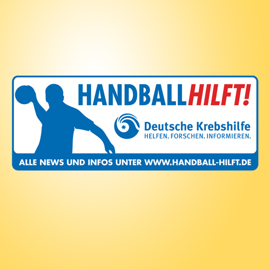 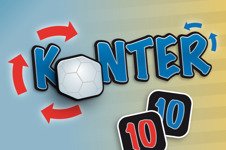