Crowdfunding finished
With our actions we want to bring a little more openness and solidarity not only into the classical music world - help us to put on further charity concerts, have bags printed with our message and stream our Chat for Change series on all channels!

Michael Schmidt Projektberater "Brillant crowd financing round, I am curious how this project will continue."
Privacy notice
Privacy notice

We are a collective of six international professional musicians, founded in April 2020. It is our goal to raise awareness of certain social issues through meaningful projects. We also want to raise awareness of problems within the classical music industry and collect donations for people in need, through teaching campaigns and charity concerts.

With our actions we hope to make music enthusiasts, enthusiastic not only about the music, but also aware of the social problems. With our series Chat for Change, we want to move the music industry a step in the right direction and together with the community, find out where there is a need for action.

We are trying to use music for good. Music is, after all, a language that everyone can understand

teaching for solidarity → An online instrumental teaching campaign lasting several weeks in November: 100% of the proceeds go to a charity organisation, yet to be selected

chat for change - An interactive online conversation & podcast → Monthly interviews on Facebook and a podcast with various significant personalities from the international music scene.

Charity concerts (twice a year, 100% of the proceeds go to supporting non-profit organizations)

Following the question of how music and music makers can show social responsibility and solidarity in society, our collective of six international professional musicians was founded in April 2020. We don't want to retreat to concert halls, but rather understand music as a creative and powerful tool for raising awareness of current issues and to generate critical impulses within the music scene and outside of it, as well as to generate funds for supporting charitable purposes.

So far we have successfully collected € 3,555 for "medical volunteers" and €1,235 for "Frauen helfen Frauen Heidelberg". We have also conducted three online interviews. 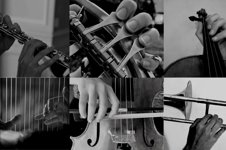