Japan for all senses! From June 2 to 7, 2015, the Japanese Film Festival Nippon Connection in Frankfurt am Main will celebrate its 15th anniversary. The festival will have a line-up of more than 100 of the latest short, documentary, animation, and feature films from Japan, many of them presented by the filmmakers themselves. A diverse cultural program with workshops, lectures, exhibitions, and concerts will top off the festival, which is organized by a volunteer team of around 70 members.

From June 2 to 7, 2015, the Japanese Film Festival Nippon Connection in Frankfurt am Main will celebrate its 15th anniversary. The biggest festival for Japanese film worldwide is still organized by volunteer members of the Nippon Connection non-profit association. The festival centers are located at Künstlerhaus Mousonturm and at Theater Willy Praml in der Naxoshalle. Further locations include the cinema at the German Film Museum, the Mal Seh'n Cinema and the GDA Wohnstift am Zoo. For our anniversary, we plan to show once more over 100 of the latest Japanese short and feature films as well as to present around 40 other cultural events.

In the NIPPON CINEMA section, we present Japanese cinema productions, out of which the audience can choose the winner of the “Nippon Cinema Award”. Starting with the 2013 edition of the festival, we have dedicated a special section to animation films: at NIPPON ANIMATION, we would like to introduce you to the diversity of Japanese animation films – along with current productions from Studio Ghibli, you can see the works of young independent animation artists. The NIPPON RETRO section takes a glimpse back at Japanese film history, focusing either on a particular topic or on one particular director who has influenced today's filmmakers (the retro for the upcoming festival is still in planning).

Over the last years, Nippon Connection has become an important forum for young Japanese directors. In the NIPPON VISIONS section, young filmmakers can present their works to an international audience for the first time, experiencing what impact their films have on the viewers. Since 2010, an international jury gives the “Nippon Visions Jury Award” to the best film in the NIPPON VISIONS section. The winner will receive a subtitling for his or her next film, provided by the Japan Visualmedia Translation Academy (JVTA). The Center for Japanese Culture in Frankfurt will sponsor the “Nippon Visions Audience Award” for the second time in 2015.

The festival also offers a lot for its youngest visitors: the program section NIPPON KIDS aims to introduce children between 6 and 12 years to Japanese culture in a playful way. There will be kendo for kids, a painting workshop, and a cooking class especially for children – and of course Japanese childrens' films with live translations into German.

What do we want?
At Nippon Connection, we want to share the diversity of Japanese cinema with the German audience. Japan is one of the most productive film countries in the world. Every year, more than 500 feature and documentary films are produced there. At the festival we show a carefully curated selection of the best films from the last two years. Only at our festival do people have an opportunity to see so many current Japanese films of various genres. Many of these films will never be available on DVD or in cinemas in Germany.

The exchange between filmmakers and the audience is particularly important to us. Within the Japanese film scene, our festival has garnered a reputation for being a perfect platform for filmmakers. We have already discovered many talents who have attracted international attention after their premieres in Frankfurt. We have also welcomed an impressive number of renowned guests: Koji Wakamatsu, Toshiaki Toyoda, Nobuhiro Yamashita, Kaori Momoi, Shinya Tsukamoto, Tomorowo Taguchi and many more.

After the triple disaster of March 11, 2011, and the lingering difficulties at the Fukushima Daiichi nuclear power plant, the filmic approach to the consequences of the disaster for the country and the people is an important topic at the festival. We intend to show some of the current feature and documentary films dealing with the catastrophe again in 2015.

In order to turn the festival into a unique experience, we place high value on an inspirational atmosphere. During the festival, our main locations Mousonturm and Naxoshalle will become a Japanese oasis with a tea lounge, a karaoke bar, and a market for Japanese delicacies.

Who do we make the festival for?
The festival is aimed at the broadest possible audience: people of all ages, be they fans of Japanese culture, film aficionados, or just generally interested in art. Given the extraordinary film program we also expect many international professional visitors.

Nippon Connection has become the biggest platform for Japanese film worldwide and has an outstanding reputation, not only among Japanese filmmakers. With roughly 16,000 visitors, it is one of the biggest audience magnets among film festivals in Hesse. The festival is organized by volunteers with a lot of enthusiasm and is financed through public funds, sponsors and donations which have to be campaigned for every year.

Financing the festival is becoming ever more difficult. That's why we need supporters who would like to make their contribution to uphold the quality of the Nippon Connection Festival. Expenses for films, technical equipment, and the travel costs of our guests keep rising. If you support us, this will enable us to guarantee another extraordinary film and cultural program as well as many interesting guests for our anniversary edition in 2015.

We have created a list of attractive rewards for your support:
You can have exclusive tickets that are not for sale (invitations to receptions, film dinner, 5-ticket-passes, VIP festival passes) or that tend to be sold out quickly at the festival (cooking classes, film breakfast). You can also choose between our high demand merchandising products and our music CD "The Tokyo Metro Soundtrack" (only a limited number still on stock), or take a glimpse backstage, have a Meet & Greet with a filmmaker or a Japanese dinner with the festival team. Moreover, all supporters will be named on our homepage (of course, you can also make an anonymous donation).

With your donation, you can contribute to the success of Nippon Connection! Thank you very much!

You make the festival happen! We do receive funding support from the Land of Hesse and the City of Frankfurt, and there are also some private sponsors, but unfortunately, this is not enough to finance the festival.

We are officially acknowledged as a non-profit organization – the festival doesn't generate any profits. The money collected with this crowdfunding project will be invested in rental fees for films, costs for film transportation, and travel costs of our guests as well as film, video, and other technical equipment.

The festival is organized on a voluntary basis by the non-profit Nippon Connection registered association. The organization team consists of around 70 members – students, people of various occupations, senior citizens. During the festival, the team is supported by more than 150 additional volunteers. 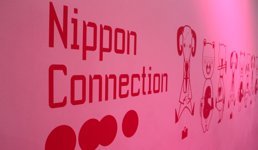