Crowdfunding finished
„Holy s##t!“ was my very first reaction when I saw Ioana’s grandparents BARN. Nothing from what I saw in one old black-and-white photograph could describe the actual state this BARN is nowadays. Once an architectural little piece of jewelry, this thatched-roof BARN that defines the culture and history of the region has become a pitiful ruin. Together with your graceful support, we will try to transform this relic into a vivid monument ready for future generations: a real Transylvanian landmark

A little bit of armor tape here, a touch of roofing paper there..it's magic what a little bit of money can do. MAIN thing: it will slow down its current decay!

Until nowadays, Transylvania’s landscape, historical & cultural heritage remain quite untouched –being protected by the surrounding Carpathian Mountains; perhaps this is also how the Transylvanians have still managed to maintain their traditions alive. For example, the Transylvanian Germans have built fortified churches and fortresses that are many in UNESCO. But, hey! This project is not about all these and the typical touristic Transylvania; quite the opposite, the BARN we are trying to rescue/restore is one of the very few (architectural) landmarks that are traditional (and by that I mean of non German or Hungarian origin); its location is very restricted – mostly in ALBA + Maramures counties and its exact origin remains unknown. Not only that it is typical for just 2 out of 14 counties in Transylvania, but- even in this county (ALBA) where Ioana’s BARN is- it is to be found only in what is called <the Stone Land> (Ţara de Piatră).
In the present days, locals have failed to realize the precious historical and cultural value of their remaining Barns- VERY few being rescued by either being locally restored or transported to Western Europe to be used as restored relics.
This campaign is aimed to restore and reconvert the BARN Ioana inherited from her great-grandparents. Built in the ’50, this particular BARN has already underwent a superficial roof renewal that unfortunately quickly failed. Home to many cows and oxen generations, cool parking for the grandparent’s traditional ox-pulled cart, the BARN barely stands; the most damaged part is the roof—through which hay-holes rains inside, slowly transforming the whole oak-wood structure into a ruin. We wish not only to put a new (hay) roof (respecting the original structure), but also safe the remaining wood beams. If this project is successful, the BARN will be turned into a living village-museum—being also the starting point of other similar projects in the region.
Our first crowd-funded successful project on Start Next is called <Dupa Gard>. With a total of €8.000 raised during 3 different campaigns, <Dupa Gard> convinced its ‘audience’ thanks to the ineffable wild nature landscapes, immense hospitability, great perks, and its slow tourism + sustainable traits. <Dupa Gard> Bio-Retreat House has already welcomed last Summer over 60 guests—from which we can proudly say 10% were our Startnext supporters. All of them were mesmerized by the quiet force of the untamed Nature and by our off-grid House. This current project is, though, quite the reverse of <Dupa Gard>: instead of building from ZERO, we will try to salvage what we can from this beautiful, and full with sentimental value BARN. Why? Because, as they wisely put it, “There is no future without a past!”

Led by one of the last in the region hay-craftsman, our main workshop (in autumn 2020) will teach the participants how a thatched-roof is built by using traditional methods and quality, ecological straw. Not only will the participants learn an almost forgotten handcraft, but also the practical meanings of preserving and reconstructing a national landmark. To this, as a plus, the accommodation will be in a place where Europe’s last virgin forests exist— tranquility, peace of mind and coming-together with the Universe being in the center of the everyday living in the Community of Posaga. For those not wanting to join the workshop, but still willing to support our project, we have prepared a series of (hard to say NO) perks that intertwine excursions, traditional gifts, culinary marvels and memorable events.

Once upon a time, each and every traditional household in the Stone Land had, apart from the house, its thatched-roof barn where the cattle lived during the winter. While right & left where the sheds, the centerpiece was occupied by the oxen-pulled cart and other field-working devices; left and right from the center was the ladder-accessible attic where the hay for cattle was stored during cold seasons. Every wooden piece part of the barn was carefully hand-carved—from which the most detailed remain the massive, impressive gates. Neither the Hungarian-German cultural proximity nor the hardship, dictatorial Communism years have managed to destroy the usage of the Barn. Sadly, after the fall of Communism, people (including from rural Romania) have left their homes to work abroad. Alba county with its <Stone Land> made no exception-- but, for as long the old people such Ioana’s Grandparents could still work the land and have animals, this type of construction was safe.
Nowadays, the only hand-full remaining people in the region are too busy surviving a hard life to still have the power and vision to salvage their traditional barns. Like in many parts of Western Europe 40-50 years ago, their traditional lifestyle will disappear. That is why, despite the modest amplitude of this project, we reckon it is an energetic and right thing to do as an example / starting point for similar projects > its complex educational aspects involving local craftsman and authorities, students, NGOs responsible for the preservation of national landmarks, and media.

Most part of the money will flow into the 2-part workshops meant to clean up, restore and reconvert the BARN into a village museum—containing not only Ioana’s family air looms, but also many saved/donated by the locals. Everybody has something to win: the village-Community will finally have a museum to show its guests, the BARN is saved and is given new meaning & purpose, and the participants learn magical hand-crafts of working with natural materials (mainly straw & wood).
Of course, what is left of the money will be spent on creating the other perks carefully chosen and detailed presented on this page.

We are the Joca-Pohl family with its roots in Transylvania (ioana), Franconia (andreas) and the whole world (our daughter Dhalia).
Since her ’20, ioana has been going back and forth to her grandparents village community (Posaga)—having not only organized a series of workshops and seminars, but also having made 2 documentaries and 24 clips about Posaga’s last traditional values.
Since 2017, for 3 entire summers, andreas was the MAIN on site worker / project implementer. (Also) Thanks to the 3 Startnext campaigns, the <Dupa Gard> project is nowadays an up-and-running off-grid & ecological start-up that aims to support as many as possible local and regional people by presenting their unique living and organic + handmade products to its guests. Andreas wishes that he can share his practical <Dupa Gard> knowledge to the interested future guests and participants.
Portfolio: a detailed presentation of our work is thoroughly presented here (blog only in German):
Dupa Gard 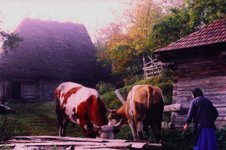