Michael Schmidt Projektberater "Brillant crowd financing round, I am curious how this project will continue."
Privacy notice
Privacy notice

My documentary film RAW CHICKS.BERLIN is an introduction to eleven Berlin-based international female music producers in the field of electronic music – with highly diverse backgrounds and approaches to their field of art.

For instance RONA GEFFEN – she had the feeling that she could no longer evolve artistically in Israel, she could not bear the violence, the hatred and the despair over there. „Berlin was the most reasonable place to move to.“ About her work she explains in the film: „A lot of what I write is very political, but the sound is also a message.“
ELECTR°CUTE is a project of the native Polish artist Kasia Justka. She says about herself, „I’m in love with energy, electricity, power – and everyone needs electricity!“ She produces sounds with electricity and translates this process visually on stage. „I love sparks, when I put the sparks on, I’m totally electrified, it is powerful.“ She came from Warsaw to Berlin in order to learn – she appreciates the many possibilities the city offers to develop her art further, the artistic environment and the inspiration from her collegues.
Or SILNAYE – in her Spanish hometown she was the only woman who made music (computer music), except for a few that started to DJ. „There was no-one who had the same experiences. When I arrived (in Berlin) I had the feeling I was at home. Like a real connection between me and the city. Out of the music. Out of a feeling that you’re in a place that you need to be.“

In a sense my film RAW CHICKS.BERLIN is also a film about the possibilities that the creative melting pot offers, which pretty much sums up Berlin, attracting artists from all over the world and bringing them together for an exchange of ideas.
I, too, came to Berlin a few years ago, leaving my hometown Chemnitz in order to find new creative input. In 2012, I started working, together with my partner, at RAW Tempel Club, which at that time was a popular venue for electronic dance music in Friedrichshain. Nearly every evening there was an all-male line-up and we asked the club owner for the reason why. His answer was, „I know only a few female artists. But if you know any, let me know. I’ll help you with starting your own party.'
This was the start signal for our RAW CHICKS events. During the past four years it has developed into an experimental platform for international female DJs, live musicians and visual artists. Their passion and their rich diversity inspired me to start a series of filmic portraits of some of those musicians who had been live acts at RAW CHICKS parties.
Those eleven women featured in my documentary RAW CHICKS.BERLIN, are part of a much larger, vivid scene of female music producers who can be found regularly performing on Berlin's open air stages and in the city's clubs, concert halls, galleries and art spaces.

Even more information to be found here:
on the facebook page of RAW CHICKS events:
https://www.facebook.com/raw.chicks

in the soundcloud profile of RAW CHICKS events:
https://soundcloud.com/raw-chicks

on the facebook page of the film „RAW CHICKS.BERLIN“:
https://www.facebook.com/rawchicks.berlin

you can reach Beate Kunath directly under her email address:
[email protected]

The film RAW CHICKS.BERLIN addresses everybody who wants to be inspired by the unique, lively and adventurous Berlin underground music scene. It takes you on a journey through the clubs, concert halls, galleries and into the studios of the musicians featured in the film.

It’s also a film for all those who would like to be infected by the humor, creativity and power of eleven exceptional artists to pursue or follow their own goals and projects.

Furthermore it is a film for music and art lovers who enjoy diving into a world of ideas and sound located far beyond the mainstream.

I would like to make the film accessible to a wider audience: to screen it in film festivals and music events in the field of electronic music and of course to show it in cinemas and release it on DVD.

Your support enables me to showcase the artistic diversity of women in electronic music. You will be part of creating a more realistic, unbiased perception of art and creative processes, beyond categories of gender, descent and cultural or ethnic affiliation.

If you like electronic music, you’ll get to know through RAW CHICKS.BERLIN eleven totally different innovative female artists whose music you might never have discovered in your own day-to-day clubbing routine.

Up to now the film has been produced without any funding. But I need additional financing for final touches during post production, which I cannot handle on my own and which are necessary to make the film suitable for the big screen at festivals and in the cinema:

Beate Kunath, born 1967. I am a filmmaker and visual artist with a focus content-wise on the documentary. Until now my work has included short fiction films, documentaries, music videos, video installation art and photo series. For the semi-documentary debut film „Forbidden Fruit“ (2000), a co-operation with Yvonne Zückmantel and Sue Maluwa Bruce in Zimbabwe, I received several awards, among them the Teddy Award during the 51st Berlin Film Festival „Berlinale“ 2001.
Without exception the protagonists of my films, whether they are fictional or real, are women with a focus on women's experience. Same in my last two documentary films, „...geradezu heraus. Irmtraud Morgner in Chemnitz“ (2008) or „On This Same Day“ (2013).
In 2012 I co-initiated the RAW CHICKS events at RAW Tempel Club in Berlin-Friedrichshain. The party has changed locations a few times and presently takes place quarterly. I create conceptual video art for these parties, where I collaborate with the live acts as a VJ. These works are also shown in galleries as art installations, most resently in the „Galerie Weltecho“ in my hometown Chemnitz. 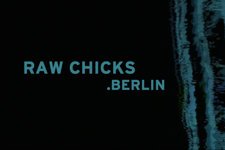