<% user.display_name %>
Log in
Music
On March 14, 2020, our performance of Georg Philipp Telemann's comic opera PIMPINONE should have premiered on stage at the Magdeburg Telemann Festival. Due to the outbreak of the new Corona virus, the rehearsals had to be cancelled shortly before the dress rehearsal. We now want to save the project by at least recording the musical side of our artistic work on CD. Help us to realize a true jewel of baroque music together with our singers Dominik Köninger and Marie-Sophie Pollak!

With every donation you help us!

That is our goal!
Only with this sum we can record the CD.

PIMPINONE was Telemann's greatest stage success. The work was first performed in 1725 during a premiere of Handel's "Tamerlano" in Hamburg. As in many opera houses at that time, it was customary to liven up large operas with entertaining works, so-called 'intermezzi'.

The title character is the old and wealthy Pimpinone, a true geeker, who bursts into love with his valet Vespetta. But the young and coquettish Vespetta becomes quickly the secret heroine of the chamber play. After the fraudulent marriage, Pimpinone is no longer the master of his house...

With this CD, fans of opera and baroque music worldwide will be able to rediscover Telemann's musical genius. Despite the popularity of the opera, performances are relatively rare. The last recording of the work is now almost 30 years ago. Currently the opera is not available as an individual item.

With this production, the Akademie für Alte Musik Berlin follows up on his internationally critically acclaimed recordings of works by Telemann. Alongside Johann Sebastian Bach, Telemann is the ‘house composer’ of the ensemble. Since its foundation almost 40 years ago, the ensemble has repeatedly and intensively studied and rediscovered Telemann's works.

Akamus is also the winner of the Georg Philipp Telemann Prize of the city of Magdeburg.

There is currently (end of March) no way of knowing when normal concert activity will be possible again. Since the project was about to premiere, most of the rehearsals have already taken place. Therefore the project is to be postponed as a CD project at a later date.

CD productions are more cost-intensive than concerts and can often only be shouldered by the participation of several partners.
For the technical side we were able to win Deutschlandfunk Kultur and the CD label cpo.

PIMPINONE is a heart project of the orchestra, which classical music fans can actively support to make the recording possible.
A brilliant recording is to be expected, which every fan of baroque music can look forward to. Your active support will be rewarded with special rewards!

The money will be used to support a CD production that will last several days. There are costs involved - from the fees for musicians and singers to the rent of rehearsal room and the recording studio, costs for travel, hotel and organizational costs.

The German baritone Dominik Köninger has been a member of the Komische Oper Berlin since the 2012/13 season, where he has performed many great roles such as Orfeo, Count Almaviva, Papageno, Figaro and Pelléas.

First prizes at the Mozart Competition in Würzburg and the Wigmore Hall Song Competition are proof of his skills in lyrical parts and chamber music.

Marie-Sophie was a finalist in the International Singing Competition for Baroque Opera "Pietro Antonio Cesti". She has been awarded the German Scholarship twice, is also supported by the Yehudi Menuhin Live Music Now organization and is a scholarship holder of the Christl and Klaus Haack Foundation.

The violinist Georg Kallweit grew up in Greifswald on the Baltic Sea. He studied in Berlin at the "Hanns Eisler" Music Academy. In addition to his later engagement with the Rundfunk-Sinfonieorchester Berlin, Georg Kallweit dealt early and intensively with questions of style in pre- and early classical music.

As concertmaster and soloist of the Akademie für Alte Musik Berlin - and as a guest of other renowned ensembles - he is a sought-after specialist today.

As a lecturer and leader of master classes he teaches at the music academies in Leipzig, Weimar, Berlin, Rostock, Helsinki and St. Petersburg. In addition, he has been a lecturer of the youth baroque orchestra "Bachs Erben" since its foundation.

The Akademie für Alte Musik Berlin (Akamus) was founded in 1982 in Berlin. Since its beginnings, it has become one of the world‘s leading chamber orchestras on period instruments and can look back on an unprecedented history of success. From New York to Tokyo, London or Buenos Aires, Akamus is a welcome guest, appearing regularly at the most important venues throughout Europe and internationally, touring as far afield as the USA and Asia.

As well as working with guest conductors, the orchestra is often directed from the leader‘s chair by one of its three concert masters Bernhard Forck, Georg Kallweit or Stephan Mai.
The ensemble has an especially close and enduring partnership with René Jacobs. In the recent past, Akamus was directed by Emmanuelle Haïm, Bernard Labadie, Paul Agnew, Diego Fasolis, Fabio Biondi and Rinaldo Alessandrini.

Akamus‘ most fruitful cooperation with the RIAS Kammerchor has produced many award-winning recordings. In addition, the ensemble maintains close cooperation with the Bavarian Radio Chorus. Regular guests include internationally renowned soloists such as Isabelle Faust, Alexander Melnikov, Anna Prohaska, Michael Volle and Bejun Mehta. Together with the Sasha Waltz & Guests dance company, Akamus has developed successful productions such as Dido & Aeneas (music by Henry Purcell) and Medea (music by Pascal Dusapin).

Akamus’ recordings have won all important awards for classical albums. The orchestra has been honoured with the Telemann-Preis Magdeburg in 2006 and with the Bach Medaille Leipzig in 2014. 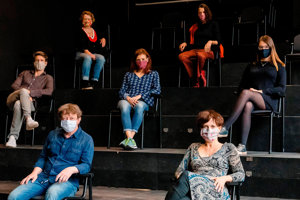 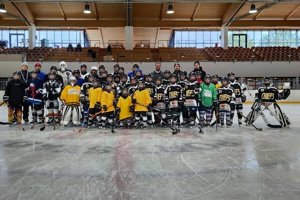 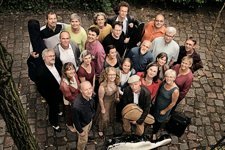