A Golden Age of Jewish music almost forgotten - the songs captured in 30s' Berlin by Hirsch Lewin on his Semer label. “Semer Reloaded” brought this amazing music back to life with critically acclaimed concerts throughout Europe in 2012-15. Now it is our dream to record this music live in concert so that, 70 years after the Holocaust, the legacy of the Semer label can be passed on to present and future generations.

From Artistic Director, Alan Bern:
We're asking for your help to cover the basic costs of the recording of “Semer Reloaded." With your support we can bring Hirsch Lewin's Semer Label and the legacy of Jewish musicians in Berlin in the 1920s-30s back to life, 70 years after the end of the Holocaust, with fresh interpretations, re-workings and arrangements of originals, to be recorded live by a world-class ensemble of artists based in Berlin and New York, such as Grammy winner Lorin Sklamberg, Daniel Kahn, Sasha Lurje and others.

It's an almost incredible story. Berlin in the 1920s was home to a true Golden Age of Jewish music and musicians. Then, in the 1930s, even as the Nazis came to power and brutally repressed Jews and Jewish culture, Hirsch Lewin's Semer label recorded dozens of Jewish artists for posterity, before they were silenced by the Holocaust. On November 9, 1938, SA hordes destroyed Hirsch's Hebraica/Judaica shop in Berlin's Scheunenviertel district, including 4,500 records and about 250 metal plates and the Semer label was shut down. For decades, the recordings were lost and virtually forgotten, until they were heroically recovered and restored by musicologist Rainer E. Lotz. In 2012, the Berlin Jewish Museum commissioned me (Alan) to create a concert of new arrangements of the archival recordings. To realize the project, I put together a great band that unites senior pioneers of Jewish music like Lorin Sklamberg and Paul Brody with the new generation of amazing performers such as Daniel Kahn, Sasha Lurje, Mark Kovnatskiy and others. The result is Semer Reloaded.

With your support, we can present this incredible music not only as an archive of 80-year-old recordings or for a few lucky concert audiences, but as living music for the whole world through a state-of-the-art album release with great sound quality. We've got a strong a supporter in the Gorki theatre in Berlin, which has agreed to host our recording sessions live in concert. We'll team up with London-based music producer Ben Mandelson, and Berlin-based Piranha Records will take on the task of producing a high-quality recording as well as publishing and distributing it. Only 80 seats will be available for the concerts on on the 3rd and 4th November: by contributing only 30 EUR to the campaign you can witness the recording first-hand!

For the first time since the Holocaust, Berlin is once again an international magnet for Jewish music and musicians: Semer Reloaded brings together a very special group of performers to re-interpret the original Semer recordings for contemporary audiences. In three live concerts in Berlin, we'll record some of the most striking titles from our repertoire and release them on CD.

The project is for everyone who cares about the depth and beauty of an amazing, historically unique legacy of Jewish music and musicians that the Nazis labelled "degenerate" and tried to destroy forever and erase from memory. It is also for anyone who cares about creative and vital music of today that is inspired by traditions and voices from the past.

This is a unique opportunity to contribute to and be a part of this mission, for both fans of the artists involved and friends of exclusive live events.

It’s also for anybody who is interested in having and sharing a copy of the finished product, of course.

With your help, we want to revive the music of Semer for contemporary generations, ensuring that it will not be forgotten. With up-to-date, state-of-the-art versions of the originals, the repertoire can not only be saved from oblivion but also reach an audience many times larger than the one it currently reaches. It can have a future. But we need your help to make it happen!

A Semer Reloaded concert is planned for November 5th, 2015 at Maxim Gorki Theater, Berlin. We will also make high-quality recordings of the project during two additional live concerts, on November 3rd and 4th.. Admission on the 3rd and 4th is reserved exclusively for contributors to the crowdfunding campaign - only 80 seats are available per event!

Piranha Records can turn the dream of this recording project into a reality. Now we need your help to cover the basic costs of the recording!

If we reach the funding goal of 25.000€, we'll also create a special LP (vinyl) edition of the recording. We will also film the concerts to have a permanent visual document of this remarkable group of artists making this important recording.

Most important of all, the artists involved with Semer Reloaded: (A-Z)

They will be supported by the renowned London-based producer Ben Mandelson and Piranha Records, the Berlin label that has, from 1989 onwards, stimulated new interest in Germany in contemporary Jewish music from around the world. Releases include: the Klezmatics, Frank London's Klezmer Brass Allstars, Maurice El Medioni, Solomon & Socalled, Watcha Clan, Ruth Yakoov Ensemble, Emil Zrihan and more.

Piranha Records & Publishing is an independent Berlin-based company with more than 150 album releases to date, introducing new sounds and artists from the world to the world under the triad of globalisation, tradition & subcultural understanding. 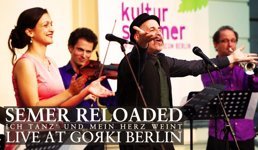