The documentary accompanies a human rights seminar uniting 30 young adults from Germany, Ukraine and Belarus for three one-week seminars, in which they discuss the state of human rights in general and in their countries. The project’s aim, to create campaigns, may become a hazardous undertaking. It's the sensitivity of the project which makes it even more important to document the happenings - to give voice to the participants and create transparency. Find recent developments in our blog.

Early this year, we got in contact with the "Initiative Mittel- und Osteuropa" (Initiative Middle and Eastern Europe) because of their project „Speak up for Human Rights! Use new Media!”. In three separate workshop weeks (January-May 2012) they discuss human rights with 30 young adults from Belarus, Germany and Ukraine. In order to form a common basis, the participants learn about the past and present state of human rights as well as about how to promote those rights. All of this is supported by the use of new media.

The consolidation of young, politically interested people, who are of the same generation but come from very different political and social backgrounds, is the project’s priority just like the realisation of human right campaigns.

After the first workshop week in Berlin was a success, it was planned to go to Belarus in March. However, as the Belarussian embassy refused our entry admission, these seminars will now take place in Ukraine. At the end of the project, we plan to create a 30-45 minute documentary which shows the progress of the project and portraits the generation, their living conditions in Central and Eastern Europe, and the limitations they have to face.

The film intents to document the project and its participants who come from different political and cultural systems and represent parts of our European continent. How do they see their joint future, what are their desires, hopes and visions for their countries? What kind of external powers are they facing in their daily struggle to maintain their grounds and their human rights? And how do they relate to each other, what do they talk about, what do they leave aside?

There are 45 big, internationally active human rights organisations. Amnesty International alone is supported by about three million people through funding or volunteering. The interest in human rights spans over all ages and country borders.

We will submit the documentary to festivals and broadcasters in order to reach the largest audience possible. Moreover, we will make it available online.

While human rights should be the basis to our all behaviour, they must not be suppressed by regimes – it is of particular importance that those regimes do not succeed in blurring or cloaking the view on the people of those countries affected.

The documentary of this project shows a small part which stands for a greater part that should concern all of us.

The will for change, the curiosity and the openness demonstrated by the participants created a special atmosphere in the Berlin workshop. It was an atmosphere of collective awakening in hope for better days, in which human rights will not be trampled on or the individual has priority.

As the project is still in its infancy, we need your support in order to be able to document the happenings and eventually make a film that creates transparency and draws attention.

The entire funding goes to the finalization/postproduction of the film, for which we will have to hire costly competences that we ourselves cannot deliver:
- Fine cutting
- Image and audio postproduction
- Coloration
- GEMA-free music production
- Graphic design

The required sum of 4.494 € is calculated tightly. If we achieve to raise more money, we will be able to guarantee for quality improvement. Hence, if we raise more than 100% funding, the money will go the following:

Sebastian Hasse studied computer science and drama. He ended up in the film business over producing interactive DVDs. While he works as an computer scientist half of the time, he devotes the rest of his time to making film projects. Among others he produces the intercultural web-comedy-series „Points Of You“: www.pointsofyou.eu. In the board of the non-profit organisation “Kunstwandel e.V.i.G.” he engages in the support of the free filmmakers and art scene in Berlin: www.kunstwandel-berlin.de.

Johannes Franke is cameraman, cutter, and director as well as an actor, which makes him a film maker all through. His most recent movie EWE successfully ran at the "up-and-coming" film festival in Hanover and at the „Youki“ in Wels (Austria). In the past years he mostly worked on documentaries such as a short documentary on a gestures singing workshop for deaf children with Rolf Zuckowski and a long-playing documentary on the generation of “young entrepreneurs”. More information on his work as a filmmaker on: www.gone-astray-films.de – and on his work as an actor on: www.johannesfranke.de

Lara Sielmann studies Creative Writing and Cultural Journalism. She is working as a freelance journalist, production manager and as assistant for miscellaneous cultural projects such as: litradio, Edition Pächterhaus,100 Wort!, documentary “Gründerbus” and is the co-editor of Landpartie 2010, Kein Katalog.

If you have any questions or comments about the project or if you want to support us with a large amount and talk to us about the conditions, then contact us: [email protected]

Meet other fans and supporters of this project and other interested parties on human rights on our FACEBOOK page. Take part in the development of this film.
http://www.facebook.com/speakup4humanrights

english | deutsch We are back from the Ukraine, where we collected some important voices of young people from Belarus, Ukraine and Germany. The issue is growing, but also becoming more dangerous. We open our eyes and do interviews with other human rights activists who are trying to change something in their countries. Like this we can give a better overview of the general human rights situation in Central and Eastern Europe. The final phase of this campaign has now started. The clock is ticking and we urge all fans and supporters once again to spread this campaign as much as possible. We can only say with all our hearts: This film is really worth it. Thank you for your support! Wir sind zurück aus der Ukraine, wo wir wichtige Stimmen junger Menschen aus Belarus, der Ukraine und aus Deutschland eingefangen haben. Das Thema wird immer größer, wenn auch gefährlicher. Wir öffnen den Blick und führen Interviews mit weiteren Menschenrechtsaktivisten, die versuchen in Ihren Ländern etwas zu verändern. So können wir einen besseren Überblick über die allgemeine Menschenrechtslage in Mittel und Osteuropa geben. Es geht nun in die finale Phase dieser Kampagne. Die Zeit läuft und wir bitten alle Fans und Supporter nochmal darum, diese Kampagne möglichst weit zu streuen. Wir können nur von ganzem Herzen sagen: Dieser Film ist es wirklich wert. Danke für Eure Unterstützung! 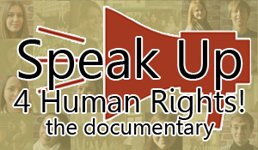