The card game „Stimmvieh“ ironically addresses a German election campaign. While all parties are bidding for votes and for realizing their election platforms, often the real issue is fundraising through donations and public refunds. Supporters can vote for campaign slogans and for who the campaign donators will be. Besides, up to 36 supporters can become politicians by placing their portrait onto a card, the back of the box or even its title. The gameplay is language independent. 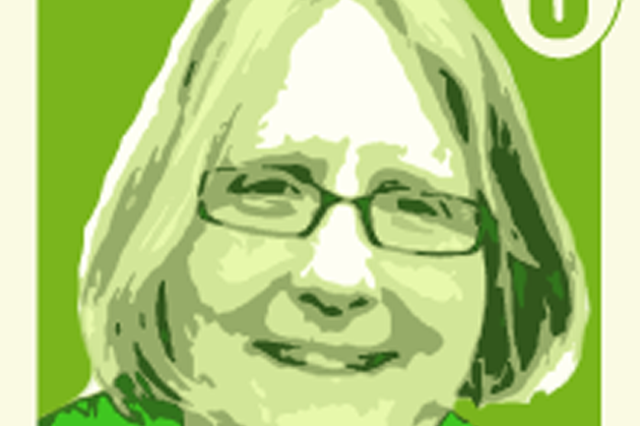 Supporters will enable the joint design and production of the card game "Stimmvieh" by Andrea Meyer:

What kind of game is this?

Four-color rulebook in German and English

How does the game play?
In this fast and interactive card game 3 to 4 players manage political parties. Each party has four top candidates and five backbenchers.

The players take turns in playing an influence card with a politician to acquire campaign votes or donations. A simple move, if it didn't trigger the selection of cards for the next player. The occuring dilemma - taking the best card without granting the next player too much - makes the game attractive again and again.

And so you sometimes have to bite the bullet and play a more influential politician than necessary. Otherwise the next player might get more votes than it seems to be tolerable ...

Suspense rises continuously until you find out if you are one of the two players who may double their donation due to the amount of votes collected. Of course the player with the most donations wins in the end - just like in real life.

Playing with three players
The players take turns in making a move for the fourth party that is led by a dummy. If you do not grant the others anything this may lead to the dummy winning the game - inot exactly what you all hoped for ...

Why are photos and artwork important?

The artwork shall inspire thematic playing. Of course you can comment on a move with "I take the 8 with a 9". However, it's greater to say: "I am sending my deputy to the stadium for the play-offs and take the 25,000 votes." And, addressing the next player, you could add: "For you I make this 50,000 € donation available, I guess you need the money, don't you?"

Andrea, the game designer, asked Daniel, a graphic designer, and Klaus, a photographer, to join the project, so as to increase the cards' affordance. And this is where you join the game!

We want you! On the cards! With your portraits, names and slogans. And as supporters, of course!

For Stimmvieh shall connect the delight in gaming and in politics. This will work best if many people enjoying politics and/or games support this project and thus make the game and the cards authentic.

After all, there are enough current political issues every day that deserve being acknowledged in such a game. On some of them Andrea twitters at @andreacmeyer.

Why isn't the game published by a big publisher?

In recent years Andrea offered the game to several bigger publishers. Mostly, it didn't meet the requirements due to its political theme, sometimes the number of cards did not match the current product line.

Besides, Andrea fears that upon trying to make the game match the mainstream, it would suffer massively concerning theme and artwork. The irony in having the party with the most donations win in the end needs a bold political expression - another reason for making the game ourselves.

Game designer Andrea Meyer first published Stimmvieh on her own in 1998 and received a lot of acknowledgement. The total printrun of 500 copies has been sold out for years, some collectors are looking for it.

Considering the game mechanics the first version has potential for improvements: While the 4-player-version worked very well, the versions for 3 and 5 players did not. The current version underwent an intensive review of the rules and several tests. It is a lot of fun with 3 and 4 players.

IMPORTANT: The pictures of cards at the top show the prototype Andrea built, not the final game!

Upon reaching the project goal Andrea can

Andrea covers the remuneration for graphic designer Daniel and photographer Klaus either from further support or from selling the copies of the game that do not go to supporters.

Who is the target group?

The challenge of reacting flexibly to the other players' moves and to the luck of the card draw increases replayability.

We count on you gamers to detect a "hidden gem" when you see one. And we count on you politically active supporters' contributions for slogans and your vote on the party donators.

IMPORTANT: Learning to play is easy, an audio-guide by Andrea will smooth the way for those of you who are not experienced gamers.

You can find the current status of the rulebook at http://www.spieledealer.de/bewitched/regeldownload/stimmvieh_en.pdf. Please note that this is not the final version until we say so.

Is this also aimed at retail?

If the project is successful, retailers can buy the game from the distributing co-operative Spiel Direkt eG (http://www.spiel-direkt.eu) which Andrea co-founded. If you'd like to do that, we're happy to welcome your indivdual support here.

If you like special games off the beaten track, Stimmvieh should be your choice.

Also, if you are a political person Stimmvieh is meant for you. For it's your suggestions and your votes that make the game unique.

We count on you!

The game shall become something special through crowd participation. Your portraits, your campaign slogans and your voting on which lobbies will donate money to parties will make it to the cards. Those portrayed and those who invented the slogans will of course be mentioned.

Thus Stimmvieh will create an impression which political issues are moving you. And will so keep you from being Stimmvieh - voting cattle - and make you active participants in every day politics.

Beside copies of the game there are special rewards you will only get here at Startnext.

Be mentioned!
All supporters will be mentioned on the website http://www.bewitched-spiele.de. Besides, some rewards come with a mention in the rulebook.

Please also check on the Internet if anybody came up with your slogan before you did - thanks! If so, please come up with another suggestion.

Decide who is donating
Supporters can vote which of the lobbies we suggest will finally make it to the game.

Become a politician
36 supporters can place their portrait on one of the influence cards! Four of you can be the most influential politicians, which will assure you a place on the back of the box. And one supporter among you can place his or her portrait on the box cover.

Additionally, these 36 supporters can also receive a valuable print of their edited portrait on paper or canvas.

For this, you send us three pictures (to which you have the rights, obviously). We pick one and edit it by applying the "Obama-style". This edited picture will then be put on the card and can also be printed on paper or canvas.

How do you take the pictures?

The easiest way is to have a photographer take your portrait with three different facial expressions. Obviously, you can use that portray later, too, e.g. in your next real election campaign ;-)

And here's what we tell you in the video:
camera: smartphone, or some other good camera
How: Selfie or have somebody take your picture
Format: upright / portrait format
Size: at least 5.9" high and 4.8" wide (the bigger, the better), 300dpi
Place: Take the picture in front of a light, unicolor background, in daylight, at a light place in the shadow. Use the flash if necessary (prevent red eyes, please)
No Go Places:

Look: smiling to neutral, towards the camera. Looking right into the camera is great but not necessary.
How Many: Please send us 3 pictures with different facial expressions to choose from.
As soon as the project is successfully finished, you will receive an email address to which you shall send your pictures.

How much does the game production cost?

The minimum printrun is 2,000 copies - this number is necessary to produce a card game professionally for an acceptable price in Germany. The costs are about 4,700 € net.

BeWitched-Spiele generally has games produced in Germany - because of the quality, but also because Andrea neither has the time nor the nerve to deal with customs or find out about labour conditions abroad before ordering a game.

What do we need the remaining money for?

For packaging and posting games in Germany we planned for 1280 € - suffice for sending 500 single games within Germany or 350 copies worldwide. Of course we hope that some of you order more than one copy which in effect reduces postage costs per game. Don't disappoint us ;-)

With successful funding of the project Daniel and Klaus receive an advance payment. This and the rest of their work will be paid from your support exceeding the goal - if there is any. Otherwise Andrea will pay for their work from revenues from selling the games you do not order.

How about the time plan?

Game mechanics are ready and fully tested. Currently Andrea is editing the rules of the game and has people proofread them. Voluntary lectors are more than welcome by the way (hint, hint).

After the campaign ends (successfully, that is), you have one week to send your portraits and suggestions for campaign slogans.

Shortly afterwards you will receive links to the voting about campaign slogans and campaign donators - if that is how you support the project.

After we know the result of the votings, we will finalize the graphic design and have the game produced. We are aiming at receiving the produced games in October, when we will start packing and sending the games to you.

What happens if we collect more money than we need?

First of all, we rejoice. Afterwards, Daniel and Klaus get paid the remaining money for their work. Depending on how many games you order through Startnext, Andrea might directly produce 3,000 instead of 2,000 copies.

If there is still money left afterwards, we donate 10% of it to the Lesbian and Gay Organisation of Germany (LSVD), who runs the only German centre for rainbow families in Berlin. You can find more information (German only) at https://berlin.lsvd.de/projekte/regenbogenfamilien/

We will then split the remaining 90% evenly and rejoice again considering the amount of work crowdfunding causes ;-).

Since 1998 Andrea has published games herself and was recently published by bigger publishers. Her biggest success is Hossa (https://www.facebook.com/Hossathegame), followed by Linq (http://boardgamegeek.com/boardgame/11945/linq) and Freeze (http://boardgamegeek.com/boardgame/76728/freeze), both of which were recommended by the jury Spiel des Jahres. With her wife and their son Andrea lives in Berlin, she co-founded the German game designer conference (www.spieleautorentagung.de) and the co-operative society Spiel direkt eG (www.spiel-direkt.eu). In this project she is in charge of game design, development, production, communication and financial management.

Daniel has been a freelance designer since 2003 and designs everything from business cards over catalogues to games. In this project, he drafts the look-and-feel and the overall layout of the game. He redesigns the party logos and the logotype for Stimmvieh. He also designs the cards and the rulebook, makes the game ready for printing and is in charge of the communication with the production company when it comes to the artwork.

Klaus has been a professional photographer since 2000 (http://www.klange.net/) and lives and works in Berlin. He edits your portraits and applies the Obama-style to them. He then delivers the files to Daniel. He is also in charge of anything photo-related (prints etc.) and made the pitching video and the other videos for this project. 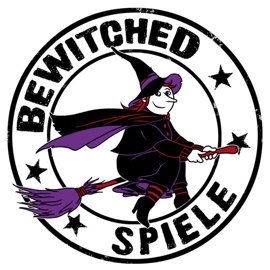 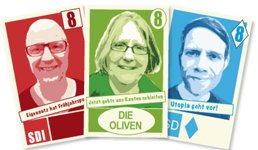