Crowdfunding since 2010
Crowdfunding finished
It`s NAO or never! With NAO Studios you can be sure, we tell you the truth. Bye greenwashing, ciao f****** exploitation, adios fast fashion. We strive for a world where fair, honest, radically transparent and sustainable fashion (production) is the norm. Are you joining us?

Materials for further development, the start of the first production, fair wages (Living Wage!) for the seamstresses and for transport and administration.

NAO Studios was born in 2021 from a tailor education project of the Eyes of Light Foundation in Ghana (founder: Mohammed Mukhtar) and my (Samira Kuljurgis, founder of NAO Studios) vision of putting an end to exploitation of people and the planet and nontransparent value chains.

We are not just another fashion brand!
We are fair, we are honest, we are radical transparent. full stop.
You will always and at any time know "What is in my clothes?", "Who made my clothes?" and at what price, including concrete pricing.

It is about (Women-) Empowerment!
We create job opportunities and thus a perspective and hope in life for (in the future hopefully many, many) young people in Ghana. Get to know our first 10 seamstresses here.

You can compare us to a small creative studio from which common ideas and timeless women's wear products arise.
Together with the seamstresses of the Eyes of Light Foundation we design patterns, try them out with selected materials, question fabric use, fits, quantities and quality. We exchange prototypes, teach and learn new (European) techniques for the sewing profession.

Check out our website and let us take you with us on our journey into the future. Learn all about our values and our vision of a world where fair fashion production is the norm.

We want to change the world of fashion.

Based on our three values - social responsibility, radical transparency and long lasting products - we want to produce timeless women's wear and are striving for a world where fair fashion (production) is the norm.

With NAO Studios we want to take the work out of researching brands and their statements and practices and show you that it is possible to produce honestly, fairly and transparently.
We do not want to become the biggest and most profitable company, but will always put people before growth and profit!
We focus on justice, equality, honesty and togetherness and want to support the "Fair (Trade) Fashion" sector and thus let it grow. We are convinced that together with many like-minded brands and especially with you as the end consumer, we can revolutionize the fair fashion sector.

Then we are here for you with NAO Studios!
Come with us on our journey to change the fashion system.

With NAO Studios you support a small, socially minded company at the very beginning, which will always question itself and keep up with the latest innovations in sustainable development whenever possible. That puts people before profit and growth.

We want to give the young women and men from Ghana a perspective and hope in life. With the job as a seamstress, they can earn their own living, develop themselves and support their community.
With NAO Studios we want to strengthen creativity and engagement and open a new world of possibilities to live a free, independent and happy life.

#haveanimpactonnaostudios
With your support, you have a direct impact on the creation process and the lives of our seamstresses. We create jobs, make living wages possible, can finish our prototypes, finalize cuts and fits, and begin production on NAO Studios' first full collection - fair, honest, and transparent fashion - available in summer 2022.

Let's revolutionize the fashion industry together!

When we reach the funding goal, we will finalize our cuts and fits and use the amount we have reached for materials like fabrics, thread, buttons, zippers and labels to start with the first small production of around 470 pieces.
In addition, we can pay our seamstresses fair wages (Living Wage!) and pay for transportation and administration costs.

If we get over the funding goal of 20.000 €, we will invest the money in the expansion of the project (more sewing machines/ storage space/ etc.) to give even more young people in Ghana the opportunity to become a part of NAO Studios.

Hi and Salams from Mohammed, all the seamstresses from Eyes of Light Foundation (Ghana) and me, Samira.

Samira
Founder of NAO Studios.
I have been working in the fashion industry for over 12 years. So both privately and professionally I have experienced different processes and mechanisms (and their impact) for the production of fashion along the entire value chain.
During this time, the fast fashion industry was booming and growing. New trends every 2 weeks, masses of clothes presented by successful influencers, good (expensive) marketing campaigns, ....
Fast fashion allows for the increasingly frequent consumption of fashion at very low prices that bear no relation to the actual cost of the products, which is borne by the seamstresses, producers and our planet.
Greenwashing, non-transparency, omission of facts...and already companies seem to be fair and sustainable without really doing anything for people and the environment.
I don't just question this construct, I want to change it together with many other activists and visionaries and support and grow the fair fashion sector.

Mohammed
Founder of the Eyes of Lights Foundation (EoL) in Ghana.
In 2010, after one of his trips to his hometown of Kumasi in Ghana, Mohammed decided that he could no longer simply stand by and watch the increasing misery and lack of prospects of the growing number of street children. He began to help, together with relatives, friends and neighbors, always on a completely private initiative, using his own resources and his own strength.

EoL has built a hostel for orphans and street children and intends to build 200 wells in villages that do not have their own water (dry areas of the WA region) to address the cause of the rural depopulation of these children.

EoL's projects also include free vocational training (tailoring) for destitute girls/women and now also young men in Tafo (suburb of Kumasi).
The training has started in 2019 and with NAO Studios we want to ensure the transition into a safe profession.

Team
Only together as a team have we made it this far. Each person brings corresponding strengths that together make up the big picture and thus NAO Studios.

Our story is the collective narrative of all the creators whose work flows together in a common legacy.
According to the motto "We rise when others rise" we support each other and have a common vision: To change the fashion world. To a world where fair, honest, radically transparent and sustainable fashion (production) is the norm.

Support us! The Future is NAO!

The Future is NAO! 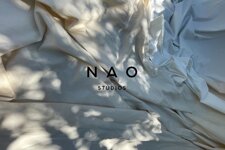 Not just another fashion brand
www.startnext.com