The "Beasts from the East" are leaving Dresden with their skateboards for a journey to a far eastern country to film a visuelle stunning multi-parted skateboard documentary in a way that hasn't been seen yet.

„The Beasts from the East“ are a young creative group of skateboarders from dresden germany. Together with the director sebastian linda, they made theirself the challenge to show skateboarding from a different site.
The last three parts have already been realized with unconventional tools, unusual perspectives, interesting people and a dynamic way of video editing.
That is why the videos got clicked over 700.000 times and made the beast episodes become famous around the world. Not even getting „staff pick“-ed on vimeo, the videos were also shown on many different film festivals, like the 5 point film festival (colorado, USA), the pause festival (melbourne, australia) and the epic tv film festival.
The next screening is going to be on the rider film festival in Sydney, where skateboard legends like tony hawk and steve caballero will attend. Also the last two parts were nominated for the g-technology driven creativity contest and both times they finished up within the top ten among of 1000 attendants.

The fourth part of the beast series is going to be a skateboard documentary in a way that is beyond belief. Until now all parts were filmed in Dresden and the potential was pushed to its limits. That is why Germany and its ongoing winter has to be left to travel over to south-east Asia. Over there it is about capturing unbelievable frames and discovering foreign cultures by skateboard. The supporters will be a part of this documentary too and they will help to make this series even more remarkable. Without any doubt this one is going to be the highlight of the beast episodes with many surprises that will be realized because of your help.

To sum up the previous clips of the series once more:

„The Journey of the Beasts“ is going to be the highlight of the already very successful beast series. The result will be splittet in different overwhelming parts that show how different cultures melt together with the help of skateboarding.

Of course the target group are skateboarders and people with a big passion to it. But also friends of the far eastern cultures will take delight in this 20 minute documentary.

The previous parts of the beast series was produced on their own funds and the videos were seen across the globe. Now everyone is able to add his/her part to this new project, since it is not possible to finance the whole thing on our own.

This project makes it possible for a few young people to get to know a far eastern country and to integrate by the help of their skateboards.
Skateboarding is more than just a hobby. Everyone who got to know this subculture will acknowledge that it is a creative and tolerant lifestyle, that makes it possible to explore different cultures on a new way.

With the help of this money it is possible to rent the camera equipment, to cover the travel-, production,- and insurance costs and also to produce the thank-you gifts. We´ll also gonna use the money for special equipment, like a flying camera drone or a high speed camera. And with a higher budget we can travel to more unusual places. 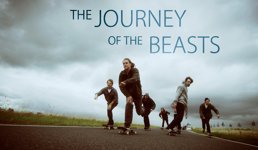 The Journey of the Beasts - A Skateboardjourney to SouthEast Asia
www.startnext.com