They pushed drugs, mugged people (with a special interest in jackets) and dealt blows. They were feared and despised. Back then, in the 90s, when they were still members of youth gangs in Frankfurt. But what happened to them afterwards? The documentary ‘Tokat’ portrays Hakan, Kerem, Dönmez and Oguz, now and then, and tells their stories. In doing so, the film opens the view on destinies beyond stereotypes and empty phrases concerning cultural policy and migration.

The documentary ‘Tokat – Life Strikes Back’ portrays Oz, Kerem, Dönmez and Hakan.
The guys have one thing in common: They are all natives from the village Bayat in East Anatolia and grew up together in Bornheim, a borough in Frankfurt, where they were members of notorious youth gangs. In the beginning of the 90s, they made the city insecure by numerous violent crimes, like jacket-tokat (the violent robbery of bomber jackets). Their image was spread very quickly – not least, because of the coverage in local and nationwide media.
Today, after 20 years, their lives have no parallels anymore. Kerem is an early-retired man, caused by his former Heroin consume. Dönmez was deported to Turkey, is father of a family and works in an apple juice factory. Ercan found his way out of the criminal milieu through his faith. Hakan was deported to Turkey in 1999 and works as agricultural worker at the foot of the mountain Ararat. Oguz has established himself as an artist and DJ.
Our film begins in the present age, which is captured through observations of the everyday lives of the men and concise interview situations. Linked to the memories and stories from their youth, ‘Tokat’, then, also betakes the viewer visually in to the past. The diverse habitats in Frankfurt and Anatolia, as teenagers and adults, somewhere between regret and nostalgia, become a dynamic and personal story, which ends in a big reunion of the five old companions.

With the help of our documentary ‘Tokat – Life strikes back’, we would like to give the dry debates around the integration topic a face – or four to be exact. We would like to provide our five protagonists a platform, so that they can tell their stories – beyond stalled catchwords of contemporary debates about integration, and beyond stereotypes of the integrated rapper and football player. Thus, our film targets a wide public sphere that deals with the integration question. At the same time, the film addresses teenagers, who are currently in a similar situation like our protagonists in the 90s – without prospects and willing to resort to violence.
Their stories clearly show how drastic decisions can influence young lives and their future. The protagonists tell what they would do differently today, if they could turn back time.

Maybe one of the below reasons apply to you:

1. You would like to help us to give Oguz, Kerem, Dönmez and Hakan a voice, in order to draw attention to the problems of young migrants.
2. You also believe that it is a good idea, to use the film for education purpose to serve teenagers as orientation.
3. You are interested in the destinies of our five protagonists and would like to know more about them.
4. You have a connection to the creative scene, hence you are aware that even a small contribution can have a huge impact on our work.
5. You are either related to one of us or a buddy who knows how important this film is to us.
6. You are from Frankfurt and would like to support two young filmmakers from your city
7. You always wanted to own a bomber jacket – but you never wanted to rob one.

The money is needed for the following:
- filming
- usage rights for archive-material and music
- cut, color correction and sound
- hard copies

Andrea Stevens, Director
Andrea is an educated film producer and editor and continuously proves her talent and expertise since more then seven years through contributions for TV. Thereby she is not even afraid of travelling into conflict areas, like she has demonstrated by filming a reportage about the situation of Syrian refuges for the Cinema for Peace Initiative. Her passion for travelling and her urge to search for interesting stories, motivated her three years ago to produce the documentary film Tokat together with her colleague Cornelia Schendel. Since then, she has invested a lot of time, blood, sweat and tears into the film. With her warm and accessible personality, she managed to make five reserved people to open themselves towards her. Finalizing ‘Tokat’ is one of her most important career targets-

Cornelia Schendel, Camera and Co-Dicretor
Authentic, reliable and professional – with these three skills Cornelia managed to establish herself as a camerawoman and cutter in a field of work that very strongly dominated by men. She has acquired her know-how through an apprenticeship as media designer as well as film relevant studies in Germany and Finland. Whether for companies, TV or the Internet: within the last four years Cornelia has contributed to the most diverse film projects and showed how versatile she is. For Cornelia ‘Tokat’ plays a decisive role for her career, too. Together wit Andrea she travelled into the deepest Turkish province and dealt with people she once has avoided because of their brutal image. Nevertheless, she manages to capture their stories unbiased and at eye level.

Brian Hüchtebrock, Recordist
Brian is an experienced recordist and works as freelancer. He works in the Frankfurt area for diverse TV productions. He has been part of the team since the beginning of the production process and is responsible for the sound.

Sanaz Nayeb, PR and Media Consultant
As MA-student of Media and Communications Management, Sanaz supports the young production team to draw attention to the film. She has created a crowdfunding strategy in order to motivate users to financially contribute to the film. Why she invests her time into the project is easy to answer: she loves documentaries, is impressed by the idea behind ‘Tokat’ and hopes that the film can open a few eyes. Despite that, she would like to apply her knowledge and her experience that she has acquired in the communications area, to the crowdfunding of projects and test its success. Afterwards, the results will flow into her Master thesis. With patience, perseverance and ambition she manages to stay focus on the target to generate 18,000 Euro by Nov 21st, 2013. 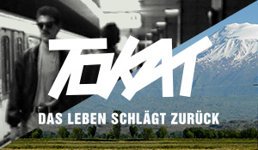