Crowdfunding finished
Adaptation of the story "Ugly Utopia" by Dan K. Sigurd, about a world that succumbs to the hallucinogen of an ancient creature from the jungle.

Charlott Roth Projektberater "Excellent crowd financing round, I am curious how this project will continue." 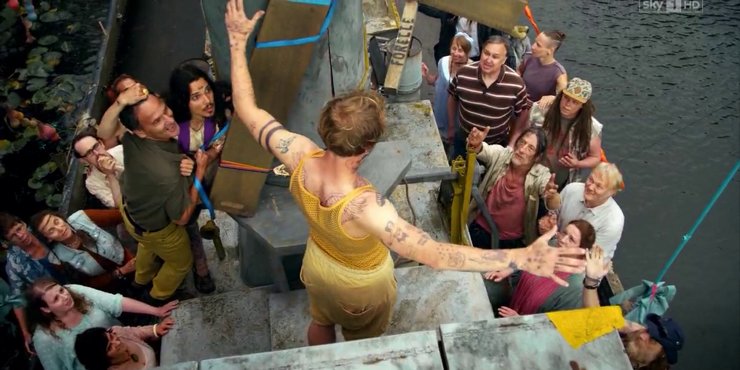 Dan K. Sigurd can currently be seen on Sky, playing "the Indian" in the series 8 Tage. He penned this story during the shooting.

0. found himself on the steps of a large building, right at the top, beside the entrance. At the bottom of the stairs the American President arrived and as he made his way up he was greeted by countless people. When he reached 0. he probably expected more adoration, but instead 0. said with a firm voice: "Please resign!", as he shook his hand.
"What...what is this?", the President stammered and stared at 0. in confusion for a few moments before abruptly turning around and heading inside.
0. followed him a few minutes later and joined a group of young people in a room with large windows.
He wanted to tell them about the things that had just unfurled, but suddenly he noticed something sticking to the window beside him. It was some kind of large slug that almost covered the entire glass with its body, and when 0. looked around he noticed countless creatures gliding up the windows all around him. Some of them began to break under their weight and in panic the mob stormed towards the cellar where they barricaded themselves.
In the small dark room it did not take long for violence to break out and 0. began to wrestle with a big, heavyset man who tried to rape one of the women that had locked herself in with them.
Finally the door swung open and a few men and women stormed inside, but somehow it was clear to 0. that they were the alien slugs from before, that had to be some sort of shapeshifters.
With a muffled scream he awoke and it took him a while to realize that it had all just been a dream. He grasped for the touchscreen on the nightstand beside him that was beeping loud and shrill and stared at its clock in disbelief. When he remembered that he would take part in a film shoot today he turned the alarm clock off and opened the shutters in front of his window that exposed a rainy, grey backyard.
'The perfect day for a summertime-scene out in nature!', 0. thought as he got dressed. There was no time for breakfast or shower and so he just hasted out the door where he opened his umbrella and headed for the subway. It took him to the city center where he ran through the rain once more, towards a row of buses. One of them turned out to be a shuttle for extras like him and after telling the man beside the door his name he climbed inside and sank down in one of the seats in exhaustion.
He stared through a veil of raindrops on the window, at the gigantic TV tower beside them, that was partially obscured by thick white clouds.
A man with some sort of pirates hat and dark glasses entered and sat down beside 0., who wondered if he was the last one. But they remained parked and 0 wished he had slept a little bit longer. When a bearded man in camouflage came in and took his seat they finally set in motion though, and made their way through the dirty, wet city, towards a small village at the outskirts of the town.
0. got out his touchscreen again and read the mail he had gotten a few weeks ago:

0. noticed that the other extras were lining up again and so he gathered his things and joined them. The head of the costume department took one last look at them and then they headed over to the set. After a short walk through bushes and mud a boat appeared behind the trees, with a huge smokestack, from which colorful ribbons were hanging.
0.boarded the ship, where he was told to stand in the bow.
"So you're making decorations out of these old CDs...", the bearded instructor told him, "...and then you hang them up over here!"
0. nodded and looked around at the numerous set pieces that surrounded him. He noticed a map of the world to his right, with a big black spot right in the middle of Europe. Dark crosses surrounded the epicenter and below the map it said:

in these few lines
let this stoned idiot savant
be your messiah
with these few rhymes
and tell you of the nearing doom
it will be here
very soon
I have felt it
in my bones
all those places
we call homes
will be wiped from the earth
without traces
all our faces
will melt
with the blast
of giant, fast
MUSHROOM
CLOUDS
that loom
beyond the horizon
of the next day
it will be here soon
I say! 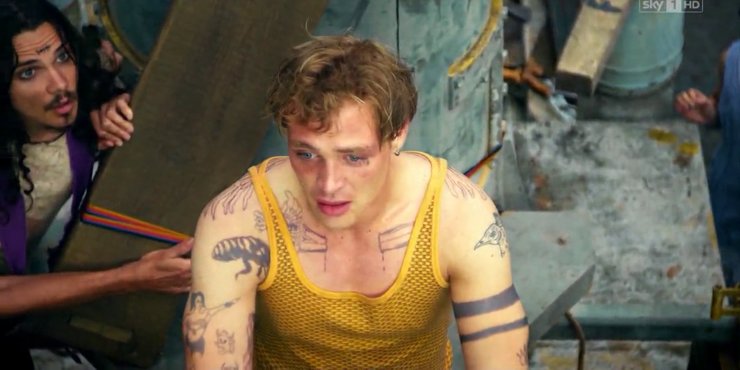 Pictures from the set of "The Ceremony"

Pictures from the last public reading of Ugly Utopia

Impressions from the Kickoff Party 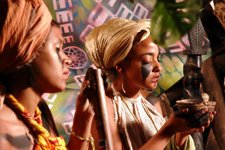