Crowdfunding finished
We need your help in bringing the Emmy-nominated film UNITED SKATES to Vienna! The story captures the struggle against structural racism and other forces that threaten to limit access to skating spaces in the US. In order to make the Vienna screening accessible (free) to all, regardless of financial circumstances, we are crowdfunding rather than selling tickets. With your support, UNITED SKATES will be an open air event at Karmelitermarkt on September 25, 2020.

Michael Schmidt Projektberater This time it didn't work out. I celebrate the project for the courage and all the learning moments.
Privacy notice
Privacy notice

In the past few months, global lockdowns and the phenomenon of TikTok helped roller skating surge in popularity in new communities. Online reports about the great “skate revival” and the “comeback of roller skates” popped up everywhere. The truth, however, is that roller skating never died! While many ordered their first pair of skates in spring, causing delivery bottlenecks for weeks, roller skating has had a continuous role in Black* communities in cities across the US, from the Civil Rights Movement until today. Roller rinks have thrived for years in certain areas, where they have established themselves as a cultural meeting point and community hub. Many skating styles, tricks and moves and the specific music created and curated to pair with different forms of rhythm and jam rollerskating have been significantly influenced and shaped by Black skaters.

The history of as well as current state of skating culture and the people who make it special is highlighted in the HBO documentary UNITED SKATES. The film also takes a look at major threats to skate culture today: increasing closings of roller rinks across the country and often preemptive and unwanted police presence at Black skating events. The 2019 film when seen today can serve as an important contribution to counteract the conspicuous whitewashing** of the skate community in 2020. Recently the film received an Emmy nomination in the category "Outstanding Arts and Culture Documentary".

Synopsis: When America’s last standing roller rinks are threatened with closure, a community of thousands battle in a racially charged environment to save an underground subculture-- one that has remained undiscovered by the mainstream for generations, yet has given rise to some of the world’s greatest musical talent.

** whitewashing is a racist media practice in which white actors, performers or models are preferred. In addition, e.g. in movies white actors are being hired to play characters who are actually not white. With regard to the roller skating scene, whitewashing in this context means that the media reporting primarily focuses on white skaters and leaves the black skate community outside and practically invisible.

Roller skating has also been enjoying growing popularity in Vienna for several years. Especially now in the summer, more and more people can be seen on classic quad roller skates throughout the city. There have been attempts to establish roller discos, roller derby has earned a permanent place in the city's sports life, and now there is a roller dance fitness class for the first time with Powerjam Skate Fitness. There is something going on in the urban skate community and the number of quad-skate fans (in this country people like to call them "Disco-Rollers") is increasing. Those of us active in the roller skating scene want to make roller skating more inclusive and accessible at all levels and be a positive force for sharing the full picture of skating’s history and the communities worldwide that make it special.
We believe a free open air screening of UNITED SKATES at the end of the skate-filled summer contributes to this effort.

The last few months and the rise of the Black Lives Matter movement have shown once again: systemic racism is a reality, not only in the USA. Even supposedly self-proclaimed inclusive communities like the skate community reproduce racist structures on many levels. With the film’s screening we want to enable some insight into the often unknown history of roller skating and thus counteract whitewashing. We support the slogan that emerged from the Black skate community: "All can skate here" !

If the financing is successful, we can expect an open air screening of the film UNITED SKATES in late summer on Friday, September 25th, with free entry at Karmelitermarkt. The event is carried out in cooperation with VOLXkino, the experts for open air cinema events in Vienna. Due to the current Corona situation, we have decided on an open-air event in compliance with all current security measures.

With the donations we want to cover the costs for the film copy and the handling of the event. We do not strive for profit and hereby would like to make all upcoming expenses 100% transparent:

Note: If the weather conditions are bad, we have set Saturday, September 26th as an alternative date. Should the event actually not be able to take place on both dates, we will of course return all contributions to donors.

The sports club Vienna Roller Derby and the people at Powerjam Skate Fitness. We are a collective of individuals who love roller skates and have been active in the skate community for several years. 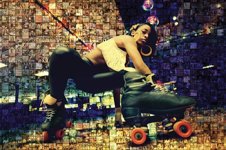