THE GENITAL WARRIORS is an 85-minute episodic ensemble and art-house film. We're now in the post-production and want to be ready for the Berlin Int. Film Festival in Feb. 2012. Please help us reach our goal after so many years of hard work!

The 85-minute dark comedy and ensemble film "The Genital Warriors" unites the fragmented perspectives of its protagonists in the past and in the present.

The 70-year-old philanderer, Frank, who’s stuck in a psychiatric ward, writes a screenplay about the loves of his life, Lena (69) and Barbara (68), whom he lost long ago and intends to win back.

The two elderly women meet by chance on a park bench high above the Elbe River. While telling each other their life stories, they find out that they were romantically involved with the same two men, Frank and Victor, and were betrayed by both. They decide to take revenge on them by traveling to the past with a phallic African magic wand.

On their multi-dimensional travels, Lena and Barbara repeatedly encounter their ex-boyfriends in different bodies and fight for the correct version of their common history. From an old pink cadillac and in an old Beatles venue, they assasinate Franks, Viktors and other male characters, but are unable to exterminate all of them because Frank is back working on his screenplay and resurrecting their doppelgangers.

But not only are Lena and Barbara part of his life story. To his dismay, Frank discovers that his psychiatrist, Dr. Reimenschneider, has always stood between him and the two women. Reality and film fantasy become increasingly intertwined.

My goal has always been to make high-quality and entertaining films that are also personal and reveal my vision of the world. My second film, THE 3RD RAIL, should also fill these criteria; It’ll be a story about my youth and have racism as its theme. But first we have to finish THE GENITAL WARRIORS! Our next objective is to finish the post-production and present the film at the Berlin International Film Festival, which will take place in February, 2012.

- Because so many friends and supporters of mine, including the actors and team members, have shown such incredible energy and stamina over the seven-year period of production that I financed by borrowing money and investing 100,000 euros.

- Because we currently need money to complete the film and apply for a slot at the Berlin International Film Festival in February, 2012.

- Because the post-production will be very important in determining the film’s final quality in terms of pictures and sound.

- And because by supporting this project, you’ll be contributing to the completion of a well-shot, modern and entertaining independent film.

- Me, Matthew Way: producer, writer and director who came to Hamburg ten years ago on a Fulbright Scholarship

- All of the actors, some of them very well known, who deferred their wages

- Dominik Friebel, the very talented cameraman and creative producer who has stuck with me from the very beginning

World Release on December 8, 2015, the 35th anniversary of John Lennon’s death, in 100+ countries and 19 languages. The film will be sold on iTunes, Amazon, Google, Vudu, as well as DVDs and Blu-Rays.
New York City Cinematic Run from Dec. 18-24 – Tickets now available here: http://www.cinemavillage.com/chc/cv/show_movie.asp?movieid=3545! 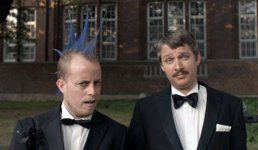