Crowdfunding finished
Our film is finally finished. It describes our four and a half year journey around the world by boat and bus and tells the story of all the adventures we experienced. It's all about the wonderful people we met, about freedom and friendship, and about how music magically connects everything. Help us bring this honest, real-life, and hopefully inspirational? story to the cinemas and reach as many people as possible.

Once we've made the first goal, we can create movie copies and go on a cinema tour in selected cities with our bus.

We have finished our movie "Blown Away" and now want to screen it in as many cinemas in Germany as possible.
"Blown Away" tells the story of our 4 1/2-year journey around the world with a small sailboat and an old school bus. We travelled from Australia to Southeast Asia, India, Africa, South America and North America and then back across the Atlantic to Europe.
In the beginning of the trip neither of us could sail but learning by doing seemed to work just fine for us. As we are both audio engineers, our motivation was to record as many musicians from as many different countries as possible and then produce a music record with these songs. We were lucky enough to record over 200 great artists who we met during the trip, creating a total of 130 songs, many of which you will hear in our film.
Through music we reached the hearts of the local people who always welcomed us with open arms. Everywhere - from Kashmir to Chicago.
We believe that our film can inspire people to look beyond their own horizons and get involved with the unknown. To trust yourself and others. We did that and returned as different people.

We want to bring our 130-minute movie to the cinemas without selling it to a distributor. In this way we can remain independent and decide for ourselves where and how long "Blown Away" will be shown in cinemas.
We believe the movie will appeal to all those who dream of a great journey, appreciate good music, feel like going on an extraordinary adventure, and those who have not lost their faith in humanity.

You help bring a good movie to the cinemas and support the independent film scene in Germany.

With your support we can start a cinema tour organized by ourselves. We would like to be in as many cinemas as possible and answer your questions after the movie.

In addition, we have prepared great rewards for you

With the money we can finance the first cinema copies and the necessary final work on the film. If we reach the second funding target, we will be able to call in a distribution company to help us distribute the film. The more money we raise, the more cinemas we can screen!

We are Benjamin Schaschek and Hannes Koch. We met in 2008 when we both studied audio engineering at the SAE in Berlin and then chose a slightly different career start. As "Sailing Conductors" we have already produced two albums with music from our trip.
For our film we have the support of "Jackhead", a small film production from our circle of friends. Micha Schulze cut our film from the 1500 hours of raw material in 9 months and Volker Wulf was responsible for graphic effects and titles. 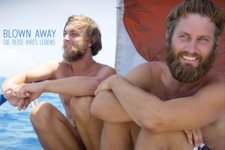 Blown Away - The journey of a lifetime
www.startnext.com