Crowdfunding finished
drinkforpeace is the most peaceful beer in the world. Our goal: Enjoy great beer and promote peace and tolerance. How do we do that? Together with craft beer brewers from Bosnia we managed to develop a delicious recipe. Our beer is brewed using delightfully flavored hops grown regionally which makes our beer taste genuine. How do we promote tolerance? With every refreshing sip you take you also fund humanitarian projects that focus on young people living in conflict-regions.

Charlott Roth Projektberater "Excellent crowd financing round, I am curious how this project will continue."
Privacy notice
Privacy notice

We travel to conflict stricken regions and talk to brewers of different nationalities and religions. Together we find a craft beer recipe which carries a strong message of hope and reconciliation.

10 cents for every bottle sold are diverted to project funding. The projects are mainly focused on eliminating prejudice in young people across the conflict stricken region. In Bosnia we will support the Mostar Rock School. One of the few institutions in Bosnia-Herzegovina, which gives all young people, regardless of ethnicity, a high-quality musical education. As a result of the refugee crisis, previous international sponsors have redirected their money, so that the survival is now in question.

We have been working on drinkforpeace for over a year now. We have visited ex-Yugoslav countries multiple times and have acquired the support of local beer brewers. Some of the leading German specialists for craft beer are supporting us as well.
Why have we chosen ex-Yugoslavia?

I myself have strong ties to ex-Yugoslavia as well as Yugoslav heritage. I know firsthand the difficulties that arose in postwar Yugoslav countries. Just because the war is over does not mean the wounds have healed.

With your support, we can achieve our goal and keep the dream about the most peaceful beer alive.

Ever since we started working on drinkforpeace we set a clear goal. We want to brew beer that is uniquely defined by promoting peace and tolerance.

Our target group: you and me! What we offer is a unique experience, to enjoy beer and contribute actively to reconciliation and tolerance. With every sip, you make the world a better place. Our goal is multipurposed and can be achieved by various products in many regions divided by conflict. We have begun our project with craft beer!

Why would you support this project?By supporting us you can help make the most peaceful beer and you will be one of the first people to have to opportunity to drink it. We promise to do everything possible to make this idea come true.

However there are some hurdles down the road. To be able to undertake a successful market entry the beer must be offered in bottles. In order to make the beer hold its taste and not spoil in at least 8 weeks the bottling process has to be done by a specialized filling plant. Unfortunately, the filling machines are large and the cleaning process of the machine is very expensive. This is why the bottle filling process only makes sense for quantities over 15000 bottles (50 hl).

By supporting us you can help make the most peaceful beer and you will be one of the first people to have to opportunity to drink it. We promise to do everything possible to make this idea come true.

With your help you make the creation of the first drinkforpeace craft beer possible. Our beer will be brewed and bottled by a medium-sized brewery according to our uniquely developed drinkforpeace recipe. After you have tried your first delicious drinkforpeace beer you will witness firsthand how the whole idea works. Your satisfaction matters greatly to the market launch itself.

The founders of drinkforpeace are Samir and Martin. We have been working on the drinkforpeace idea for over a year now with our loyal team members Lena, Jolanta and Haris. At the beginning the core of our idea was to drink a bottle of beer but at the same time support an idea. From this idea we developed a concept which has already been awarded. Meanwhile we have established a company and a non-profit organization.

The team: Martin is an economist and he knows his way around the sales department. Samir is a doctor of engineering with rich international experience. Lena studied culture and languages and she possesses knowledge concerning graphics and design. Jolanta has a master degree in sustainability management as well as a lot of experience with organizing Erasmus+ projects. Haris is a bachelor of international economics. 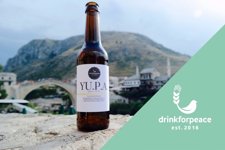