Crowdfunding finished
ENDLICH TACHELES! is a feature documentary film about Yaar, a rebellious young man who wants to retell the story of the Holocaust for his own generation. Yaar is 21 and considers himself to be the most un-Jewish Jew in the world. But one day, Yaar is threatened with a knife on the street – because he is Jewish. He is shocked and realizes that he cannot escape his origins. Yaar develops a controversial computer game which is set at the time of the Shoah, which eventually takes him to his roots.

We have filmed our protagonist Yaar and his family for three years in Germany, Poland and Israel.

Yaar was born in Israel, but grew up in Germany, far away from Judaism and the story of his grandparents. As a child, his grandmother Rina was smuggled out of the Płaszów concentration camp, along with her little brother. She never talked about what happened to her during this time. Yaar's father Ilei, who was born twenty years after the war, still suffers from the Holocaust today. Yaar accuses him of having established himself as a victim.

But one day, Yaar is attacked with a knife on the street because he is Jewish. For the first time, he himself feels like a victim. And he has an idea: With the computer game “Als Gott schlief” (“When God Was Asleep”), he wants to address the Holocaust in a way that history lessons cannot. Above all, he wants to take control of his own story.

Sarah and Marcel, two friends of Yaar’s, collaborate with him on the development of his computer game. Yaar decides to model one of the game’s protagonists, a little Jewish girl, after his grandmother Rina. Together with his friends, he visits Rina’s birthplace Krakow, where he uncovers a terrible family secret.

So begins a painful confrontation with their own history. Yaar has to find his way between the trauma of preceding generations and his own claim to an unburdened life.

The last witnesses of the Shoah will soon be gone, and textbooks alone are not enough to keep the memory alive. Yaar with his game, and we with our film, are taking steps in a new direction. Our protagonists are young, funny and daring. Their views are controversial and raise topical questions: What does the Holocaust have to do with me, personally, today? How do I deal with the fact that my ancestors were victims or perpetrators? And what is the difference between guilt and responsibility?

We are all connected to this part of history, no matter how aware we might be of the stories of our parents, grandparents and great-grandparents. With this film, we will reach today’s younger generation especially, since Yaar is one of them and speaks their language.

We are planning to have screenings at schools and educational institutions.

It's happening around us: There is an increasing number of hostilities against Jews, as well as voices that aim to close the book on the Holocaust, or even to minimize or relativize it. ENDLICH TACHELES! is taking a stand against such efforts.

With courage and radical openness, Yaar, his parents and grandparents have unveiled their hearts for this film, granting us insights into a family for which the Holocaust is still not over.

For us creators, ENDLICH TACHELES! is a project close to our hearts. We have financed it ourselves for many months in order to get it going. Since then, there have been a few grants that enabled us to complete most of the shooting.

However, the last quarter of the budget is still missing, and we’d like to tackle it together with you. We need your help in order to view about 100 hours of footage, to translate 15 hours of Hebrew conversations, and to draft and edit everything. The quality of the film will largely depend on how much time we will have available to shape the material into a powerful cinematic format. In the spring of 2019, we will do some final shooting, because the stories of the protagonists and the development of the game have continued.

We invite you to become part of ENDLICH TACHELES! and to support us not only with funds, but also with suggestions and practical actions. It is up to all of us to eventually show the film, to distribute it and to discuss it in cinemas, schools and memorials.

Jana Matthes & Andrea Schramm
We are fascinated and inspired by people. In more than 30 documentary films, we have told their stories and accompanied them through social and personal turbulences. Our strength lies in telling major social events in the form powerful, exciting individual stories. We have made and produced award-winning films for television. But the media landscape is changing, so we’d like to tread new paths with you in order to realize important projects.

For ENDLICH TACHELES!, we wrote the script and are directing and co-producing the film along with:

Gunter Hanfgarn
An experienced and committed producer who has produced several internationally successful documentaries, including on the subject of the Holocaust. "No Land's Song”, his last film, was nominated for the German Film Award.

Lars Barthel
A creative cameraman who has photographed many impressive movies. He captures Yaar's story in sensitive and visually powerful images.

Who supports us:
Prof. Dr. Andreas Nachama, Director of the Foundation Topografie des Terrors and Chairman of the General Rabbinical Conference Berlin
Dr. Anja Siegemund, Director of the Foundation Neue Synagoge Berlin - Centrum Judaicum
Dr. Ulrike Offenberg, Rabbi in the community in Hameln
Moshe Mendelssohn, Artist and survivor of the concentration camp Dachau
Yaar and his father Elieser (who developed the story together with us)
Yaar's mother Jasmin
Julia Jasjunas & Elenya Bannert 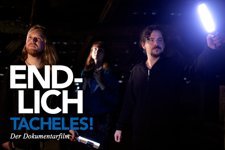