Crowdfunding finished
The photobook "Hollywood Calling" is about actors based in Hollywood. People whose life's work it is to act and would almost give anything to live their dream are the focus of my book. The images were taken on three trips and I spent a total of more then fifteen weeks all together in Los Angeles. I portrayed and interviewed around 60 actors in Los Angeles. This Crowdfunding helps me to afford the printing and graphicdesigncosts of this coffe table book.

People whose life's work it is to act and would almost give anything to live their dream are the focus of my book. The joy of acting is of more importance to them, than fame. To find and portray people from many different branches in the industry was very important to me. Like film, television and independent productions as well as voice and commercials. I also found waitresses, who only take weekend shifts, allowing them to do as many auditions as possible during the week.

Although it is an authentic approach, many of my photos are staged since I was so inspired by their acting and playing and it seems many times, that the images I have taken are movie stills. I was lucky enough to interview and photograph 60 different actors. Finding this many different personalities made it possible to display a wide range of different aspects of this extremely fascinating profession and to achieve a certain generality.
After the shooting I interviewed every actor and they gave me very deep insights into this often romanticized job, that requires a lot of endurance and devotion. From my recordings,I have selected quotations of every person I portrayed. They are about the joy of acting, hard work and hope. They were telling me what going to auditions feels like, their side jobs and. Luck and rejection.

All together the book involves around 110 pictures and as soon I raise the funding-goal, I would be able to start printing right away.

The over all goal has always been to bring together the photos and extracts from the interviews and to showcase my work in a book. This book is supposed to be printed right after this campaign (Hardcover, 24x28cm, 176 pages and approx.110 images of around 60 actors).

This publication will be a nice addition to people’s bookshelves, not only for photography-lovers, cineastes and actors but also for everyone who is interested in this occupation.

I was planning on producing a piece of art, that motivates and I am convinced it will motivate and inspire many. It was fascinating to see how determined the actors are and what they would do to pursue their dream. How they deal with disappointments and succuess and how they help each other out.

I was keen on creating a realistic image of the diversity of this profession and the people that live in Hollywood to live their dream.

If I don’t succeed in raising €13,500 I will ensure to produce the book. I will cover the remaining costs.

My name is Isadora Tast and I am a photographer for magazines and enterprises based in Hamburg. I have had the idea to realize this photo book and took the images and conducted interviews with the actors.
I am very happy that the author George Seeßlen has offered to contribute an essay and that the publisher "Fotohof edition" from Salzburg will publish "Hollywood Callng". 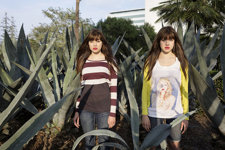