Crowdfunding finished
From May 29 to June 3, 2018, we can say once more: Raise the curtain for Nippon Connection! Throughout six days, we will present cinema, art, and culinary specialties from Japan in Frankfurt am Main for the eighteenth time. Are you looking for exciting films, electrifying concerts, and inspiring workshops? Or do you feel like having some sushi, ramen, and matcha cake? Then help us realize a festival with a unique atmosphere and many fascinating events!

For 7,000 € we can invite seven filmmakers and artists from Japan and reimburse their flight and hotel expenses.

It all started in the year 2000, when the Nippon Connection Film Festival, organized by students from Frankfurt’s Goethe University, first welcomed its guests and visitors. Nobody expected that, over the years, Nippon Connection would become the biggest festival for Japanese cinema worldwide. Today, the program regularly consists of more than 100 films and around 40 cultural events. The six locations include the festival centers Künstlerhaus Mousonturm and Theater Willy Praml in der Naxoshalle, as well as the German Film Museum, the Mal Seh'n Kino, the Theater Die Käs, and Ausstellungsraum Eulengasse.

Much has changed since the beginnings. Not only did the festival become larger and move away from its original location, but the organization team also developed professional structures without which the realization of events on such a scale (with more than 16,500 visitors!) would not be possible. However, the main objectives are still the same: to spark curiosity for Japanese culture, to inspire fascination for Japanese cinema, and last but not least: to bring people together!

Nippon Connection wants to present a diverse selection of Japanese films. Be it the latest blockbusters or independent productions, edgy animation or interesting documentary films – the majority of films in our line-up are usually not available anywhere else in Germany, whether in movie theaters or on TV or DVD.

Nippon Connection wants to offer a platform for the direct exchange between filmmakers and the audience. Every year, numerous guests from the Japanese film industry come to the festival in order to present their films, answer questions, and take in the feedback from the visitors.

Nippon Connection wants to create a unique atmosphere, foster encounters, and enable discoveries – not only for cinephiles, but also for shiatsu enthusiasts, tea gourmets, origami fans, and and and…

Even if it’s largely based on voluntary activities – a festival like Nippon Connection does not work without: money. These are some of the expenses that we have every year:

Add to that printing fees, costs for accounting, security, cleaning, and much more.

We do receive grants from the Federal State of Hesse and the City of Frankfurt, and we also have some sponsors. Still, financing the festival remains hard work. We are currently concerned about a rather substantial deficit caused by the withdrawal of various sponsors. Moreover, we are organizing our crowdfunding campaign without the financial support of Aventis Foundation this time.

That’s why we urgently need your help in order to maintain the rich variety offered by Nippon Connection! Support us, make sure to get some of our unique rewards, and tell all your family and friends about our project!

Nippon Connection provides cultural work recognized for its public utility. We do not make any profits from the festival. The money that we collect during this crowdfunding campaign will be invested entirely in the festival.

Without our Japanese guests, Nippon Connection would not be imaginable. With your support, we can invite filmmakers and artists from Japan and reimburse their hotel and travel expenses.

The festival is organized on a voluntary basis by the non-profit Nippon Connection registered association, with only a handful of salaried employees and freelancers. We are a team of around 70 members of all ages who sacrifice their spare time and who support the festival wholeheartedly. During the festival, we are assisted by more than 100 additional volunteers.

Who writes forty e-mails in the middle of the night? Who regularly attends team meetings on Sunday afternoons? Your Nippon Connection team, of course. Because there is always a lot of work to do... :)

Marion Klomfass is the festival director and one of the co-founders. She was already fascinated by Japanese films while still a student of theater, film, and media studies. She too works for Nippon Connection on a voluntary basis, her main occupation being an editor for TV programs. 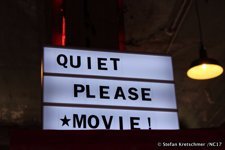