Crowdfunding finished
Based on Bram Stroker's novel “Drakula” and the silent film “Nosferatu - Symphony of Horror” broadcast in 1922, an open-air production will be presented in front of the historical backdrop of Wismar's old town. The up to 4.20 m tall figures, brought to life by actors and puppeteers, roam with the audience through the old town of Wismar and tell a scary and exciting vampire story in front of the original locations.

Our aim is to revive the cultural scene in our Hanseatic city and our region after the long Corona period, which was a heavy blow, especially for art and culture.
We have developed a form of street theater that has never existed before.
A mixture of large characters who are an absolute eye-catcher whenever they appear, a city tour through our UNESCO World Heritage City and a gripping play.

Our main goal is to finally see our large characters play theater.

What is the goal of this crowdfunding campaign?
The aim is to use the crowdfunding amount to put together a start-up financing package that should help the project in the long term to support itself through ticket income.

But above all we want to see our large characters play theater.

Who is the target group?
We are convinced that our large characters will not only cast a spell over Wismarans, but also everyone else who sees us live.

We can only tell you, we think the project is great. We are in the mood for this play. We had fun building. We have had fun with our shows so far and we have even had fun with the bureaucracy for the project.
Everyone who saw our large characters on our tours on the streets was immediately thrilled. We want to conjure up this radiant grin on the faces of many other viewers.

In order to be able to realize that, we need your help.

We have already designed three large figures and built them at a workshop with the help of our participants.
The play has been dramatically revised and is in the starting blocks.

- The donated money will be used to create four more large
characters.
- The play is performed by an ensemble consisting of
professional and amateur actors.
- During the process, exact character traits of the
figures will be developed such as the gait of the figure.
- We juse a silent disco audio system that allows us to transfer the spoken
word of the actor and the music of the silent scenes over
headphones directly to the ear of the
the viewer. This system gives a mutch greater viewing experience. It also has
the advantage that we can adhere future corona regulations by
a healthy distance among the spectators and we can reduce
the background noise in the streets to a minimum.

- Because our play was designed for a playing time of 5-10
years it is essential that we occupy the lead role with
a professional actor. In operation of the play, the fees are
based on the ticket revenues. At the beginning, however, a part
of the Start-up funding for the actors' rehearsal fees expended.

-The characters and actors need of course a decorative
drapery. This corresponds to the style of the 1910-20s.

- The stage design is thanks to our historical backdrop
not the biggest item on our agenda, however
just as essential to design the illusion in the end perfectly.

- Like every play, we too have costs that are hiding behind
the curtain. These include hand carts to move the figures,
advertising costs for flyers and the running costs of the
website.

The Nosferatour is a project of the Kulturmühle Wismar e.V.

We are an art and cultural association that has been realizing large and small art projects such as plays, readings and expressionist dance performances in our beautiful Hanseatic city for years. 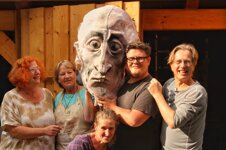