Crowdfunding finished
Our Piece of Punk – A queer_feminist view on the cake will appear as a book of 170 pages, including drawings, comics, written contributions, discussions and declarations of love about the possibilities and boundaries of queer feminism in punk. It's not focussing on ,once upon a time...' and Riot Grrrl-Nostalgia: Protagonists who currently love and live punk & DIY with all its ups and downs, get to talk and speak up.

Most of the meanwhile numerous books, focussing on feminism in punk, talk about protagonists and icons of the 70ies punk scene or portrait the Riot Grrrl movement in the early 90ies, as the measure for punk rock feminism. But what happened after that period? Punk is ultimately not dead – some say so at least – and up to this days critical voices aren't absent talking racism, sexism, homo- and trans*phobia in the punk scene. It's time to go on with these discussions, instead of letting them rest in resentment.

As editors and contributors, we see the necessity out of heart, to create an illustrated book about a punk scene these days, from a queer_feminist perspective.

Since late 2015 we are working on this project and because we decided to involve the current queer_feminist punk scene we collected contributions in our broader millieu. Musicians, concert-goers, festival organizers, punkettes, comic drawer or sound technicians, punk and DIY is the common thread. The book is filled to the top with point of views. Some agree, some don't: different sometimes similar, each of the almost 40 contributions, has it's own truth.

Musicians, concert-goers, punkette, comic lovers, subculture enthusiast, activist, curious – there is something for everybody in it!

Our Piece of Punk is a collection, exchange of experiences, polemic paper, a question of perspective, a snapshot and a declaration of love. Because punk is not just music, and being queer not an isolated identity. Both is part of the resistance against the destructive world we live in. Sharing is caring.

The money to its full extend will be used for the production and print of this book.

Through the Crowd Funding Campaign, we can keep the selling price low, without the loss of all the lil' specials and gimmicks ,like a mix tape – the official soundtrack to the book – and self adhesive tattoo stickers.

Besides the more ore less 40 authors, illustrators/comic artists, are Barbara Lüdde and Judit Vetter as editors the ones, who organize all the contributions and try to stay on top of things. Elinor Lüdde stands by our side for lektorship work.

The Book will be published by Ventil Verlag (Mainz) and released in March 2018.

Barbara:
Barbara (Gwaendo) is annoyed on a daily base about role patterns. But since she isn't down with being pointlessly annoyed and stagnant, she directs that energy in her drawings. Besides all this she tries to enjoy life and finishing her masters in Illustration, the latter will probably happen sooner. Sarcasm and irony are her favorite kind of humor. If there is spare time, she loves drawing posters for DIY shows. She doesn't follow up any hobbies but her newest passion is Thai Boxing in a WLTI*-Crew.
In the end, she steadily exerts herself.

Judit:
Laughs, lives, crafts and draws at the moment 695km north of zurich, after trying to make herself a home / squatting in a lot of different places. They enjoy playing bass while screaming, love bicycles, loitering on flea markets an never get caught at […] They are studying illustration at HAW Hamburg and are exited, that the HAW is encouraging and supporting projects like this. 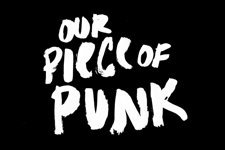 Our Piece of Punk
www.startnext.com