Crowdfunding finished
Since a strong political and economical crises destabilized the country in 2014, Brasil has found its way back to nationalism and conservatism. Minorities fear for their lives and women - especially black, indigenous and trans women - have to be constantly fighting for basic rights. The film follows closely the lives of female musicians and their work fighting with their music against oppression and inspiring women across Latinamerica to stand up for their rights.

With the first goal, we would like to finance part of the travel expenses for our team and cover the equipment costs.

Music
Music is a universal language that reaches places where education and empowerment have failed to arrive. In places like favelas and ghettos, the brazilian funk culture and rap have grown strong. Many women are using these platforms, as performers, to bring awareness about domestic violence, reproduction rights, gender issues and to discuss female sexuality openly.

Politics
​The political role of music has been present in the country's history since the colonial times. From Samba to Capoeira, Brazilian Funk to Rap and from Bossa Nova to Tropicalia, music has been used as a powerful tool of political resistance. Specially during the military dictatorship from 1964-1985, when many artists and musicians who criticized the regime or spoke about themes considered too liberal, were tortured and murdered Today, Brazil lives again in difficult times, where populism and fascism have divided the country . The position of the government has been made clear: with the Minister of Culture citing Joseph Goebbels, the Nazi Minister of Propaganda, and the president cutting culture funds and censoring art works.

The situation in Brazil
In the last 3 years, more then 40 artistic works have been censored, because they handled themes such as Racism, Religion, Gender, Feminism or criticized directly the government. Brazil is also to date the 4th land in the world with the highest number of activists assassinated. In these numbers is also the murder of Marielle Franco. In 2019 she was shot four times inside her car for being the most voted gay black woman in Brazil and fighting strongly against the violence of the military police in black communities. Two of the musicians in the film were close friends to her and have been personally received threats against their lives.

The film
Iin dark times, music finds a way to rise against oppression and women are fighting loudly with their voices. Portraits of Resistance follows closely the lives of female musicians and their work fighting for democracy and human rights with their music. They are powerful voices from the favelas, the LGBTQ+ Scene and the feminist movements. They inspire women in a land divided by politics and hate, to stand up for their rights and fight for their freedom - whatever it means.

Portraits of Resistance is about the power of music in the fight for rights. The film has to reach not only the public in Film Festivals, but also people who don't have access to such spaces. We will present Portraits of Resistance worldwide and organize film-screenings with NGOs & Cultural Organizations all over the world. We will also use every opportunity of showcasing the film: on the Internet, Film Festivals and television programs. But our main focus remains in showcasing the film to the people who urgently need support to find their own voice resisting intolerance and injustice, mainly in South America, but also across the globe.

Brazil's political situation makes the dangers of populism and conservatism clear and women, in particular, experience sexism and violence on a daily basis. Many also must deal with racism, homophobia and censorship every single day. But music finds its way into every corner and brings strength to minorities fighting to survive.
There are brave Brazilians fighting against oppression with their music and they won't be stopped by death threats or the violence that surrounds them.
We want to give these women a voice. On the big screen or smartphone screen, films inform and inspire in deeper levels. Especially today, in times of populism and exclusion, we feel the responsibility to make the protest of these musicians as loud as we can.
With your support, their stories will be heard and inspire many more.

With a successful funding campaign, we have the opportunity to shoot the film in Brazil and later work on the post-production in Germany.

...and some more. We are working with more artists and personalities, so follow us on Instagram for more updates: @portraits_of_resistance

after a long time of wait because of the Corona crises, we are happy and hopeful about the end of this year. We expect to be able to fly to Brazil till then and make our film happen.
A big part of our team is already vaccinated and we hope that Brasil soon also sees better times.

Thank you for your patience and support! Soon we can make this project come to life! 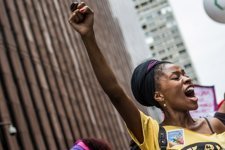